View Solution
Try yourself:Consider a rotating disk cam and a translating roller follower with zero offset. Which one of the following pitch curves, parameterized by t, lying in the interval 0 to 2π, is associated with the maximum translation of the follower during one full rotation of the cam rotating about the center at (x, y) = (0, 0)?

From all the four options the maximum amplitudes is in point ‘C’ as t = 0. 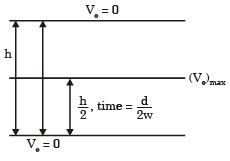 View Solution
Try yourself:A flat -faced follower is driven using a circular eccentric can rotating at a constant angular velocity ω. At time t = 0, the vertical position of the follower is y(0) = 0, and the system is in the configuration shown below. 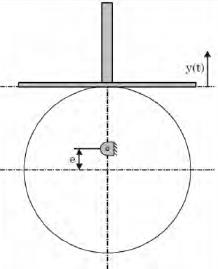 The vertical position of the follower face, y(t) is given by

View Solution
Try yourself:In a cam design, the rise motion is given by a Simple Harmonic Motion (SHM)

where h is total rise, θ is camshaft angle, β is the total angle of the rise interval. The jerk is given by

The jerk is given by