The document GATE Past Year Questions: Free & Forced Convection Notes | EduRev is a part of the Chemical Engineering Course Heat Transfer.
All you need of Chemical Engineering at this link: Chemical Engineering
Try yourself:Match List-I with List-ll and select the correct answer using the code given below the lists:
List-I
A. Grashof number
B. Schmidt number
C. Weber number
D. Fourier number

View Solution
Try yourself:For the three-dimensional object shown in the figure below, five faces are insulated. The sixth face (PQRS), which is not insulated, interacts thermally with the ambient, with a convective heat transfer coefficient of 10W/m2K. The ambient temperature is 30°C. Heat is uniformly generated inside the object at the rate of 100 W/m3. Assuming the face PQRS to be at uniform temperature, its steady state temperature is 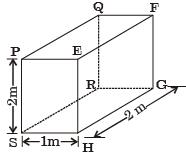 If q"w = 5000 and the convection heat transfer coefficient at the pipe outlet is 1000 W/m2K, the temperature in °C at the inner surface of the pipe at the outlet is View Solution
Try yourself:For laminar forced convection over a flat plate, if the free stream velocity increases by a factor of 2, the average heat transfer coefficient​

View Solution
Try yourself:In the laminar flow of air (Pr = 0.7) over a heated plate, if δ and δT denote, respectively, the hydrodynamic and thermal boundary layer thicknesses, then

View Solution
Try yourself:For a hydrodynamically and thermally fully developed laminar flow through a circular pipe of constant cross-section. The Nusselt number at constant wall heat flux (Nuq) and that at constant wall temperature (NuT) are related as

(Nu)q for constant wall heat flux and (Nu)T at constant wall temperature for a hydrodynamically and thermally fully developed laminar flow through a circular pipe of constant cross-section is 4.36 and 3.66 respectively.

View Solution
Try yourself:The wall of a constant diameter pipe of length 1 m is heated uniformly with flux q” by wrapping a heater coil around it. The flow at the inlet to the pipe is hydrodynamically fully developed. The fluid is incompressible and the flow is assumed to be laminar and steady all through the pipe.
The bulk temperature of the fluid is equal to 0°C at the in let and 50°C at the exit. The wal l temperatures are measured at three locations, P, Q an d R as shown in the figure. The flow thermally develops after some distance from the inlet. The following measurements are made : 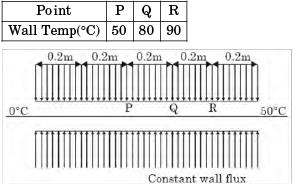 Among the locations P, Q and R, the flow is thermally at : 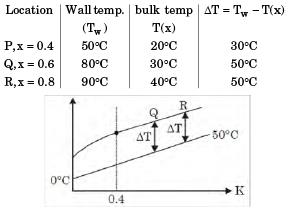 So, Q and R in thermally developed region.