View Solution
Try yourself:Water has a critical specific volume of 0.003155 m3/kg. A closed and rigid steel tank of volume 0.025 m3 contains a mixture of water and steam at 0.1 MPa. The mass of the mixture is 10 kg. The tank is now slowly heated. The liquid level inside the tank

vc = 0.0031 m3/k g
v2 = 0.025/10 = 0.0025  m3 kg
as (vc > v)
As heat is supplied the amount of steam in mixture will decrease and pressure will increase, because volume of mixture is less than critical volume. The final state will move towards saturated liquid line. Hence level of liquid in tank will rise.

View Solution
Try yourself:Which combination of the following statements is correct?
P : A gas cools upon expansion only when its Joule-Thomson coefficient is positive in the temperature range of expansion.
Q : For a system undergoing a process, its entropy remains constant only when the process is reversible.
R : The work done by a closed system in an adiabatic is a point function.
S : A liquid expands upon freezing when the slope of its fusion curve on pressureTemperature diagram is negative.

W
Hence work acts as the point function.
2. Liquid expands upon freezing when the liquid is water. In case of water the slope of fusion curve is negative. 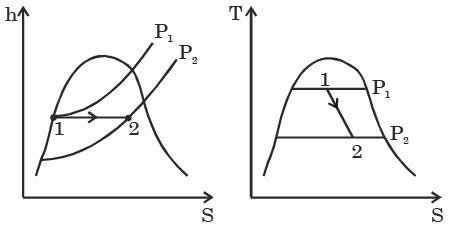 View Solution
Try yourself:Constant pressure lines in the superheated region of the Mollier diagram will have

View Solution
Try yourself:Which one of the following statements is correct for a superheated vapour?

View Solution
Try yourself:The INCORRECT statement about the characteristics of critical point of a pure substance is that

View Solution
Try yourself:At the triple point of a pure substance, the number of degrees of freedom is