The document Gaseous Introduction (Part - 3) Chemistry Notes | EduRev is a part of the Chemistry Course Physical Chemistry.
All you need of Chemistry at this link: Chemistry

Due to collisions between molecules, velocity as well as direction of the movement, also changes.  Thus their kinetic energies as well as, velocities are redistributed.  Hence, the molecules, move with different velocities and their kinetic energies are also different.  Boltzmann, gave the following expression, for the distribution of energy between molecules.

In 1860, J.C maxwell gave a law, by using the theory of probability, which is known as Law of Distribution of molecular velocities. According to this law, velocities of the molecules are distributed from zero to a great range. By using Boltzmann’s equation and probability theory.  Maxwell derived a simple expression, which show that the actual distribution depends on temperature and molecular weight of the gas. The mathematical expression for the Maxwell’s distribution law is :

velocities are between c and (c + dc). (Where dc, represents a very small difference).  M, molecular weight R gas constant, T absolute temperature and e is base of natural logarithm equation (2) can also be written as

where P = Probability of the molecule, whose velocity is between c and (c + dc) i. e. probability (P) is plotted against co-ordinate axis and velocities of the molecule c, on the abscissa, three different curves I, II and III are obtained at three different temperatures T1, T2 and T3 respectively, where (T3 > T2 > T1).  This type of curve at constant temperature is known as distribution curve.  Following observation can be made from the curve in:

(i) The number of molecules having very low and very high velocities is very low.

(iii) Curve is asymmetrical and has clear maxima. At every temperature most of the molecules, have the velocity of the maxima.  This value of velocity is known as most probable velocity and is denoted by α.

(iv) Curve is asymmetrical near maxima, hence most probable velocity does not coincide with average velocity.

(v) Effect of temperature on distribution of Velocities – T3 > T2 > T1 respectively, which show that by increase in temperature fraction of molecules having velocity higher than a definite value.

It is evident from figure that the fraction of molecules, having velocity more than a reference point is low at temperature T1. For 1 mole of an ideal gas

With these, the above equation becomes

and is known as the Boltzmann constant. Its value is given by

15. Derivation of some expression from the Maxwell Distribution

1. Average Speed: The average value of speed is given by the relation

where dNu is the number of molecules having speed u.  The summation of different speeds is replaced by integration since all types of speed raning from zero to infinity are involved.

It is the speed possessed by maximum fraction of molecules at particular temperature. 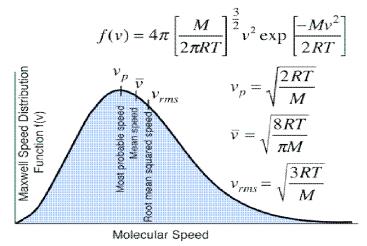 16. Mean free path: A very important quantity in kinetic theory of gases is the mean free path. ₹, defined as the mean distance travelled by a gas molecule between two successive collisions. Evidently,

[collisions made by one molecule]

From eq. 4, we see that λ ∝ 1/P, i.e. the mean free path of a gas molecule is inversely proportional to pressure. This fact is of tremendous importance in vacuum system. It should be borne in mind that at a atm pressure, λ is very small compared with the macroscopic dimensions (such as 1 cm) which implies that the molecules collide with one another far more frequently than they collide with the walls of the container and that a molecule moves a distance of several molecular diameters before colliding with another molecule.

17. Law Of Equipartition of Energy

If the energy of a molecule can be written in the form of a sum of terms, each of which is proportional to the square of a velocity component (or to the square of a position coordinate), then each of these square terms contributes (1/2) kT to the average energy.

The translational energy of a gas molecule is

is defined as For linear molecule

Real gases show deviations from the perfect gas law because molecules interact with each other.  Repulsive forces between molecules assists expansion and attractive forces assist compression. 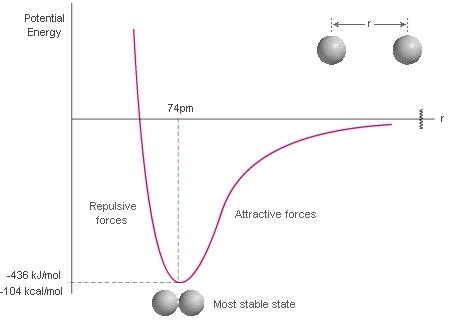 18. Deviation from Ideality and Compression factor 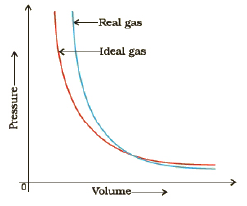 The compression factor, Z of a gas is the ratio of its molar volume, Vm, to the molar volume of a perfect gas,  at the same pressure and temperature :

Because the molar volume of a perfect gas is equal to RT/P, an equivalent expression is

19. Causes of Deviations from Ideal Behaviour

The ideal gas law can be derived from the kinetic theory of gases which is based on the following two important assumptions :

(i) The volume occupied by the molecules is negligible in comparison to the total volume of the gas.

(ii) The molecules exert no forces of attraction upon one another.

It is because neither of these assumptions can be regarded as applicable to real gases that the latter show departure from the ideal behaviour.

The molecules of a gas, however, do occupy a certain volume as can be seen from the fact that gases can be liquefied and solidified at low temperatures and high pressures. On decreasing the temperature of a gas, the thermal energy of molecules is decreased and the effect of applying high pressure is to bring the molecules closer to one another, thereby increasing the forces of attraction among them. Both these factors favour liquification and solidification.

where b is called the excluded volume or co-volume.  The numerical value of b is four times the actual volume occupied by the gas molecules. This can be shown as follows :

If we consider only bimolecular collisions, then the volume occupied by the sphere of radius 2r represents the excluded volume per pair of molecules as shown in figure. (volume occupied by a molecule)

Since b represents excluded volume per mole of the gas, it is obvious that