Gasification of Coal, Petrocoke and Biomass

Gasification of coal, petrocoke, biomass and other carbonaceous materials to produce synthesis gas has gained significant economic and environmental importance in the recent years. Although the technology of gasification or partial oxidation of heavy feedstock is quite established for over half century, however the technology of gasification has undergone continuous developments over years to tackle higher ends of refinery bottoms, petrocoke, coal and biomass

Gasification technology offers the cleanest and most efficient way to convert low and/or negative value carbon based feed stock to syngas. Indian context of gasification is given in Table M-II 3.2. Synthetic gas can ultimately replace natural gas for Industrial uses, electrical power generation and basic raw material to produce chemical and fuel oil. Commercial Success of Gasification Technology will depend on the advancement of technologies such as:

The feed for Gasification can be

Under the process of UCG, gasification of coal happens in situ by controlled burning. About 350m3 of gas can be produced per tone of coal. Bye products of significant importance are hydrocarbon, phenols, anhydrous ammonia, and clean water. In UCG overcomes hazard of underground and open cast mining and ash/slag removal is not required as they remain in the cavities. Some of the advantages of UCG are tapping of energy from vast coal reserves which are not economically viable to mine, increased worker safety, low environmental impact, increased worker safetySurface Gasification

Surface gasification involves reaction of coal with hot steam and controlled amount of air or oxygen under high temperature and pressure. Produces synthetic gas which can be used be the substitute of Natural gas, for power generation using low Btu gas as fuel, manufacture of chemicals and fertilizer and conversions to liquid fuel by GTL liquid.

Process Steps in GasificationVarious process steps involved in gasification are :

Feed Preparation: Wet feed system or dry feed system may be used in gasification. Wet feed system employ grinding and slurring with water and pumping to gasifier while dry system consist of grinding of the feed and employ lock hopers to pressurize the feed

Gasification: Gasification is carried out at temperature between 900-1100oC. carbon react with oxygen and steam to raw synthesis gas( CO and H2) and some minor by products which is removed to produce clean synthesis gas which can be used as fuel , for generation of steam and electricity or may be used as chemical feed stock.

Syn gas cooling: High temperature syn gas produced from gasification is cooled Air Separation Unit: The process produces oxygen for gasification. The process is based on cryogenic separation of air. The process involves liquefaction of air and fractionation to get oxygen, nitrogen and other gases.
Acid Gas Removal: This involves removal of impurities like H2S, COS, NH3 and HCN by absorption using various commercial solvent like mono-ethanol amine (MEA), methyl diethanol amine (MDEA), methanol rectisolvent and Selexol . The solvent is regenerated by stripping the acid gases and recycle.

Slag Handling System: The gasifier may be either slagging or non slagging.

Various types of gasifier used are mention in Table M-II 3.3 and shown in Figure M-II 3.2 below:

It is exothermic and produces a gas containing mainly CO and H2. The raw synthesis gas contains small quantities of CO2, H2O and H2S and impurities, such as CH4, NH3, COS, HCN, N2, Argon and ash, the quantities being determined by the composition of the feedstock, the oxidant and actual gasification temperature (1300-1400oC). A small amount of unconverted carbon is also present and ranges from 0.5 to 1.0 by percent wt in liquid feedstock or 50-200 ppm wt in gaseous feedstock. The various reactions can be summarized as follows 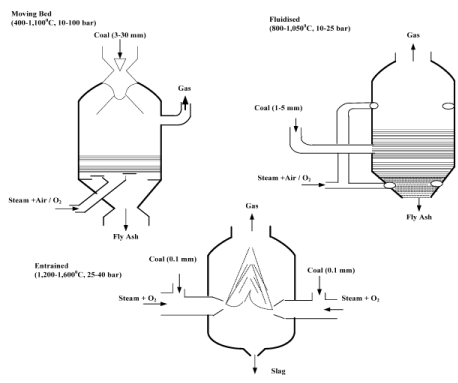 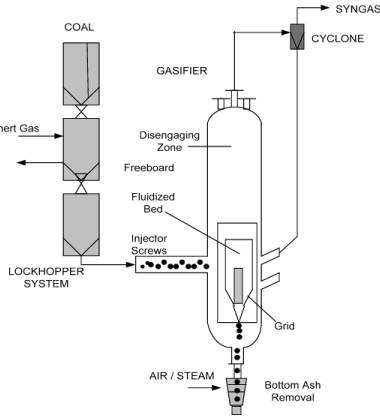 Coal Gasification in fertilizer Industry: Coal gasification fro production of synthesis gas and ammonia has being used many part of the world where large quantity of coal is present. However, higher energy consumption in coal based ammonia plant has been major constrain.  Relative energy consumption per tonne of ammonia is given below.

There has been extensive research for improvement of coal gasification technology to improve the efficiency and reduce the cost.

RTP TM is fully heat integrated technology that yields over 70percent liquid products from typical biomass feed stocks. It is a fast thermal process where biomass is rapidly of heated in the absence of oxygen. The biomass is vaporized and the vapour cooled to generate high yields of pyrolysis oil. Typical yield of various biomass is given in Table M-II 3.4. Chemical and biochemical conversion of biomass to biofuel is shown in Figure M-II 3.4 and Figure M-II 3.5 respectively.