Hello Aspirants,as we all know only few days are left for IBPS SO exam.So, we are starting a new series ” Gem points ” in this regard.We will post 50 points daily in two posts( 25 each ).learn them by heart.Share and discuss in comment section.We will gear up level day by day starting from very basics.So,Put your Seatbelts on and join us in the journey to be a specialist officer.

1)  The Open Systems Interconnection (OSI) model is a reference tool for understanding data communications between any two networked systems. It divides the communications processes into seven layers. Each layer both performs specific functions to support the layers above it and offers services to the layers below it. The three lowest layers focus on passing traffic through the network to an end system. The top four layers come
into play in the end system to complete the process.

An Overview of OSI model 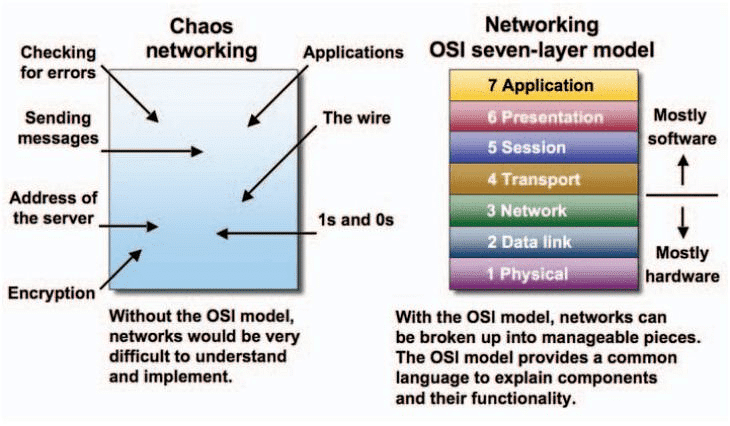 – Please Do Not Throw Sausage Pizza Away
or Please Don Not Touch Superman Private Area  (naughty one :P) 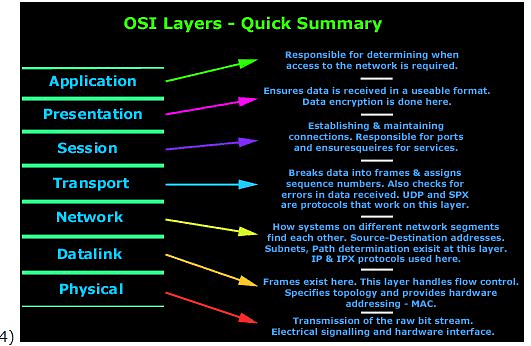 5) Layer 1 – The Physical Layer
The physical layer of the OSI model defines connector and interface specifications, as well as the medium
(cable) requirements. Electrical, mechanical, functional, and procedural specifications are provided for sending
a bit stream on a computer network.

6) Components of the physical layer include:

7) In a LAN environment, Category 5e UTP (Unshielded Twisted Pair) cable is generally used for the physical layer
for individual device connections. Fiber optic cabling is often used for the physical layer in a vertical or riser
backbone link. The IEEE, EIA/TIA, ANSI, and other similar standards bodies developed standards for this layer.
Note: The Physical Layer of the OSI model is only part of a LAN (Local Area Network).

8) Layer 2 – The Data Link Layer
Layer 2 of the OSI model provides the following functions:
• Allows a device to access the network to send and receive messages
• Offers a physical address so a device’s data can be sent on the network
• Works with a device’s networking software when sending and receiving messages
• Provides error-detection capability

9) Common networking components that function at layer 2 include:
• Network interface cards
• Ethernet and Token Ring switches
• Bridges
NICs have a layer 2 or MAC address. A switch uses this address to filter and forward traffic, helping relieve
congestion and collisions on a network segment.

10) Bridges and switches function in a similar fashion; however, bridging is normally a software program on a CPU,
while switches use Application-Specific Integrated Circuits (ASICs) to perform the task in dedicated hardware,
which is much faster.

11) Layer 3 – The Network Layer
Layer 3, the network layer of the OSI model, provides an end-to-end logical addressing system so that a packet
of data can be routed across several layer 2 networks (Ethernet, Token Ring, Frame Relay, etc.). Note that network layer addresses can also be referred to as logical addresses.

12) Initially, software manufacturers, such as Novell, developed proprietary layer 3 addressing. However, the networking industry has evolved to the point that it requires a common layer 3 addressing system. The Internet
Protocol (IP) addresses make networks easier to both set up and connect with one another. The Internet uses
IP addressing to provide connectivity to millions of networks around the world.

13) To make it easier to manage the network and control the flow of packets, many organizations separate their
network layer addressing into smaller parts known as subnets. Routers use the network or subnet portion of
the IP addressing to route traffic between different networks. Each router must be configured specifically for
the networks or subnets that will be connected to its interfaces.

14) Routers communicate with one another using routing protocols, such as Routing Information Protocol (RIP)
and Open version of Shortest Path First (OSPF), to learn of other networks that are present and to calculate the
best way to reach each network based on a variety of criteria (such as the path with the fewest routers).
Routers and other networked systems make these routing decisions at the network layer.

15) When passing packets between different networks, it may become necessary to adjust their outbound size to
one that is compatible with the layer 2 protocol that is being used. The network layer accomplishes this via a
process known as fragmentation. A router’s network layer is usually responsible for doing the fragmentation.
All reassembly of fragmented packets happens at the network layer of the final destination system.

16) Two of the additional functions of the network layer are diagnostics and the reporting of logical variations in
normal network operation. While the network layer diagnostics may be initiated by any networked system, the
system discovering the variation reports it to the original sender of the packet that is found to be outside normal network operation.

17) The variation reporting exception is content validation calculations. If the calculation done by the receiving system does not match the value sent by the originating system, the receiver discards the related packet with no
report to the sender. Retransmission is left to a higher layer’s protocol.
Some basic security functionality can also be set up by filtering traffic using layer 3 addressing on routers or
other similar devices.

18) Layer 4 – The Transport Layer
Layer 4, the transport layer of the OSI model, offers end-to-end communication between end devices through a
network. Depending on the application, the transport layer either offers reliable, connection-oriented or connectionless, best-effort communications.
Some of the functions offered by the transport layer include:
• Application identification
• Client-side entity identification
• Confirmation that the entire message arrived intact
• Segmentation of data for network transport
• Control of data flow to prevent memory overruns
• Establishment and maintenance of both ends of virtual circuits
• Transmission-error detection
• Realignment of segmented data in the correct order on the receiving side
• Multiplexing or sharing of multiple sessions over a single physical link
The most common transport layer protocols are the connection-oriented TCP Transmission Control Protocol
(TCP) and the connectionless UDP User Datagram Protocol (UDP).

19) Layer 5 – The Session Layer
Layer 5, the session layer, provides various services, including tracking the number of bytes that each end of
the session has acknowledged receiving from the other end of the session. This session layer allows applications functioning on devices to establish, manage, and terminate a dialog through a network. Session layer
functionality includes:
• Virtual connection between application entities
• Synchronization of data flow
• Creation of dialog units
• Connection parameter negotiations
• Partitioning of services into functional groups
• Acknowledgements of data received during a session
• Retransmission of data if it is not received by a device

22) Whether a designed to be a humorous extension or a secret technician code, layers 8, 9, and 10 are not officially part of the OSI model. They refer to the non-technical aspects of computer networking that often interfere with the smooth design and operation of the network.

24) Layer 9 is generally referred to as the “blinders” layer.