1 Joint Hindu Family: The amendment in the Hindu Succession Act, 2005, entitled all adult members – Hindu males and females to become coparceners in a HUF. They now enjoy equal rights of inheritance due to this amendment. On 1st February 2016, Justice Najmi Waziri gave a landmark judgement which allowed the eldest female coparceners of an HUF to become its Karta.

Partnership Vs. Co-Ownership or joint ownership i.e. the relation which subsists between persons who own property jointly or in common.

The following chart illustrates the various kinds of partnership: 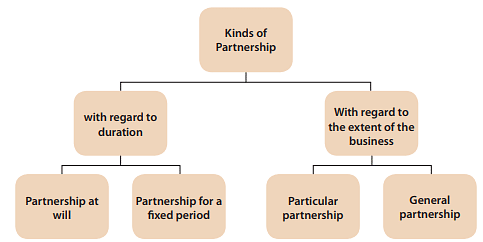 The various kinds of partnership are discussed below:

1. no fixed period has been agreed upon for the duration of the partnership; and

2. there is no provision made as to the determination of the partnership.

Where a partnership entered into for a fixed term is continued after the expiry of such term, it is to be treated as having become a partnership at will.

A partnership at will may be dissolved by any partner by giving notice in writing to all the other partners of his intention to dissolve the same.

1. Name of the partnership form.

2. Names of all the partners.

3. Nature and place of the business of the firm.

4. Date of commencement of partnership.

5. Duration of the partnership firm.

6. Capital contribution of each partner.

7. Profit Sharing ratio of the partners.

8. Admission and Retirement of a partner.

9. Rates of interest on Capital, Drawings and loans.

10. Provisions for settlement of accounts in the case of dissolution of the firm.

11. Provisions for Salaries or commissions, payable to the partners, if any.

12. Provisions for expulsion of a partner in case of gross breach of duty or fraud.

A partnership firm may add or delete any provision according to the needs of the firm.

Based on the extent of liability, the different classes of partners are:

Active or Actual or Ostensible partner:

They are called as ‘sleeping’or ‘dormant’ partners. They share profits and losses and are liable to the third parties for all acts of the firm. They are, however not required to give public notice of their retirement from the firm.

Nominal Partner: A person who lends his name to the firm, without having any real interest in it, is called a nominal partner.

He is not entitled to share the profits of the firm. Neither he invest in the firm nor takes part in the conduct of the business. He is, however liable to third parties for all acts of the firm.

Outgoing partner: A partner who leaves a firm in which the rest of the partners continue to carry on business is called a retiring or outgoing partner. Such a partner remains liable to third parties for all acts of the firm until public notice is given of his retirement.

Partner by holding out (Section 28): Partnership by holding out is also known as partnership by estoppel. Where a man holds himself out as a partner, or allows others to do it, he is then stopped from denying the character he has assumed and upon the faith of which creditors may be presumed to have acted.

A person may himself, by his words or conduct have induced others to believe that he is a partner or he may have allowed others to represent him as a partner. The result in both the cases is identical.

Example: X and Y are partners in a partnership firm. X introduced A, a manager, as his partner to Z. A remained silent. Z, a trader believing A as partner supplied 100 T.V sets to the firm on credit. After expiry of credit period, Z did not get amount of T.V sets sold to the partnership firm. Z filed a suit against X and A for the recovery of price. Here, in the given case, A, the Manager is also liable for the price because he becomes a partner by holding out (Section 28, Indian Partnership Act, 1932).

It is only the person to whom the representation has been made and who has acted thereon that has right to enforce liability arising out of ‘holding out’.

You must also note that for the purpose of fixing liability on a person who has, by representation, led another to act, it is not necessary to show that he was actuated by a fraudulent intention.

The rule given in Section 28 is also applicable to a former partner who has retired from the firm without giving proper public notice of his retirement. In such cases a person who, even subsequent to the retirement, give credit to the firm on the belief that he was a partner, will be entitled to hold him liable.

Example: A partnership firm consisting of P, Q, R and S. S retires from the firm without giving public notice and his name continues to be used on letterheads. Here, S is liable as a partner by holding out to creditors who have lent on the faith of his being a partner.