The document General Properties of Embryonic Development (Part - 2) NEET Notes | EduRev is a part of the NEET Course Biology Class 12.
All you need of NEET at this link: NEET 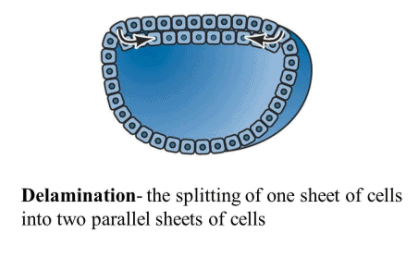 1. The growth phase is the longest phase during male gametogenesis. But in human oogenesis, maturation phase is longest.

2. The acrosome of sperm are produced by golgibodies.

4. 74 days are required to complete the cycle of spermatogenesis in human being.

6. Deficiency in the number of sperms result in sterility  which is known as oligospermia.

7. Absence of sperms in semen is known as azoospermia.

8. Formation of yolk in oogenesis takes place in the growth phase.

10. Although normal number of sperm are present in semen but if these are completely non motile. This condition is known as necrospermia.

11. Smallest egg in birds is of humming bird.

12. Due to high mortality rate in lower animals, the production of egg is more.

13. Sequence of egg production is as follows.

14 Cat and rabbit both are induced ovulator.

15. The life span of eggs in female reproductive organs  in human being is 48 hrs.

16. The nucleus of egg is known as germinal vesicle.

17. At the age of 45-50 yrs. in female the ovulation process will stop which is known as menopause.

19. Cortical granules are absent in rat.

20. Mosaic type of cleavage is found in the parasite Echinococcus granulosus.Special features of some animals :

(a) Sperms of some animals are not having flagella : eg.

(3) In crab and lobster the sperm are tail less and have three sharp processes.

eg. In toad fish (Opsansus) head of many sperms unite together and form sperm boats.

In Gastropods, the sperms are hexaflagellated.

(v) Hook like - eg. Rat.Germinal layers and their derivatives

The following description gives an account of the respective organs formed by the three germ layers. Most of the organs are the product of combination of more than one germ layers.

1. Skin(epidermis) and their pigment cells. (D) islets of Langerhans In addition to the above, the glands of gastrointestinal tract, major part of prostate etc. are also formed by endoderm.