Now taking logarithms on both sides, we find

Now the product of the ratios.

4. If G1 , G2……, are the geometric means of different groups having observations n1 , n2………respectively, then the G. M. (G) of composite group is given by 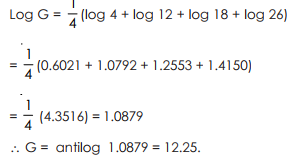 Steps to calculate G. M.
1. Take logarithm of all the values of variate x.
2. Multiply the values obtained by corresponding frequency
3. Find f log x and divide it by f , i.e., calculate

4. Now antilog of the quotient thus obtained is the required G. M. The idea given above will be clear from the following example.

Advantages Geometric Mean
(i) It is not influenced by the extreme items to the same extent as mean.
(ii) It is rigidly defined and its value is a precise figure.
(iii) It is based on all observations and capable of further algebraic treatment.
(iv) It is useful in calculating index numbers.

Disadvantages of Geometric Mean :
(i) It is neither easy to calculate nor it is simple to understand.
(ii) If any value of a set of observations is zero, the geometric mean would be zero, and it cannot be determined.
(iii) If any value is negative, G. M. becomes imaginary. [Use. It is used to find average of rates of changes.]