Channel degradation refers to the general lowering of the bed elevation that is due to erosion. In some cases, the bed material is fine and degradation will result in channel incision as shown in Figure 4. The phenomenon of degradation occurs when the sediment load being transported by a river is less than sediment transporting capacity of the river and the excess sediment needed to satisfy the capacity of the river will be scoured from erodable riverbed. Degradation results in channel incision and milder slopes, often this phenomenon is observed downstream of a dam constructed on a river (Figure 5).

Dams constructed on rivers alter the equilibrium of flow of water and sediment in alluvial channels. Reservoirs tend to decrease the magnitude of flood flows by moderating them as a flood flows through, and conversely, they increase low flows by releasing the stored flood water at that time. The clear water release from the dam also causes the reach below the dam to degrade in the form of a wedge starting below the dam. The magnitude and extent of the degradation below the dams depends on the reservoir size and operation and on the size and availability of the alluvium below the dam.

A phenomenon related to streambed degradation is armouring, where the coarsening of the bed material size results during degradation as finer particles get washed away. When the applied bed shear stress is sufficiently large to mobilize the large bed particles, degradation continues when the bed shear stress cannot mobilize the coarse bed particles, an armour layer forms on the bed surface. The armour layer becomes coarser and thicker as the bed degrades until it is sufficiently thick to prevent any further degradation.

When the sediment transporting capacity of a river at a point becomes less than the sediment load being carried, as a result of reduction the velocity due to an increase in cross section or reduction in slope of the river, the excess sediment get deposited on the river bed. As a result the riverbed rises, the phenomenon being termed as aggradation. Often this phenomenon is noticed on the upstream of a dam (Figure 6), where the velocity of water in the reservoir is reduced as a result of increase in flow depth.

Figure 6. Longitudinal river profile showing sediment deposition on riverbed in the reservoir behind a dam

Channel aggradation may also occur in a river reach if due to geological reasons (say, increase of erosion of the catchment) the sediment load being conveyed to the river increases than that can be carried by the river in equilibrium. As a result the riverbed rises (Figure 7a) and forces the channel to carve out its path in a braided fashion (Figure 7b) For braided rivers, there is a tendency for stream to widen and become very shallow with bars subjected to rapid changes in morphology. At high flows braided streams have a low sinuosity and often appear to be straight at low flows, numerous small channels weave through the exposed bars.

Aggradation also occurs in a channel when there is a decrease of bed slope for example as the river emerges from the hills and enters relatively flat land. This has occurred markedly in the river Kosi, which has forced the river to change its course by more than a hundred kilometer westward in the last 200 years.

Bars refer to large bed forms on the bed of a river that are often exposed during low flows (Figure 8) these deposited segment mounds are not static and often get transported under high flows. They may again appear when the flow subsided but may not necessarily at the same location as the earlier ones.

Alternate bars form in straight channels with deposits alternation from right bank to left bank. This type of bar forms where the Froude number of the river flow is high and the Shields parameter is close to incipient motion. Point bars form due to the presence of secondary flow of river bends (Figure 9). 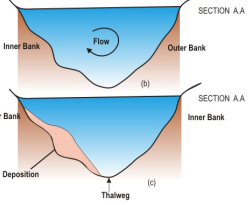 Figure 9. Secondary flow in river beds (a) Streamlines in plan at different levels;(b) Rotation movement of water in river cross-section ; and (c)    Effect of secondary flow : deposition on inner bankfcompare point bars in fig 8 b)

As may be seen from the figure at river bends, there is a perceptible flow in a plane perpendicular to the river flow direction. At the outer bank the secondary flow causes erosion and at the inner bank it causes deposition, thus giving rise to point bar formation. The locus of the deepest points of the river along the length is called the thalweg. Most thalwegs pass through a succession of pools in the channel bed that are separated by riffles which might be sedimentary bed forms or bed rock ledges. The pools and riffles of the streambed cause the thalweg to have an irregular slope, rising and falling in the downstream direction.

A river that winds a course not in a straight line but in a sinusoidal pattern (Figure 10) is called a meandering river. 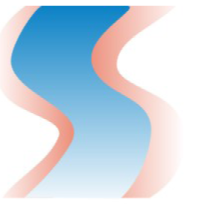 It is the continued action of the secondary flow developed on the river bends that cause further erosion on the outer bank and deposition on the inner bank. The meandering action increases the length of the stream or river and tends to reduce the slope.

Many scientists have suggested different reasons for meandering to happen. The principles of external hypothesis have been used to explain the phenomenon like that of minimum variance proposed by Langbein and Leopold in 1962. The minimization involves the planimetric geometry and the hydraulic factors of depth, velocity and local slope. Mathematical explanations have also been put fort by Yang in 1976 that started the time rate of energy expenditure explains the formation of meandering streams. Other like Maddock (1970) and Chang (1984) use the principle of minimum stream power Julien (1985) treated meandering as a variation problem in which the energy integration corresponds to the functional variational problem, the solution of which is the sine-generated curve.

Quantitavely, scientists like Chitale (1970) argue that the primary cause of meandering is excess of total sediment load during floods. A river tends to build a steeper slope by depositing the sediment on the bed when the sediment load is in excess of that required for equilibrium. This increase in slope reduces the depth and increases the width of the river channel if the banks do not resist erosion. Only a slight deviation from uniform axial flow is then required to cause more flow towards one bank than the other. Additional flow is immediately attracted towards the former bank, leading to shoaling along the latter ascending the curvature of the flow and finally producing meanders in its wake.

Lateral movement of rivers and its bank instability

Channel meandering is a result of an ongoing bed and bank deformation by the flow in a self formed alluvial channel thus the meander sinuosity increases with the passage of time (Figure 11).

In the above figure it is clear that the increase in sinuosity of a meandering river is associated with riverbank retreat. In some rivers, like Kosi the river has shifted or migrated laterally over large distances (predominantly in the westward direction). Here too the action is due to riverbank retreat, though the river doesn’t display meandering significantly hence bank erosion is inseparably connected to lateral river migration.

Bank erosion consists of the detachment of grains or assemblages of grains from the bank, followed by fluvial entrainment. Though the riverbed may be composed of non-cohesive alluvial material the banks, on the other hand, may be composed of cohesive or non-cohesive soils. Cohesive, fine-grained bank material is easily eroded by the entrainment of the aggregates or the crumbs of the soil rather than individual particles, which are bound tightly together by electro-mechanical cohesive forces. Non-cohesive bank material is usually detached grain by grain and may leave a pronounced notch marking peak stage achieved.

When a section of bank-line fails and collapses lots of bank material slide or fall towards the toe of the bank. They may remain there until broken down insitu or entrained by the flow. Mass failures can be analyzed in geotechnical slope stability terms or as the result of fluvial and gravitational forces, which overcome resisting forces of friction, interlocking and cohesion, some of the bank failure modes are given in Figure 12.

With increase or decrease of predominant flow and sediment load of a river, there is a change in river bed level, as discussed in 2.9.2 to 2.9.4. Although changes in channel depth caused by aggradation or degradation of the river bed can be simulated, changes in width cannot. When attempting to model a natural system like fluvial morphology this is a significant limitation because channel cross section usually changes with time, and adjustment of both width and depth (in addition to changes in planform, roughness and other attributes) are quite common.

River with adjustments may occur due to a wide range of morphological changes and channel responses. It may be widening (Figure 13) or narrowing (Figure 14). 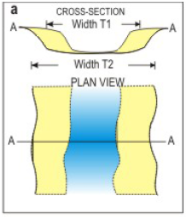 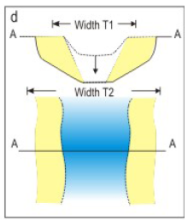 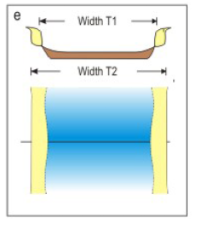 Widening can occur by erosion of one or both banks without substantial incision (Figure 13a). Widening in sinuous channel may occur when outer bank retreat, as in a meandering channel Figure 13b. In braided rivers, bank erosion by flows deflected around growing braid bars is a primary cause of widening (Figure 13c). In degrading streams widening often flows the incision of the channel when the increased height and steepness of the banks causes then to become unstable (Figure 13d). Widening in coarse-grained, aggrading channels can occur when flow acceleration due to a decreasing cross sectional area, coupled with current deflection around growing bars, trigger bank erosion (Figure 13e).

Narrowing of rivers may occur through the formation of in-channels berms, or benches at the margins (Figure 14a). Berm or bench often grows when bed levels stabilizes following a period of degradation and can eventually lead to creation of new, low- elevation flood plain and establishment of narrower quasi equilibrium channel. Narrowing in sinuous channels occur when the rate of alternate or point bar growth exceeds the rate of retreat of the cut bank opposite (Figure 14b). In braided channels, narrowing may result when a marginal anabranch (on offshoot channel) in the braided system is abandoned (Figure 14c). Sediment is deposited in the abandoned channel until it merges into the floodplain. Also, braided bars or islands may become attached to the floodplain, especially following a reduction in the formative discharge (Figure 14d). Island tops are already at about the flood plain elevation and attached bars are built up to flood plain elevation by sediment deposition on the surface of the bar, often in association with establishment of vegetation.