3.1 The Globalization of Business

The globalization of business is bound to affect you. Not only will you buy products manufactured overseas, but it’s highly likely that you’ll meet and work with individuals from various countries and cultures as customers, suppliers, colleagues, employees, or employers. The bottom line is that the globalization of world commerce has an impact on all of us. Therefore, it makes sense to learn more about how globalization works. 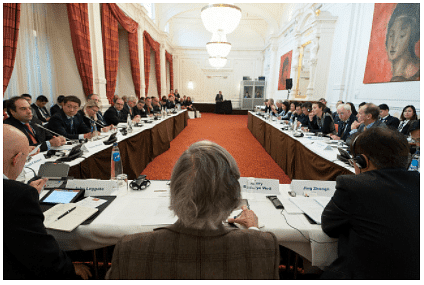 Why Do Nations Trade?

Why does the United States import automobiles, steel, digital phones, and apparel from other countries? Why don’t we just make them ourselves? Why do other countries buy wheat, chemicals, machinery, and consulting services from us? Because no national economy produces all the goods and services that its people need. Countries are importers when they buy goods and services from other countries; when they sell products to other nations, they’re exporters. (We’ll discuss importing and exporting in greater detail later in the chapter.) The monetary value of international trade is enormous. In 2010, the total value of worldwide trade in merchandise and commercial services was $18.5 trillion (World Trade Organization, 2011).

To understand why certain countries import or export certain products, you need to realize that every country (or region) can’t produce the same products. The cost of labor, the availability of natural resources, and the level of know-how vary greatly around the world. Most economists use the concepts of absolute advantage and comparative advantage to explain why countries import some products and export others.

How can we predict, for any given country, which products will be made and sold at home, which will be imported, and which will be exported? This question can be answered by looking at the concept of comparative advantage, which exists when a country can produce a product at a lower opportunity cost compared to another nation. But what’s an opportunity cost? Opportunity costs are the products that a country must decline to make in order to produce something else. When a country decides to specialize in a particular product, it must sacrifice the production of another product.

Let’s simplify things by imagining a world with only two countries—the Republic of High Tech and the Kingdom of Low Tech. We’ll pretend that each country knows how to make two and only two products: wooden boats and telescopes. Each country spends half its resources (labor and capital) on each good. Figure 3.2 “Comparative Advantage in the Techs” shows the daily output for both countries: High Tech makes three boats and nine telescopes while Low Tech makes two boats and one telescope. (They’re not highly productive, as we’ve imagined two very small countries.)

Figure 3.2 Comparative Advantage in the Techs 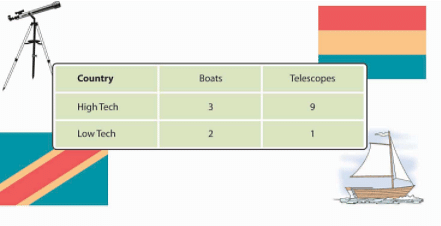 First, note that High Tech has an absolute advantage (relative to Low Tech) in both boats and telescopes: it can make more boats (three versus two) and more telescopes (nine versus one) than Low Tech can with the same resources. So, why doesn’t High Tech make all the boats and all the telescopes needed for both countries? Because it lacks sufficient resources to make all the boats and all the telescopes, High Tech must, therefore, decide how much of its resources to devote to each of the two goods. Let’s assume that each country could devote 100 percent of its resources on either of the two goods. We’ll pick boats as a start. If both countries spend all their resources on boats (and make no telescopes), here’s what happens:

Now to telescopes. Here’s what happens if each country spends all its time making telescopes and makes no boats:

Each country will specialize in making the good for which it has a comparative advantage—that is, the good that it can make most efficiently, relative to the other country. High Tech will devote its resources to telescopes (which it’s good at making), and Low Tech will put its resources into boat making (which it does well). High Tech will export its excess telescopes to Low Tech, which will pay for the telescopes with the money it earns by selling its excess boats to High Tech. Both countries will be better off.

Things are a lot more complex in the real world, but, generally speaking, nations trade to exploit their advantages. They benefit from specialization, focusing on what they do best, and trading the output to other countries for what they do best. The United States, for instance, is increasingly an exporter of knowledge-based products, such as software, movies, music, and professional services (management consulting, financial services, and so forth). America’s colleges and universities, therefore, are a source of comparative advantage, and students from all over the world come to the United States for the world’s best higher-education system. 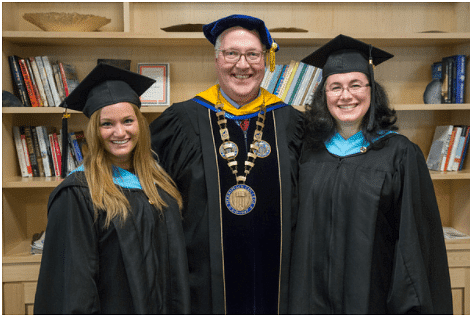 Many people study in the United States to take advantage of one of the world’s premier education systems.

France and Italy are centers for fashion and luxury goods and are leading exporters of wine, perfume, and designer clothing. Japan’s engineering expertise has given it an edge in such fields as automobiles and consumer electronics. And with large numbers of highly skilled graduates in technology, India has become the world’s leader in low-cost, computer-software engineering.

How Do We Measure Trade between Nations?

To evaluate the nature and consequences of its international trade, a nation looks at two key indicators. We determine a country’s balance of trade by subtracting the value of its imports from the value of its exports. If a country sells more products than it buys, it has a favorable balance, called a trade surplus. If it buys more than it sells, it has an unfavorable balance, or a trade deficit.

For many years, the United States has had a trade deficit: we buy far more goods from the rest of the world than we sell overseas. This fact shouldn’t be surprising. With high income levels, we not only consume a sizable portion of our own domestically produced goods but enthusiastically buy imported goods. Other countries, such as China and Taiwan, which manufacture primarily for export, have large trade surpluses because they sell far more goods overseas than they buy.

Are trade deficits a bad thing? Not necessarily. They can be positive if a country’s economy is strong enough both to keep growing and to generate the jobs and incomes that permit its citizens to buy the best the world has to offer. That was certainly the case in the United States in the 1990s. Some experts, however, are alarmed at our rapidly accelerating trade deficit. Investment guru Warren Buffet, for example, cautions that no country can continuously sustain large and burgeoning trade deficits. Why not? Because creditor nations will eventually stop taking IOUs from debtor nations, and when that happens, the national spending spree will have to cease. “Our national credit card,” he warns, “allows us to charge truly breathtaking amounts. But that card’s credit line is not limitless” (Buffet, 2006).

By the same token, trade surpluses aren’t necessarily good for a nation’s consumers. Japan’s export-fueled economy produced high economic growth in the 1970s and 1980s. But most domestically made consumer goods were priced at artificially high levels inside Japan itself—so high, in fact, that many Japanese traveled overseas to buy the electronics and other high-quality goods on which Japanese trade was dependent. CD players and televisions were significantly cheaper in Honolulu or Los Angeles than in Tokyo. How did this situation come about? Though Japan manufactures a variety of goods, many of them are made for export. To secure shares in international markets, Japan prices its exported goods competitively. Inside Japan, because competition is limited, producers can put artificially high prices on Japanese-made goods. Due to a number of factors (high demand for a limited supply of imported goods, high shipping and distribution costs, and other costs incurred by importers in a nation that tends to protect its own industries), imported goods are also expensive (The Japan FAQ, 2006).

Note: Figures are for “goods” only, not “goods and services.”