The full clover interchange eliminates all crossing movement conflicts by the use of weaving sections. This weaving section is a critical element of cloverleaf design. It replaces a crossing conflict with a merging, followed some distance farther by a diverging conflict. There are two points of entry and exit on each through roadway. The first exit is provided before the cross road structure allows right turn movements. The second exit, immediately after the cross road structure, allows for left turn movements. A weaving section is created between the exit and entry points near the structure. Sufficient length and capacity is to be provided to allow for a smooth merging and diverging operation.

Cloverleaf design requires only one bridge. In this respect, it is the cheapest form providing for elimination of all crossing maneuvers at grade. Although full cloverleaf interchanges eliminate the undesirable crossing movements of diamond interchanges, they have the disadvantages of greater travel distances, higher operating costs, difficult merging sections, circuity of travel, large areas for loops, sight distances to exits at the other side of the bridge, confusion caused by turning right to go left and large rights-of-way occasioned by the radius requirements necessary for satisfactory speeds on the ramps. 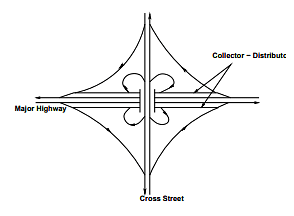 This is another variation of the cloverleaf configuration. Partial clover leaf or parclo is a modification that combines some elements of a diamond interchange with one or more loops of a cloverleaf to eliminate only the more critical turning conflicts. This is the most popular freeway -to- arterial interchange. Parclo is usually employed when crossing roads on the secondary road will not produce objectionable amounts of hazard and delay. It provides more acceleration and deceleration space on the freeway. 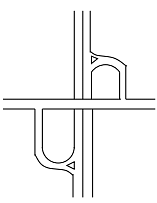 A Directional interchange provides direct paths for left turns. These interchanges contain ramps for one or more direct or semi direct left turning movements. Interchanges of two freeways or interchanges with one or more very heavy turning movements usually warrant direct ramps, which have higher speeds of operation and higher capacities, compared to loop ramps. Some designers do not favor entrance of merging traffic in the left lane, which is a characteristic of most direct-connection bridges. The principal limitations of this type of interchange is higher cost of construction and requirement relatively large amount of land when compared to the diamond interchanges and in some cases than cloverleaf interchange. Various combinations of directional, semi directional and loop ramps may be appropriate for certain conditions. They are the basic patterns that use the least space, have the fewest or least complex structures, minimize internal weaving and appropriate for the common terrain and traffic conditions. 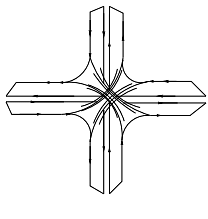