An acceleration lane is defined as extra pavement, of constant or variable width, placed parallel or nearly so, to a merging maneuver area to encourage merging at low relative speed. The major difference in opinion concerning acceleration design stems from lack of information on driver performance. Field observations have indicated that drivers desire to follow the direct path even though extra width or tapered section is provided. The length of acceleration lanes are determined by two factors: (1) Time required for drivers to accelerate to the speed of the preferential flow from the speed of entry into the acceleration lane and (2) Maneuvering time required as a supplement to the sight distance which is provided in advance of the acceleration lane. Taper distances are based upon a lateral transition time of about 1/3 sec/ft of displacement. 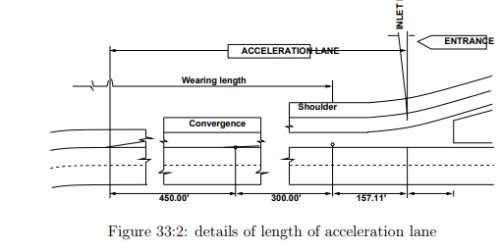 Deceleration lanes are defined as extra pavement of constant or variable width, placed parallel or nearly so, to a diverging maneuver area to encourage diverging at low relative speed. The lengths of deceleration lanes are based on the difference in the speed of traffic of the combined flow (in advance of the collision area) and the speed at which drivers negotiate the critical diverging channel curve, as well as the deceleration practices of drivers. These deceleration lane lengths are based on the assumed performance of passenger vehicles only. Extra allowance must be made for grades and for trucks with different deceleration characteristics. In the figurebelow, Form A design is more economical when large speed differentials are to be overcome. Form B could be advantageous by contrasting pavement colors and Form C design is more convenient for drivers when small speed differentials are to be eliminated. 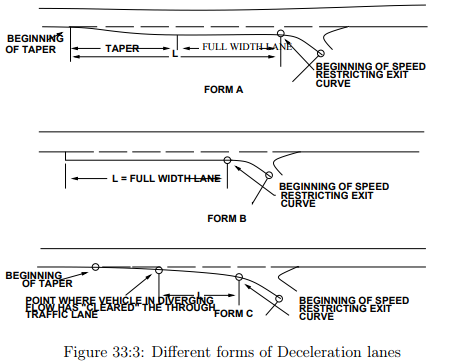 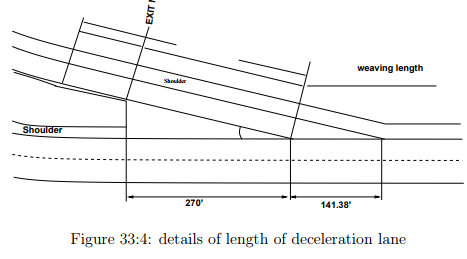 As we discussed earlier, grade-separated intersections are provided to separate the traffic in the vertical grade. But the traffic need not be those pertaining to road only. When a railway 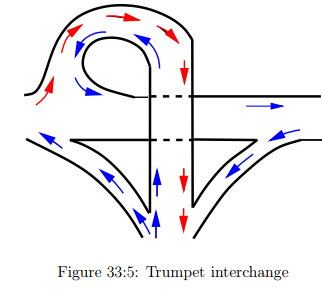 line crosses a road, then also grade separators are used. Different types of grade-separators are flyovers and interchange. Flyovers itself are subdivided into overpass and underpass. When two roads cross at a point, if the road having major traffic is elevated to a higher grade for further movement of traffic, then such structures are called overpass. Otherwise, if the major road is depressed to a lower level to cross another by means of an under bridge or tunnel, it is called under-pass. Interchange is a system where traffic between two or more roadways flows at different levels in the grade separated junctions. Common types of interchange include trumpet interchange, diamond interchange , and cloverleaf interchange.

3. Clover leaf interchange: It is also a four leg interchange and is used when two highways of high volume and speed intersect each other with considerable turning movements. The main advantage of cloverleaf intersection is that it provides complete separation of traffic. In addition, high speed at intersections can be achieved. However, the disadvantage is 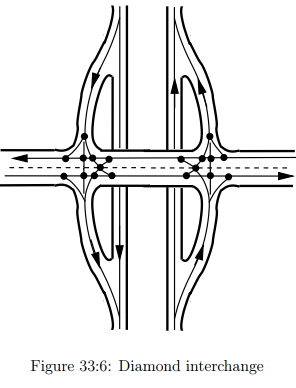 that large area of land is required. Therefore, cloverleaf interchanges are provided mainly in rural areas. A typical layout of this type of interchange is shown in figure 33:7.