The grading characteristics are then determined as follows:

Both Cuand Cc will be 1 for a single-sized soil.Cu > 5 indicates a well-graded soil, i.e. a soil which has a distribution of particles over a wide size range.

Cc between 1 and 3 also indicates a well-graded soil.Cu < 3 indicates a uniform soil, i.e. a soil which has a very narrow particle size range.

The consistency of a fine-grained soil refers to its firmness, and it varies with the water content of the soil.

A gradual increase in water content causes the soil to change from solid to semi-solid to plastic to liquid states. The water contents at which the consistency changes from one state to the other are called consistency limits (or Atterberg limits).

The three limits are known as the shrinkage limit (WS), plastic limit (WP), and liquid limit (WL) as shown. The values of these limits can be obtained from laboratory tests. 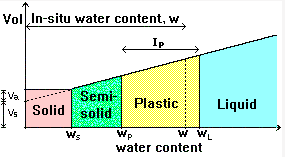 The difference between the liquid limit and the plastic limit is known as the plasticity index (IP), and it is in this range of water content that the soil has a plastic consistency. The consistency of most soils in the field will be plastic or semi-solid.