Histogram
This graphical method is most widely used in practice. Histogram is a series of adjacent vertical bars whose height is equal to the frequencies of the respective classes & width is equal to the class interval. Construction of Histogram – While constructing Histogram the variable taken on X-axis & frequency of Yaxis. (i) Histogram with equal classes – When class intervals are equal, take the frequency on Y-axis and the variable on X-axis and adjacent rectangles are constructed. The height of these rectangles would be exactly equal (or proportional) to the frequency of the given class. (ii) Histogram with unequal classes – If the classes are not uniform, then frequencies have to be adjusted by the adjustment factor. First find the class having the lowest class interval. This is taken as the starting point.

For e.g. the class interval in 70 – 90 its width is 20. If the lowest width in the series is 5, then the adjustment factor is 20/5 = 4 & the corresponding frequency would be divided by 4 to get the required adjusted frequency needed for the graph. If only midpoints are given then upper & lower limits of various classes have to be calculated & then only histogram would be constructed.

Frequency polygon could be drawn by first drawing histogram & then joining all the midpoints of the tops (upper side) of the adjacent rectangle of the histogram by straight line graphs. The figure so obtained is called a frequency polygon. It should be noted that it is necessary to close the polygon at both ends by extending them to the base line so that it meets the X-axis at the mid points of the two hypothetical classes i.e. the class before the first class & the class after the last class having the zero frequency. Frequency polygon could alternatively be drawn without first drawing the histogram.
This could be done by plotting the frequencies of different classes (along Y-axis) against the mid values of corresponding classes (along X axis). These points are joined by straight line to get a frequency polygon. Here also this polygon would be closed at both ends by extending them to meet the X-axis. 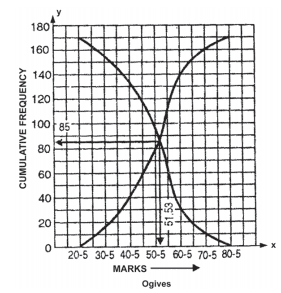 Note. From the above figure, it is noted that the ogives cut at a point whose ordinate is 85, i.e. half the total frequency corresponding and the abscissa is 51.33 which is the median of the above frequency distribution (see the sum on median in the chapter of Average). Even if one ogive is drawn, the median

can be determined by locating the abscissa of the point on the curve, whose cumulative frequency is N/2. Similarly, the abscissa of the points on the less than type corresponding to the cumulative frequencies N/4 and 3N/4 give the Q1 (first quartile) and Q3 (third quartile) respectively, (Q1, Q3 will be discussed after median in the chapter of Average).

Ogive (less than type) of given data : 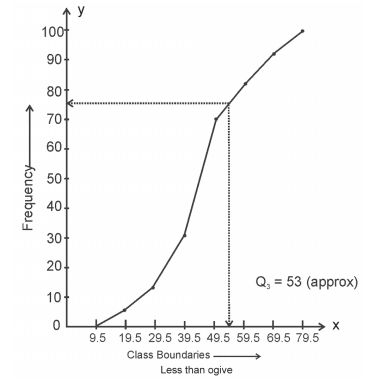 From the above graph we find that Q3 = 53 (approx).
Circular Diagram (or Pie diagram) : It is a pictorial diagram in the form of circles where whole area represents the aggregate and different sectors of the circle, when divided into several parts, represent the different components. For drawing a circular diagram, different components are first expressed as percentage of the whole. Now since 100% of the centre of a circle is 360 degrees. 1% corresponds to 3.6 degrees. If p be the percentage of a certain component to the aggregate, then (p × 3.6) degrees will be the angle, which the corresponding sector subtends at the centre.
Note : A pie diagram is drawn with the help of a compass and a diagonal scale or a protractor. Different sectors of the circle representing different components are to be marked by different shades or signs.
Example 10: The expenditure during Second Five-year Plan in West Bengal is shown as below :

To represent the data by circular diagram. First we express each item as percentage of the aggregate.

Now 1% corresponds to 3.6 degrees. So the angles at the centre of the corresponding sectros are (in degrees) :

Now with the help of compass and protractor (or diagonal scale) the diagram is drawn. 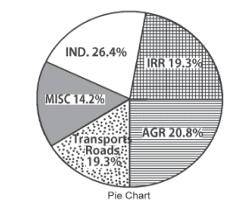