IntroductionGroundwater is the water present below the earth’s surface and is a vast resource of water. Almost 22 percent of water is below the surface land in the form of groundwater. Groundwater is important as it is used for water supply in rural and urban areas. It is also often used for municipal, industrial and agricultural use by building and operating extraction wells.

≫ Groundwater PollutionGenerally, groundwater is good for drinking. Groundwater that is polluted is less visible and difficult to clean up than lakes and rivers. Most often groundwater pollution results from the disposal of wastes improperly including household and industrial chemicals, wastewater from mines, leaking underground oil storage, oil field brine pits, garbage landfills, and sewage systems.Prevention of groundwater pollution can be done by:

≫ What are Porosity and Permeability? 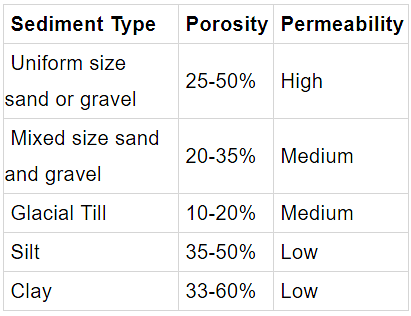 The document Ground Water Notes - UPSC is a part of UPSC category.
All you need of UPSC at this link: UPSC