The basics of set theory : sets, ∩, U, ∈, etc. should be familiar to the reader. Our notation for subsets of a given set A will beB = {a ∈ A I . . . (conditions on a) . . . }.The order or cardinality of a set A will be denoted by IAl. If A is a finite set, the order of A is simply the number of elements of A.It is important to understand how to test whether a particular x ∈ A lies in a subset B of A. The Cartesian product of two sets A and B is the collection A x B = {(a, b) | a ∈ A, b ∈ B}, of ordered pairs of elements from A and B.We shall use the following notation for some common sets of numbers:

B to denote a function f from A to B and the value of f at a is denoted f(a) (i.e., we shall apply all our functions on the left). We use the words function and map interchangeably. The set A is called the domain of f and B is called the codomain of f. The notation f : a → b or a → b if f is understood indicates that f(a) = b, i.e., the function is being specified on elements.The set f(A) = {b ∈ B I b = f(a), for some a ∈ A} is a subset of B, called the range or image of f (or the image of A under f). For each subset C of B the set f-1(C) = {a ∈ A I f(a) ∈ C} consisting of the elements of A mapping into C under f is called the preimage or inverse image of C under f. For each b ∈ B, the preimage of {b} under f is called the fiber of f over b. Note that f-1 is not in general a function and that the fibers of f generally contain many elements since there may be many elements of A mapping to the element b.

A permutation (rearrangement) of a set A is simply a bijection from A to itself.If A ⊆ B and f : B → C, we denote the restriction of f to A by flA. When the domain we are considering is understood we shall occasionally denote flA again simply as f even though these are formally different functions (their domains are different).If A ⊆ B and g : A → C and there is a function f : B C such that flA = g, we shall say f is an extension of g to B (such a map f need not exist nor be unique).

Let A be a nonempty set.

Proposition : Let A be a nonempty set.

Properties of The Integers

where rn is the last nonzero remainder. Such an rn exists since |b| > |r0| > |r1| > ... > Irnl is a decreasing sequence of strictly positive integers if the remainders are nonzero and such a sequence cannot continue indefinitely. Then rn is the g.c.d. (a, b) of a and b.

A group is an ordered pair (G, *) where G is a set and * is a binary operation on G satisfying the following axioms:

Example : The set of integers Z (so denoted because the German word for numbers is Zahlen), the set of rational numbers 𝕢 (for quotient), and the set of real numbers 𝕣 are all groups under ordinary addition. In each case, the identity is 0 and the inverse of a is -a.

Example : The set of integers under ordinary multiplication is not a group. Since the number 1 is the identity, property 3 fails. For example, there is no integer b such that 5b = 1.

Example : The subset {1,-1, i, -i} of the complex numbers is a group under complex multiplication. Note that -1 is its own inverse, whereas the inverse of i is -i, and vice versa.

Example : The set 𝕢+ of positive rationals is a group under ordinary multiplication. The inverse of any a is 1/a 5 a-1.

Example : A rectangular array of the form

is called 2 x 2 matrix. The set o f all 2 x 2 matrices with real entries is a group under component wise addition. That is,

and the inverse of

Example : The set 𝕫n = {0, 1, ..., n - 1} for n > 1 is a group under addition modulo n. For any j > 0 in 𝕫n, the inverse of j is n - j.This group is usually referred to as the group of integers modulo n.As we have seen, the real numbers, the 2 x 2 matrices with real entries, and the integers modulo n are all groups under the appropriate addition. 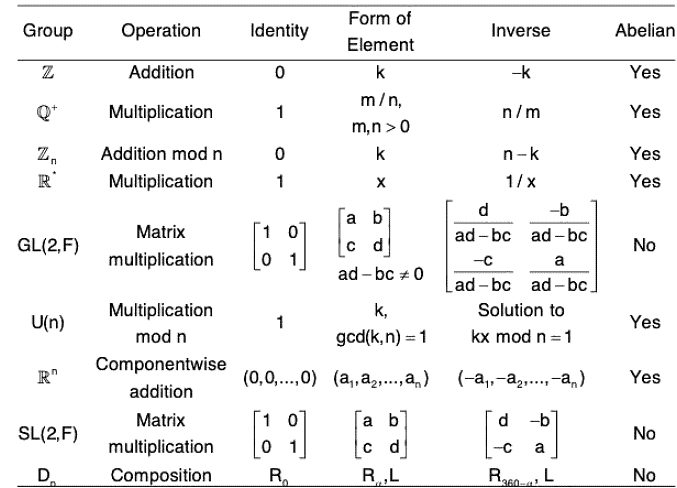 The first formula tells us that the inverse of a product is the product of the inverses in reverse order. The next formula tells us that a is the inverse of the inverse of a. The proof of (i) is as follows:(ab)(b-1a-1) = a[(bb-1)a-1] by the associative law= a[ea-1] because bb-1 = e  = aa-1= eSince the product of ab and b ’ a 1 is equal to e, it follows by Theorem 2 that they are each other’s inverses. Thus, (ab)-1 = b-1a-1. The proof of (ii) is analogous but simpler: aa-1 = e, so by Theorem 2 a is the inverse of a-1, that is, a= (a-1)-1.The associative law states that the two products a(bc) and (ab)c are equal; for this reason, no confusion can result if we denote either of these products by writing abc (without any parentheses), and call abc the product of these three elements in this order.We may next define the product of any four elements a, b, c, and d in G by abed = a(bcd)By successive uses of the associative law we find that a(bc)d = ab(cd) = (ab)(cd) = (ab)cdHence the product abed (without parentheses, but without changing the order of its factors) is defined without ambiguity.In general, any two products, each involving the same factors in the same order, are equal. The net effect of the associative law is that parentheses are redundant.Having made this observation, we may feel free to use products of several factors, such as a1a2 ... an, without parentheses, whenever it is convenient. Incidentally, by using the identity (ab)-1 = b-1a-1 repeatedly, we find that

If G is a finite group, the number of elements in G is called the order of G. It is customary to denote the order of G by the symbol |G|.

The group G is said to be abelian if a • b = b • a for all a, b ∈ G.An abelian group is a nonempty set A with a binary operation + defined on A such that the following conditions hold:

EXAMPLE OF SEMI-GROUP BUT NOT MONOID : Nonzero real numbers under the operation * defined by a*b = |a|b.

EXAMPLE OF MONOID BUT NOT GROUP : {0,1} under multiplication.

In mathematics, a nonabelian group, also sometimes called a noncommutative group, is a group (G, *) in which there are at least two elements a and b of G such that a * b ≠ b * a. The term nonabelian is used to distinguish from the idea of an abelian group, where all of the elements of the group commute.

is a finite abelian group for multiplication of complex numbers.

On observing the table, it is clear that :

Since the associativity and commutativity of the multiplication of numbers is obvious, so G is a finite (of order 4) abelian group for multiplication.

Example : Prove that the set of n, nth roots of unity is a multiplicative finite abelian group. 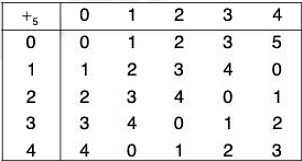 From the table it is observed that

Let G = {f1, f2, f3, f4, f5, f6} and o denote composite of functions. Now calculating all the possible products under this operation, we have the following: 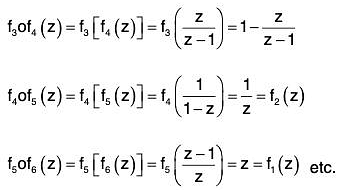 From these we obtain the following composition table of (G, o) : 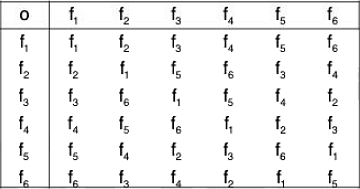 The group axioms can be easily verified from the above composition table. There fore (G, o) is a finite group.More over since the table is not symmetrical about the leading diagonal so it is a non commutative finite group.

Example : Show that the set Q+ of the positive relational numbers forms an abelian group for the operation * defined as :a * b = ab/2

is a commutative group under matrix multiplication.

is the identity element because

Example : Show that the set of all the matrices of the form

is an abelian group for matrix multiplication.

Theorem : (Uniqueness of inverse)The inverse of an element in a group is unique.

Remark. The inverse of the identity of a group is itself.

By principle of induction, the above theorem can be generalised as :(a1a2a3...an)-1 =

Theorem : Alternate definition of a group :If for all elements a, b of a semigroup G, equations ax = b and ya = b have unique solutions in G, then G is a group.

Remark. If G is a semi group such that for a, b in G, only the equation ax = b (or ya = b) has a unique solution in G, then G may not be a group.This can be observed by the following example :

Remark : If G is an infinite semi group satisfying cancellation law but it is not a group.

Example : The positive integers under multiplication form a cancellative semigroup, but is not a group.

Caution : It should be noted that a semi group G may be such that G contains a left identity e and each element a in G has a right inverse related to e. In such a case G may fail to be a group. This will be clear by the following example :

Finite and Infinite groupA group (G, *) is said to be finite if its underlying set G is a finite set and a group which is not finite is called an infinite group.

Order of a GroupThe number of elements of a group (finite or infinite) is called its order. We will use IGI to denote the order of G.Thus, the group Z of integers under addition has infinite order, whereas the group U(10) ={1, 3, 7, 9} under multiplication modulo 10 has order 4.

Integral powers of an element in a group

Order of an ElementThe order of an element g in a group G is the smallest positive integer n such that gn = e. (In additive notation, this would be ng = 0). If no such integer exists, we say g has infinite order. The order of an element g is denoted by Igl.So, to find the order of a group element g, we need only compute the sequence of products g, g2, g3,..., until you reach the identity for the first time. The exponent of this product (or coefficient if the operation is addition) is the order of g. If the identity never appears in the sequence, then g has infinite order.

Remark. From the above definition, it is clear that for any element a of a group if an = e then 0(a) ≤ n.

Example : In Klein’s 4 group every element except identity is of order 2.

For the second part, let

Example : If for every element a of a group G, a2 = e; then prove that G is abelian.

Remark. For any element a of a group G, if a2 = a, then a is called an idempotent.

Example : If a, b are elements of an abelian group G, then prove that :(ab)n = anbn,

Example : Prove that every group of order 4 is an abelian group.

Similarly it can be seen thatac = ca and be = cbHence G is an abelian group.