The chapter of HCF & LCM is part of Number Systems unit which is amongst the most important chapters in the entire syllabus of Quantitative Aptitude for the CAT examination (and also for other parallel MBA entrance exams). Students are advised to go through this chapter with utmost care understanding each concept and question type on this topic. The CAT has consistently contained anything between 20-40% of the marks based on questions taken from this chapter.

Naturally, this chapter becomes one of the most crucial as far as your quest to reach close to the qualification score in the section of Quantitative Aptitude and Data Interpretation is concerned.

If number a divided another number b exactly, we say that a is a factor of b. In this case, b is called a multiple of a.

There are two methods of finding the H.C.F. of a given set of numbers:

» Stepwise Explanation of Solving the Problem

» Stepwise Explanation of Solving the Problem

➤Shortcut Method for Finding the HCF

The CAT exam is all about saving time, hence we suggest you keenly observe & practice the examples on these short tricks to solve the problems, as they save your time in the final exam.

► One of these 8 numbers has to be the HCF of the 6 numbers. 54 cannot be the HCF because the numbers 423 and 2223 being odd numbers would not be divisible by any even number. Thus, we do not need to check any even numbers in the list.

Question 1:A nursery has 363,429 and 693 plants respectively of 3 distinct varieties. It is desired to place these plants in straight rows of plants of 1 variety only so that the number of rows required is the minimum. What is the size of each row and how many rows would be required? (Try to solve using the shortcut method)?
Explanation 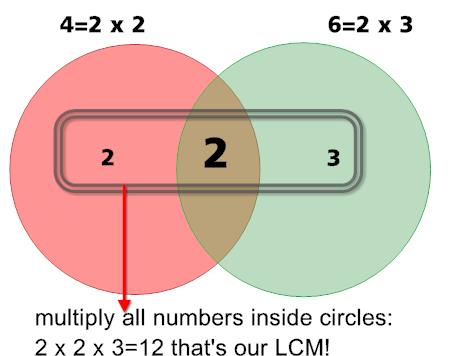 There are two methods of finding the L.C.M. of a given set of numbers:

Resolve each one of the given numbers into a product of prime factors. Then, L.C.M. is the product of the highest powers of all the factors.

Question 2:The LCM of two numbers is 936. If their HCF is 4 and one of the numbers is 72, the other is:
Explanation

Question 3:Find Greatest Number, which will divide 215,167 and 135 so as to leave the same remainder in each case
Explanation

Co-primes: Two numbers are said to be co-primes if their H.C.F. is 1.

H.C.F. and L.C.M. of Decimal Fractions

In given numbers, make the same number of decimal places by annexing zeros in some numbers, if necessary. Considering these numbers without a decimal point, find H.C.F. or L.C.M. as the case may be. Now, in the result, mark off as many decimal places as are there in each of the given numbers.

Question 4:What Will Be The Least Possible Number Of The Planks, if three pieces of timber 42 m, 49 m, and 63 m long have to be divided into planks of the same length?
Explanation

In the next Document you will be practising CAT level & previous CAT, XAT problems to improve your understanding in the concept of HCF & LCM.