145) Describe the history of the Socialist Movement in Russia.Ans: In 1898, the Russian Social Democratic Workers Party was formed on the lines of Karl Marx. Some socialists formed the Socialists Revolutionary Party in 1900, to struggle for peasants rights and demanded that land belonging to nobles be transferred to peasants. Lenin felt that these were peasants who were poor as well as rich, so they could not all be a part of the socialist movement. Lenin, who formed the Bolshevik group felt that in a society like Tsarist Russia, party should be disciplined and should control its members number and quality, whereas Mensheviks thought that the party should be open to all. The party was divided over the strategy of organisation, Bolsheviks and Mensheviks. Bolsheviks were led by Lenin and Mensheviks by Kerensky.

146) Describe the condition of Russia during World War I.Ans: In Russia, the war was initially popular and people agreed to Tsar Nicholas' policies. The First World War on the eastern front differed from western front. In the west, armies fought from trenches along eastern France. In the east, armies fought battles with large casualties. Defeats were shocking and demoralising. As German armies further moved, the Russian army destroyed crops and buildings to prevent the enemy to enter easily. Destruction of crops and buildings led to over three million refugees in Russia. The situation discredited the government of the Tsar. Even soldiers did not like to fight such a war.

147) State the main events leading to the February Revolution in Petrograd.Ans: All the workers' quarters and factories were located on the right bank of the river Neva. On the left bank were the fashionable areas, the Winter Palace, official buildings and the palace where Duma met. In February 1917, there was severe food shortage in workers' quarters. On 22 February, a lockout took place at a factory leading to a strike by the workers. In other factories also, workers went on strikes and women led the way to the strikes. This came to be called, 'The International Women's Day'. The workers ultimately crossed the river and surrounded the official buildings in protest. The government imposed a curfew and called out the cavalry and police to keep a check on them.

148) How was the February Revolution able to bring down the monarchy in Russia?Ans: On Sunday the 25 February, the government suspended the Duma. Demonstrations returned back on the streets of the left bank. People raised slogans about bread, wages, better hours and democracy. The government tried to control the situation by calling the army but the cavalry refused to fire at the  demonstrators. Now soldiers also joined workers and had all gathered to form a Council called the 'Soviet'. This was the Petrograd Soviet. The very next day, a delegation went to see the Tsar and advised him to accept defeat. He decided to abdicate on 2 March and the Soviet leaders and the Duma leaders formed a Provisional Government. New Russia's future would be decided by the Constituent Assembly, elected on the  basis of universal adult franchise. Petrograd had led the February Revolution that brought down the monarchy in February 1917.

149) Which events led to the October Revolution of 1917 in Russia?Ans: (i) A conflict grew between the Provisional Government and the Bolsheviks as Lenin feared that the Provisional Government may set up a dictatorship.(ii) On 16 October 1917, Lenin persuaded them to accept socialists' power and appointed a Military Revolutionary Committee under Leon Trotskii to organise the seizure.(iii) The uprising began on 24 October and Kerenskii, the Prime Minister left the city to call troops.(iv) In a swift response, the Military Revolutionary Committee ordered its supporters to seize government offices and arrest ministers.(v) By nightfall, the city was under the Committee's control and the ministers had surrendered.(vi) Uprisings took place in other cities. There was heavy fighting but by December, the Bolsheviks controlled the Moscow-Petrograd area. 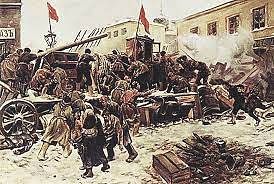 150) What changes were brought about by the Bolsheviks immediately after the October Revolution?Ans: (i) Bolsheviks were totally opposed to private property.(ii) Most industry and banks were nationalised in November 1917. This meant that the government took over ownership and management.(iii) Land was declared a social property and peasants were allowed to seize the land of the nobility.(iv) In cities, they enforced the partition of large houses according to family requirements.(v) They banned the use of the old titles of aristocracy.(vi) The Bolshevik Party was renamed the Russian Communist Party.

151) What do you know about Stalin's Collectivisation Programme?Ans: From 1929, the party forced all peasants to cultivate in collective farms. The bulk of land and implements were transferred to the ownership of collective farms. Peasants worked on the land and the profit was shared. Enraged peasants resisted the authorities and destroyed their livestock. Those who resisted the collectivisation were severely punished. Many were deported and exiled. As they resisted collectivisation, peasants argued that they were not rich and they were not against socialism. Stalin's government allowed some independent cultivation but treated such cultivators unsympathetically.

152) What were the views of liberals about the transformation of society in the 18th century?Ans: Views of liberals: (i) Liberals wanted a nation which tolerated all religions.(ii) They also opposed the uncontrolled power of dynastic rulers.(iii) They wanted to safeguard the rights of individuals against governments.(iv) They argued for a representative, elected parliamentary government, subject to laws interpreted by a well-trained judiciary that was independent of rulers and officials.(v) However, they did not believe in universal adult franchise. They felt men who own property mainly should have the vote. They also did not want the vote for women.

153) What were the effects of the Russian Revolution on the world? Ans: (i) In many countries, communist parties were formed?like the Communist Party of Great Britain.(ii) The Bolsheviks encouraged colonial people to fight for their independence.(iii) Many Non-Russians from outside the USSR participated in the conferences held by socialists and the Bolshevik-founded Comintern (a Communists International).(iv) Some received education in the USSR's Communist University of the Workers of the East.(v) With the outbreak of World War II, the USSR had given socialism a global face and world stature.    EUROPE IN 1914

156) The Central Powers of World War I were: (a) France, Britain and Russia (b) Russia, Italy and Romania (c) Germany, Austria and Turkey (d) Italy, France and BritainAns: C

157) The Jadidists were those who: (a) Followed Judaism (b) Formed a socialist party (c) Were Muslim reformers in Russia (d) were social democratsAns: C

159) Why the period after the success of French Revolution can be called the age of social change?Ans: (i) The French Revolution opened up the possibility of creating a dramatic change in the way in which society was structured.    (ii) Before the 18th century society was broadly divided into estates  and orders and it was the aristocracy and church which controlled  economic and social power.(iii) Suddenly, after the revolution, it seemed possible to change this. In many parts of the world including Europe and Asia, new ideas  about individual rights and who controlled social power began to  be discussed.(iv) In India, Raja Rammohan Roy and Derozio talked of the significance of the French Revolution and many others debated the ideas of post-revolutionary Europe.(v) The developments in the colonies, in turn, reshaped these ideas of societal change.

160) What was the impact of industrial society on the social life of the people?Ans: (i) Industrialisation brought men, women and children to factories.(ii) Work hours were often long and wages were poor.(iii) Unemployment was common, particularly during times of low demand for industrial goods.(iv) Housing and sanitation were problems since towns were growing  rapidly.(v) Liberals and radicals searched for solutions to these issues.

161) "World War I left Russia in such a situation that it led to February revolution in Petrograd." Do you agree?Ans: (i) In World War I, Russian defeats were shocking and demoralising, Russia's army lost badly in Germany and Austria between 1914 and 1916.              (ii) As they retreated, the Russian army destroyed crops and  buildings to prevent the enemy from being able to live off  the land. The destruction of crops and buildings led to over 3 million refugees in Russia.                                  (iii) The war had a severe impact on industry. Russia's own industries were few in number and the country was cut off from other  suppliers of industrial goods by German control of the Baltic Sea.(iv) Industrial equipment disintegrated more rapidly in Russia than elsewhere in Europe. By 1916, railway lines began to break down.(v) Able-bodied men were called up to the war. As a result, there was labour shortage and small workshops producing essentials were shut down.(vi) Large supplies of grain were sent to fed the army. For the people in the cities, bread and flour became scarce. By the winter of 1916, riots at bread shops were common.(vii) In the winter of 1917, conditions in the capital, Petrograd, were grim. In February 1917, food shortages were deeply felt in the workers quarters, leading to lockouts and about fifty factories called a strike.

162) What was the global influence of Russian Revolution? Ans: (i) In many countries, communist parties were formed like the  Communist Party of Great Britain.                (ii) The Bolsheviks encouraged colonial people to follow their experiment of taking power.(iii) Many non-Russians from outside the USSR participated in the Conference of the People of East and the Bolshevik-founded Comintern (an international union of pro-Bolshevik socialist parties).(iv) Some received education in USSR's Communist University of the Workers of the East.(v) By the time of the outbreak of the Second World War, the USSR had given socialism a global face and world stature.