8.2.4 Why multi-pass exchangers?The simplest type of heat exchangers is double pipe heat exchangers, which is inadequate for flow rates that cannot readily be handled in a few tubes. If several double pipes are used in parallel, the metal weight required for the outer tubes becomes so large that the shell and tube construction, such as 1-1 exchanger will be helpful. In that one shell serves for many tubes, is economical. The heat transfer coefficient of tube side and shell side fluid is very important and the individual heat transfer coefficients must be high enough to attain high overall heat transfer coefficient. As the shell would be quite large as compared to the tubes, the velocity and the turbulence of the shell side fluid is important.

It should be noted that generally even number of tube passes are used in multi pass exchanger.

It is to be noted that the following assumption have been considered for developing LMTD,

FT, the LMTD correction factor can be directly obtained from available charts in the literature. These charts were prepared from the results obtained theoretically by solving the temperature distribution in multi-pass heat exchangers.

Figures 8.12 and 8.13 show the two generally used heat exchangers and their corresponding plots for finding FT. It may be noted that the given figures have the representative plots and any standard book on heat transfer may be consulted for the accurate results. 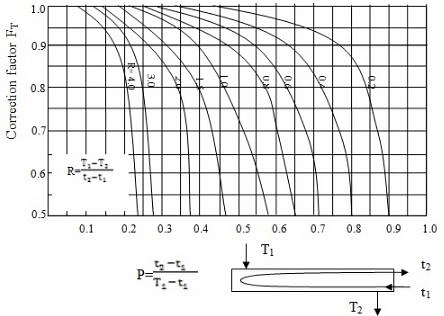 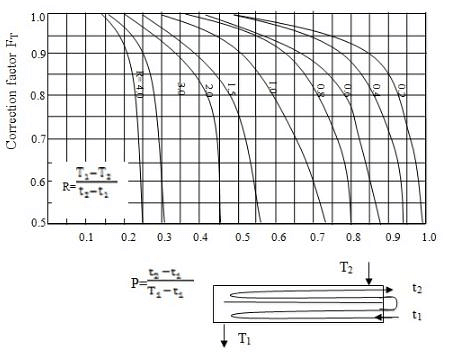 It should be noted that in case of condensation or evaporation the correction factor becomes unity (FT =1). While designing a heat exchanger, the rule of thumb is that the FT should not be less than 0.8.

The heat transfer coefficient (hi) for the tube side fluid in a heat exchanger can be calculated either by Sieder-Tate equation or by Colburn equation discussed in earlier chapter.

However, the shell side heat transfer coefficient (ho) cannot be so easily calculated because of the parallel, counter as well as cross flow patterns of the fluid. Moreover, the fluid mass velocity as well as cross sectional area of the fluid streams vary as the fluid crosses the tube bundle. The leakages between baffles and shell, baffle and tubes, short circuit some of the shell fluid thus reduces the effectiveness of the exchanger.

The Dh and Gs can be easily calculated if the geometry of the tube arrangement in the shell is known. The tubes may be generally arranged as a square or triangular pitch, as shown in figure 8.14.

Fig.8.14: Tube arrangement in the shell (a) triangular pitch (b) square pitch

The hydraulic diameter (Dh) for tubes on square pitch

as = shell side flow area

Shell side flow area can be calculated using baffle information number of tubes in the shell and tube arrangement. If 25% cut baffles are used, that means the shell side flow will be from this 25% area. However we have to reduce the area of the pipes which are accumulated in this opening. So depending upon the information we may determine the shell side fluid flow area. It may also be found out by the following way,