Churchill and Chu provided the correlation for average heat transfer coefficient for natural convection for different ranges of Rayleigh number.

It should be noted that the eq. 5.7 and 5.8 are also applicable for an inclined surface upto less than inclination from the vertical plane.

where,  is the diameter and  is the height of the cylinder.

5.2.2 Natural convection around a horizontal cylinder

Churchill and Chu has provided the following expression for natural-convective heat transfer.

Condition of applicability of the eq.5.10:

In the previous case of vertical flat surface, the principal body dimension was in-line with the gravity (i.e. vertical). Therefore, the flow produced by the free convection was parallel to the surface regardless of whether the surface was hotter or cooler compared to the bulk fluid around. However, in case of horizontal flat plate the flow pattern will be different and shown in fig. 5.3.

where, Lc is characteristic length defined as below.

It is another class of problems for which there are many cases and their corresponding correlations are also available in the literature. Here two cases will be discussed, (i) in which a fluid is contained between two vertical plates separated by a distance d, (ii) the other where the fluid is in an annulus formed by two concentric horizontal cylinders.

The corresponding Grashof number will be

McGregor and Emery proposed the following correction for free convection heat transfer in a vertical rectangular enclosure, where the vertical walls are heated or cooled and the horizontal surfaces many be assumed adiabatic,

Applicability conditions for the above equation are,

Here L/d is known as the aspect ratio. 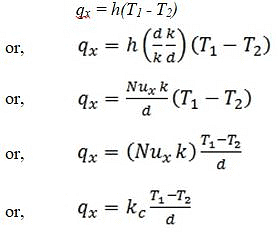 where, kc(= Nuxk) is known as the apparent thermal conductivity.

In the second case the heat transfer is involved in the enclosure formed by two concentric cylinders in horizontal position, the correlation given by Raithby and Holland,

is the modified Rayleigh number given by,

where, di and d0 are the outer and inner diameter of the inner and outer cylinders, respectively. The enclosure characteristic length l is defined as (d0 - di).

It should be noted that the rate of heat flow by natural convection per unit length is same as that through the annular cylindrical region having effective thermal conductivity ke for the case,

where, T1 and T2 are the temperatures of the inner and outer cylindrical walls, respectively.