Heat transfer in boiling and condensation

In the previous chapter we have discussed about the convective heat transfer in which the homogeneous single phase system was considered. The heat transfer processes associated with the change of fluid phase have great importance in chemical process industries. In this chapter, we will focus our attention towards the phase change from liquid to vapour and vice-versa.

The conversion of a liquid into a vapour is one of the important and obvious phenomena. It has been found that if water (say) is totally distilled and degassed so that it does not have any impurity or dissolved gases, it will undergo liquid to vapour phase change without the appearance of bubbles, when it is heated in a clean and smooth container. However, in normal situation, as can be understood, the presence of impurities, dissolved gases, and surface irregularities causes the appearance of vapour bubble on the heating surface, when the rate of heat input is significantly high.

The other form of the boiling is known as forced convective boiling in which the boiling occurs simultaneously with fluid motion induced by externally imposed pressure difference. In this chapter, we will mostly consider the pool boiling.

As generally the bubbles are formed during boiling, we will first refresh the following basic information. Consider a spherical bubble of radius  in a liquid as shown in fig. 6.1 Fig. 6.1: Force balance on a submerge spherical bubble in a liquid

The pressure of vaporisation inside the bubble, Pvap, must exceed that in the surrounding liquid, Pliq, because of the surface tension (σ) acting on the liquid-vapour interface.

The force balance on the equatorial plane

The eq. 6.1 shows that to create a bubble of small radius, it would be necessary to develop very large pressure in the vapour. In other word, a high degree super heat is necessary for the generation of a tiny bubble (or nucleus) in the bulk liquid. This is the reason, the bubble are usually formed at bits existing in the surface irregularities, where a bubble of finite initial radius may form, or where gasses dissolved in the system of the liquid come out of the solution.

Figure 6.2 shows a typical representative pool boiling curves for water contained in a container where the water is heated by an immersed horizontal wire. Consider we are measuring the heat flux (thus, h) and the temperature difference (ΔT) between the boiling water (Tsat) and the wall temperature of the heater wire (Tw). The temperature of the heater wire is gradually raised while measuring the heat flux between heated surface and boiling water until a large value of ΔT reaches. The corresponding plot is prepared at the log-log scale. The plot shows six different sections in the boiling curve shown in the fig.6.2. 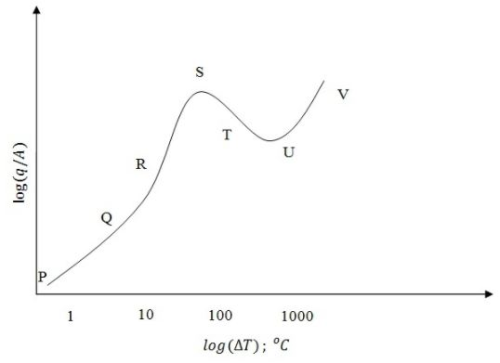 The different regimes of the boiling plot (fig. 6.2) have different mechanism. We will see those mechanisms in-brief in the following section.