When two systems with different temperatures are put in contact, heat flows spontaneously from the hotter to the colder system. There are different parameter which is helpful to determine Heat exchange of system mainly comprises Fluid and Gas.Specific Heat

Molar heat capacity is defined as the energy required to raise the temperature of one mole of Ideal gas by one Kelvin at constant volume.U =

, where NA is Avogadro number

Latent HeatThe heat required to convert a solid into a liquid or vapor, or a liquid into a vapor, without change of temperature. Latent heat can be understood as heat energy in hidden form which is supplied or extracted to change the state of a substance without changing its temperature. Examples are latent heat of fusion and latent heat of vaporization involved in phase changes, i.e. a substance condensing or vaporizing at a specified temperature and pressure.

completely effect a phase change of a unit of mass (m) , usually 1kg , of a substance as

an intensive property, then

Suppose due to heat supplied Q to a system, the system expands and applies pressure P on piston of area A while is displaced by dx

Total work W = ∫PAdx or W = ∫PdV where Adx = dV volume swept by piston.Work done when process is occurred between A to B is the area under the PV curve i.e. 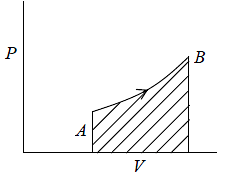 valid for a reversible pressure only as integration can be done only for a continuous path. Otherwise W = PΔV irreversible process.Sign convention:

Example 4: The equation of state for one mole of a non-ideal gas is given by

, where the coefficient A and B are temperature dependent. If the volume changes from V1 to V2 in an isothermal process, find the work done by the gas.

Example 5: The pressure P of a fluid is related to its number density ρ by the equation of state P = aρ + bρ2 where a and b are constants. If the initial volume of the fluid is V0 , Find the work done on the system when it is compressed, so as to increase the number density from an initial value of ρ0 to2ρ0.

The Ratio of the change in pressure acting on volume to the fractional change in volume. Isothermal Elasticity can be compare to Bulk modulus of Ideal gases

The inverse of Isothermal Elasticity is identified as Isothermal compressibility

The inverse of Adiabatic elasticity is identified is Adiabatic compressibilityβs =

Example 6: Find the isothermal compressibility βT of a van der Waals gas which is given by equation of state

as a function of volume V at temperature T .Note: By definition, βT =

We know bulk modulus of a gas is given by

If process is isothermal: T = constant

Conservation of energy base of first law of thermodynamics

Energy can neither be created nor destroyed; rather, it can only be transformed or transferred from one form to another.

Case -1 -when boundary of system is rigid

When system is rigid volume cannot be changed, when heat energy Q is supplied to a

system, the activity of its constituent particles increases because of this energy.

, Ui is internal energy of ith system particles. The level of activity is measured in terms of temperature. If body is cooled, the reverse of this happens. In nutshell we can say that Q has been converted into U or vice versa. So energy is conserved.

In this case heat is converting into internal energy and vice versa .

Suppose heat supplied Q into a system, then pressure developed on such that boundary

of system expands by volume dV then mechanical work done is given by W = ∫PdV. The heat exchanged Q is equal to work done W similarly if boundary of system contracted then work done on the system and Heat will flow out of system. In this case heat is converting into mechanical energy and vice versa.

Case 3: When boundary not rigid but made of insulator.

temperature of gas increase so internal will increased energy