The document Hermite and Laguerre Special Functions (Part - 1)- Mathematical Methods of Physics, UGC -NET Physics Physics Notes | EduRev is a part of the Physics Course Physics for IIT JAM, UGC - NET, CSIR NET.
All you need of Physics at this link: Physics 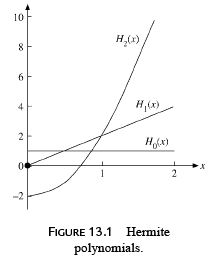 Equation (13.2) is obtained by differentiating the generating function with respect to t :

which can be rewritten as

Because each coefﬁcient of this power series vanishes, Eq. (13.2) is established. Similarly, differentiation with respect to x leads to

The Maclaurin expansion of the generating function

gives H0 (x ) = 1 and H1 (x ) = 2x , and then the recursion Eq. (13.2) permits the construction of any Hn (x ) desired (integral n). For convenient reference the ﬁrst several Hermite polynomials are listed in Table 13.1.Special values of the Hermite polynomials follow from the generating function forx = 0:

We also obtain from the generating function the important parity relation

The Rodrigues representation of Hn (x ) is

Let us show this using mathematical induction as follows.

We rewrite the generating function as

More directly, differentiation of the generating function n times with respect to t and then setting t equal to zero yields

A second representation may be obtained by using the calculus of residues (Section 7.1).If we multiply Eq. (13.1) by t −m−1 and integrate around the origin in the complex t -plane, only the term with Hm (x ) will survive:

where [N/2] is the largest integer less than or equal to N/2. Writing the binomial coefﬁcient in terms of factorials and using Eq. (13.1) we obtain

This series terminates for integral n and yields our Hermite polynomial.

which was used already in Example 13.1.1. If we differentiate this recursion relation and substitute Eq. (13.3) for the index n + 1 we ﬁnd

which is clearly not self-adjoint.To put the ODE in self-adjoint form, following Section 10.1, we multiply by exp (−x 2 ),

Exercise 10.1.2. This leads to the orthogonality integral

with ϕn (x) no longer a polynomial.

Substitution into Eq. (13.10) yields the differential equation for ϕn (x),

This is the differential equation for a quantum mechanical, simple harmonic oscillator, which is perhaps the most important physics application of the Hermite polynomials.

Equation (13.13) is self-adjoint, and the solutions ϕn (x ) are orthogonal for the interval (−∞ <x < ∞) with a unit weighting function.The problem of normalizing these functions remains. Proceeding as in Section 12.3, we multiply Eq. (13.1) by itself and then by e−x 2 . This yields

When we integrate this relation over x from −∞ to +∞, the cross terms of the double sum drop out because of the orthogonality property:3

The following development of Hermite polynomials via simple harmonic oscillator wave functions φn (x ) is analogous to the use of the raising and lowering operators for angular momentum operators presented in Section 4.3. This means that we derive the eigenvalues n + 1/2 and eigenfunctions (the Hn (x )) without assuming the development that led to Eq. (13.13). The key aspect of the eigenvalue Eq. (13.13),

i of quantum mechanics (with momentum px =

a constant, and then verify Eq. (13.16) directly by expanding the product of operators.The product form of Eq. (13.16), up to the constant commutator, suggests introducing the non-Hermitian operators

which are adjoints of each other. They obey the commutation relations

which are characteristic of these operators and straightforward to derive from Eq. (13.18) and

we see that N has nonnegative igenvalues

We now show that if

is nonzero it is an eigenfunction with eigenvalue λn−1 = λn − 1. After normalizing

which follow from Eq. (13.20). These commutation relations characterize N as the number operator. To see this, we determine the eigenvalue of N for the states

repeatedly, we can reach the lowest, or ground, state |0} with eigenvalue λ0 .We cannot step lower because λ0 ≥ 1/2. Therefore

where c0 is an integration constant. The solution,

Thus, the excited-state wave functions, ψ1 ,ψ2 , and so on, are generated by the raising operator

As shown, the Hermite polynomials are used in analyzing the quantum mechanical sim

Our oscillating particle has mass m and total energy E . By use of the abbreviations

Alternatively, the requirement that n be an integer is dictated by the boundary conditions of the quantum mechanical system, 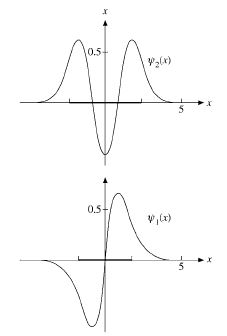 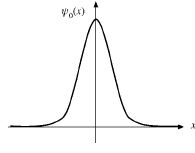 FIGURE 13.2 Quantum mechanical oscillator wave functions: The heavy bar on the x -axis indicates the allowed range of the classical oscillator with the same total energy.

As n ranges over integral values (n ≥ 0), we see that the energy is quantized and that there is a minimum or zero point energy

This zero point energy is an aspect of the uncertainty principle, a genuine quantum phenomenon.

In quantum mechanical problems, particularly in molecular spectroscopy, a number of integrals of the form

are needed. Examples for r = 1 and r = 2 (with n = m) are included in the exercises at the end of this section. A large number of other examples are contained in Wilson, Decius, and Cross.

In the dynamics and spectroscopy of molecules in the Born–Oppenheimer approximation, the motion of a molecule is separated into electronic, vibrational and rotational motion. Each vibrating atom contributes to a matrix element two Hermite polynomials, its initial state and another one to its ﬁnal state. Thus, integrals of products of Hermite polynomials are needed.

where Ni ≥ 0 are integers. The formula (due to E. C. Titchmarsh, J. Lond. Math. Soc. 23: 15 (1948), see Gradshteyn and Ryzhik, p. 838, in the Additional Readings) generalizes the m = 2 case needed for the orthogonality and normalization of Hermite polynomials. To derive it, we start with the product of three generating functions of Hermite polynomials, multiply by e−x 2 , and integrate over x in order to generate I3 :

The powers of the foregoing tj tk become

The ni are all ﬁxed (making this case special and easy) because the Ni are ﬁxed, and

an integer by parity. Hence, upon comparing the foregoing like t1 t2 t3 powers,

In an alternative approach, we now start again from the generating function identity

For ν = 0 the coefﬁcient of HN1 + N2 is obviously unity. Special cases, such as

can be derived from Table 13.1 and agree with the general twofold product formula. This compact formula can be generalized to products of m Hermite polynomials, and this in turn yields a new closed form result for the integral Im .

Let us begin with a new result for I4 containing a product of four Hermite polynomials. Inserting the Feldheim identity for HN1 HN2 and HN3 HN4 and using orthogonality

for the remaining product of two Hermite polynomials yields

Now we return to the product expansion of m Hermite polynomials and the corresponding new result from it for Im . We prove a generalized Feldheim identity,

by mathematical induction. Multiplying this by HNm+1 and using the Feldheim identity, we end up with the same formula for m + 1 Hermite polynomials, including the recursion relation

The limits of the summation indices are

The limits of the summation indices are

Example : APPLICATIONS OF THE PRODUCT FORMULAS

Next let us consider m = 4, where we do not order the Hermite indices Ni as yet. The reason is that the general Im expression was derived with a different grouping of the

In the last expression we have substituted ν3 and used

with a different exponential weight function. To evaluate such integrals we use the generalized Feldheim identity for HN2 ··· HNm in conjunction with the integral (see Gradshteyn and Ryzhik, p. 845, in the Additional Readings),

instead of the standard orthogonality integral for the remaining product of two Hermite polynomials. Here the hypergeometric function is the ﬁnite sum

This yields a result similar to The oscillator potential has also been employed extensively in calculations of nuclear structure (nuclear shell model) quark models of hadrons and the nuclear force.There is a second independent solution of Eq. (13.13). This Hermite function of the second kind is an inﬁnite series (Sections 9.5 and 9.6) and is of no physical interest, at least not yet.

(a) Expand x 2r in a series of even-order Hermite polynomials.

(b) Expand x 2r +1 in a series of odd-order Hermite polynomials.

Hint. Use a Rodrigues representation and integrate by parts.

in terms of n and m and appropriate Kronecker delta functions.

(a) Using the Cauchy integral formula, develop an integral representation of Hn (x ) based on Eq. (13.1) with the contour enclosing the point z =−x .