The document Hermite and Laguerre Special Functions (Part - 2)- Mathematical Methods of Physics, UGC -NET Physics Physics Notes | EduRev is a part of the Physics Course Physics for IIT JAM, UGC - NET, CSIR NET.
All you need of Physics at this link: Physics

If we start with the appropriate generating function, it is possible to develop the Laguerre polynomials in analogy with the Hermite polynomials. Alternatively, a series solution may be developed by the methods of Section 9.5. Instead, to illustrate a different technique, let us start with Laguerre’s ODE and obtain a solution in the form of a contour integral, as we did with the integral representation for the modiﬁed Bessel function Kν (x ) .

From this integral representation a generating function will be derived.

We shall attempt to represent y , or rather yn , since y will depend on the parameter n, a nonnegative integer, by the contour integral

and demonstrate that it satisﬁes Laguerre’s ODE. The contour includes the origin but does not enclose the point z = 1. By differentiating the exponential in Eq. (13.53a) we obtain

which is equal to

If we integrate our perfect differential around a closed contour (Fig. 13.3), the integral will vanish, thus verifying that yn (x ) (Eq. (13.53a)) is a solution of Laguerre’s equation.It has become customary to deﬁne Ln (x ), the Laguerre polynomial (Fig. 13.4), by5 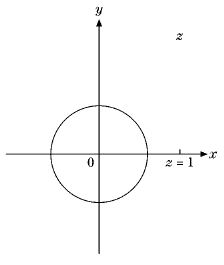 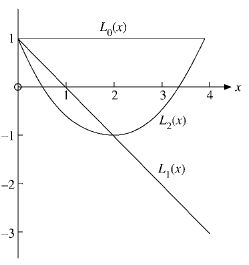 This is exactly what we would obtain from the series

if we multiplied g(x , z) by z−n−1 and integrated around the origin. As in the development of the calculus of residues (Section 7.1), only the z−1 term in the series survives. On this basis we identify g(x , z) as the generating function for the Laguerre polynomials.

the new contour enclosing the point s = x in the s -plane. By Cauchy’s integral formula (for derivatives),

giving Rodrigues’ formula for Laguerre polynomials. From these representations of Ln (x ) we ﬁnd the series form (for integral n),

By differentiating the generating function in Eq. (13.56) with respect to x and z,we obtain recurrence relations for the Laguerre polynomials as follows. Using the product rule for differentiation we verify the identities

Writing the left-hand and right-hand sides of the ﬁrst identity in terms of Laguerre polynomials using Eq. (13.56) we obtain

To get the second recursion relation we use both identities of Eqs. (13.61) to verify the third identity,

which, when written similarly in terms of Laguerre polynomials, is seen to be equivalent to

which yields the special values of Laguerre polynomials

This orthogonality is a consequence of the Sturm–Liouville theory The normalization follows from the generating function. It is sometimes convenient to deﬁne orthogonalized Laguerre functions (with unit weighting function) by

which is seen to have the (self-adjoint) Sturm–Liouville form. Note that the interval (0 ≤ x< ∞) was used because Sturm–Liouville boundary conditions are satisﬁed at its endpoints.

In many applications, particularly in quantum mechanics, we need the associated Laguerre polynomials deﬁned by

From the last two members of this equation, canceling the common factor zk , we obtain

From this, for x = 0, the binomial expansion

Thus, we obtain from differentiating Laguerre’s ODE once

Adjusting the index n → n + k , we have the associated Laguerre ODE

The associated Laguerre equation (13.77) is not self-adjoint, but it can be put in selfadjoint form by multiplying by

which becomes the weighting function (Section 10.1). We obtain

The most important application of the Laguerre polynomials is in the solution of the Schrödinger equation for the hydrogen atom. This equation is

in which Z = 1 for hydrogen, 2 for ionized helium, and so on. Separating variables, we ﬁnd that the angular dependence of ψ is the spherical harmonics

For bound states, R → 0as r →∞, and R is ﬁnite at the origin, r = 0. We do not consider continuum states with positive energy. Only when the latter are included do hydrogen wave functions form a complete set.By use of the abbreviations (resulting from rescaling r to the dimensionless radial variable ρ )

We must restrict the parameter λ by requiring it to be an integer n, n = 1, 2, 3,.... This is necessary because the Laguerre function of nonintegral n would diverge as ρn eρ , which is unacceptable for our physical problem, in which

This restriction on λ, imposed by our boundary condition, has the effect of quantizing the energy,

The negative sign reﬂects the fact that we are dealing here with bound states ( E< 0), corresponding to an electron that is unable to escape to inﬁnity, where the Coulomb potential goes to zero. Using this result for En ,wehave

Thus, the ﬁnal normalized hydrogen wave function is written as