GMAT: How to Find Number of Trailing Zeros in a Factorial or Product Notes | Study Quantitative Aptitude for GMAT - GMAT 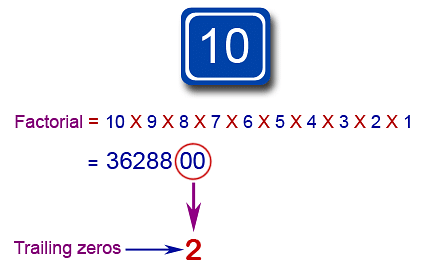 Number of trailing zeroes is the Power of 10 in the expression or in other words, the number of times N is divisible by 10.For a number to be divisible by 10, it should be divisible by 2 & 5.Consider a number N, such thatN = 2a * 5b * xFor the number to have a zero at the end, both a & b should be at least 1.If you want to figure out the exact number of zeroes, you would have to check how many times the number N is divisible by 10.When I am dividing N by 10, it will be limited by the powers of 2 or 5, whichever is lesser.Number of trailing zeroes is going to be the power of 2 or 5, whichever is lesser.Let us look at an example to further illustrate this idea.

Q.1. What is number of trailing zeroes in 12000?Ans. 12000 = 25 * 3 * 53When I divide it by 10, it would be divisible exactly thrice because I have only three 5s.In this case, number of 5s has become the limiting factor and so, the power of 5, which is 3 is the answer.Tip: The power of 5 will be the limiting factor in most cases of continuous distribution. It will happen because 5 is less likely to occur than 2.