In industrial processes, hydrocarbons are contacted with H2O, depending upon the desired effect. When hydrocarbon vapors at very high pressures are contacted with water, water which has a very high latent heat of vaporization quenches the hydrocarbon vapors and transforms into steam. In such an operation, chemical transformations would not be dominant and energy lost from the hydrocarbons would be gained by water to generate steam. The quenching process refers to direct contact heat transfer operations and therefore has maximum energy transfer effeiciency. This is due to the fact that no heat transfer medium is used that would accompany heat losses. The steam cracking of hydrocarbons is an anti-quenching operation, and will involve the participation of water molecule in reactions in addition to teh cracking of the bnydriocarbond on their own. Since steam and the hydrocarbons react in the vapour phase the reaction products can be formed very fast. Therefore cracking of the hydrocarbons on their own as well as by steam in principle is very effective.

When steam cracking is carried out, in addition to the energy supplied by the direct contact of steam with the hydrocarbons, steam also takes part in the reaction to produce wider choices of hydrocarbon distribution along with the generation of H2 and CO. 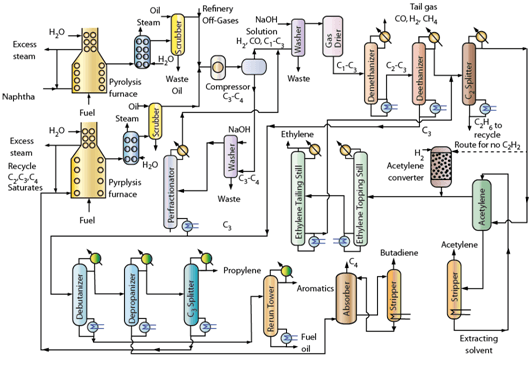 1. Why two separate furnaces are used for C2-C4 saturates and Naphtha feed stocks?

2. Why the product gases from naphtha and C2-C4 saturates steam cracker processed separately before mixing them and sending them to the compressor?

Ans: Both crackers produce products with diverse compositions.  Both cannot be fed to a single scrubber and remove the heavy hydrocarbons and oil components.  While the scrubber associated to naphtha steam cracking needs to be remove significantly the oil and heavy hydrocarbons, this is not the case for steam cracker product vapour processing.

An alternate way of designing a single scrubber is to design a complex scrubber that has multiple feed entry points correspond to both product gases entering from various units.  This refers to process intensification and would be encouraging.

3. Why specifically the gases are compressed to 35 atm?

4. Why is it  not possible to sharply split C3 components in the phase separator?

5. Why a tailing and topping still is required for ethylene production?

Ans: The distillation column for separating ethylene from ethylene from C2 components needs to carry out a difficult separation. This is also due to the fact that the boiling points of C2 components is very close. Therefore, there needs to be two columns (indicating good number of trays).

6. Explain how extractive distillation enables the separation of butadiene?

Ans: Dimethyl formamide (solvent) is fed to the distillation column fed with butadiene, butane and butylenes.  The solvent interacts differently with the components and therefore adjusts the relative volatility of the mixture which was close to 1 previously.  Thereby, the solvent forms a high boiling mixture at the bottom with butadiene and thereby enables the difficult separation of butadiene from the C4 compounds.  Thereby, the solvent + butadiene is fed to a stripper which removes butadiene from the DMF.  One important issue here is that the solvent does not form an azeotrope with the butadiene and is therefore, easy to separate.

7. When acetylene is not required, what process modifications will exist to the technology?

Ans: When acetylene is not required, then the top product from C2 splitter (which is a mixture of acetylene and ethylene) is fed to a packed bed column and H2 to convert the acetylene to ethylene. Eventually, one does not require the absorber-stripper technology for acetylene purification.