As per the Pascal's law, pressure or intensity of pressure at a point in a static fluid (fluid being in rest) is equal in all directions. 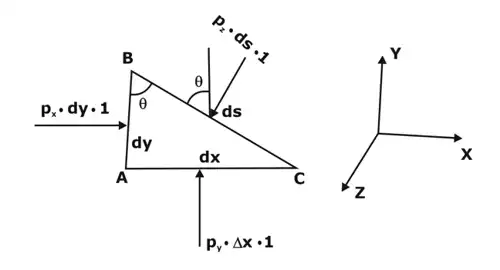 Consider an arbitrary fluid element of wedge shape having very small dimensions i.e. dx, dy and ds as shown in figure.Let us assume the width of the element perpendicular to the plane of paper to be unity and let Px, Py and Pz be the pressure intensities acting on the face AB, AC and BC respectively.Let ∠ ABC = θ. Then the forces acting on the element are:

But ds sin θ = dx and the element is very small and hence dxdy will be negligible i.e. weight of fluid element can be neglected.∴ pydx – pz × dx = 0py = pz  ……… (4)From equations (3) and (4)px = py = pzThe equation above illustrates that the pressure at any point in x, y, and z directions is equal. As the choice of the fluid element was completely random and arbitrary, it means that the pressure at any point is the same in all directions.Examples:Hydraulic lift, hydraulic break, etc. 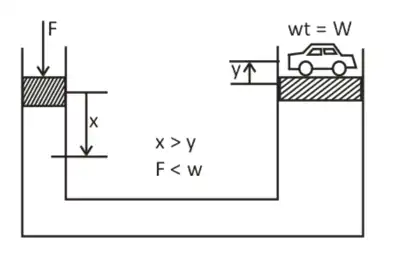 Hydrostatic LawPressure at any point in a fluid at rest is found out by the Hydro-static Law. As per this law, the rate of increase of pressure in a vertically downward direction must be equal to the specific weight of the fluid at that point.Consider a small fluid element as shown 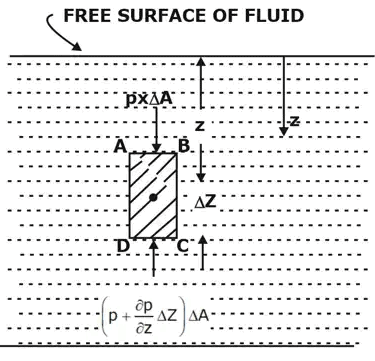 Forces on the fluid element

where,w = Weight density of fluid.Equation (1) states that rate of increase of pressure in a vertical direction is equal to weight density of the fluid at that point. This is Hydrostatic Law.Now, by integrating the above equation (1) for liquids:

p = ρgZ    ……… (2)where p is the pressure above atmospheric pressure and Z is the height of the point from free surface.

Pressure at a depth “h”

Showing a point A location within the fluid 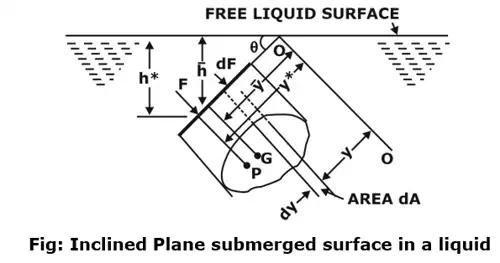 The force is given by:

Hence, we can conclude that the force is independent of the angle of inclination (θ). Thus, the same expression could be used for the force calculation of Horizontal and vertical submerged bodies.

Centre of Pressure (h*):It is the point where whole of the hydrostatic force is assumed to be acting.

Plane vertical surface (θ = 90°)Therefore, centre of pressure for a vertically submerged surface is given by 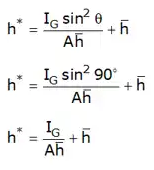 centre of pressure for the vertical submerged surface is given by:

Thus, the centre of pressure of a body submerged parallel to free surface will be equal to the distance of centroid of the body from the free surface. 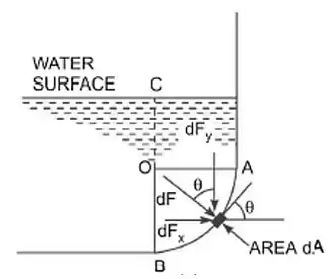 Hydrostatic force on a curved surface

= depth of centroid of an area.This force acts at the center of the pressure of the corresponding area.

The vertical component of force on a curved surface