LEARNING OUTCOMES:After studying this unit, you would be able to:• Understand the concept of breach of contract and various modes thereof.• Be clear about how the damages are to be measured.

An anticipatory breach of contract is a breach of contract occurring before the time fixed for performance has arrived. When the promisor refuses altogether to perform his promise and signifies his unwillingness even before the time for performance has arrived, it is called Anticipatory Breach. Anticipatory breach of a contract may take either of the following two ways:(a) Expressly by words spoken or written, and(b) Impliedly by the conduct of one of the parties.Example 1: Where A contracts with B on 15th July, 2016 to supply 10 bales of cotton for a specified sum on 14th August, 2016 and on 30th July informs B, that he will not be able to supply the said cotton on 14th August, 2016, there is an express rejection of the contract.Example 2: Where A agrees to sell his white horse to B for Rs. 50,000/- on 10th of August, 2016, but he sells this horse to C on 1st of August, 2016, the anticipatory breach has occurred by the conduct of the promisor.

Section 39 of the Indian Contract Act deals with anticipatory breach of contract and provides as follows:“When a party to a contract has refused to perform or disable himself from performing, his promise in its entirety, the promisee may put an end to the contract, unless he has signified, but words or conduct, his acquiescence in its continuance.”Effect of anticipatory breach: The promisee is excused from performance or from further performance. Further he gets an option:(1) To either treat the contract as “rescinded and sue the other party for damages from breach of contract immediately without waiting until the due date of performance; or(2) He may elect not to rescind but to treat the contract as still operative, and wait for the time of performance and then hold the other party responsible for the consequences of non-performance. But in this case, he will keep the contract alive for the benefit of the other party as well as his own, and the guilty party, if he so decides on re-consideration, may still perform his part of the contract and can also take advantage of any supervening impossibility which may have the effect of discharging the contract.ACTUAL BREACH OF CONTRACT:

Remedies for Breach of Contract: 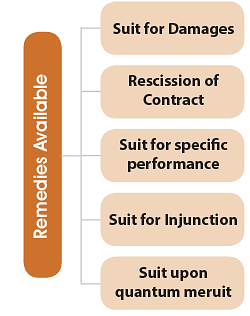 Compensation for loss or damage caused by breach of contract (Section 73):When a contract has been broken, the party who suffers by such a breach is entitled to receive, from the party who has broken the contract, compensation for any loss or damage caused to him thereby, which naturally arose in the usual course of things from such breach, or which the parties knew, when they made the contract, to be likely to result from the breach of it. Such compensation is not to be given for any remote and indirect loss or damage sustained by reason of the breach.

Explanation to Section 73In estimating the loss or damage arising from a breach of contract, the means which existed of remedying the inconvenience caused by the non-performance of the contract must be taken into account.

Analysis of Section 73The Act, in Section 73, has laid down the rules as to how the amount of compensation is to be determined. On the breach of the contract, the party who suffers from such a breach is entitled to receive, from the party who has broken the contract, compensation for any loss or damage caused to him by breach. Compensation can be claimed for any loss or damage which naturally arises in the usual course of events.

A compensation can also be claimed for any loss or damage which the party knew when they entered into the contract, as likely to result from the breach. That is to say, special damage can be claimed only on a previous notice. But the party suffering from the breach is bound to take reasonable steps to minimise the loss. No compensation is payable for any remote or indirect loss.

(i) Ordinary damages: When a contract has been broken, the party who suffers by such breach is entitled to receive, from the party who has broken the contract, compensation for any loss or damage cause to him thereby, which naturally arose in the usual course of things from such breach, or which the parties know, when they made the contract, to be likely to result from the breach of it:Such compensation is not to be given for any remote and indirect loss or damage sustained by reasons of the breach. (Section 73 of the Contract Act and the rule in Hadley vs. Baxendale).

HADLEY vs. BAXENDALE- FactsThe crankshaft of P’s our mill had broken. He gives it to D, a common carrier who promised to deliver it to the foundry in 2 days where the new shaft was to be made. The mill stopped working, D delayed the delivery of the crankshaft so the mill remained idle for another 5 days. P received the repaired crankshaft 7 days later than he would have otherwise received. Consequently, P sued D for damages not only for the delay in the delivering the broken part but also for loss of profits suffered by the mill for not having been worked.  The count held that P was entitled only to ordinary damages and D was not liable for the loss of profits because the only information given by P to D was that the article to be carried was the broken shaft of a mill and it was not made known to them that the delay would result in loss of profits.

Example: A agrees to sell to B bags of rice at Rs. 5,000 per bag, delivery to be given after two months. On the date of delivery, the price of rice goes up to Rs. 5,500 per bag. A refuses to deliver the bags to B. B can claim from A Rs. 500 as ordinary damages arising directly from the breach.

(ii) Special damages: Where a party to a contract receives a notice of special circumstances affecting the contract, he will be liable not only for damages arising naturally and directly from the breach but also for special damages.

Example: ‘A’ delivered a machine to ‘B’, a common carrier, to be conveyed to ‘A’s mill without delay. ‘A’ also informed ‘B’ that his mill was stopped for want of the machine. ‘B’ unreasonably delayed the delivery of the machine, and in consequence ‘A’ lost a profitable contract with the Government. In this case, ‘A’ is entitled to receive from ‘B’, by way of compensation, the average amount of profit, which would have been made by running the mill during the period of delay. But he cannot recover the loss sustained due to the loss of the Government contract, as ‘A’s contract with the Government was not brought to the notice of ‘B’.(iii) Vindictive or Exemplary damages:These damages may be awarded only in two cases -(a) for breach of promise to marry because it causes injury to his or her feelings; and(b) for wrongful dishonour by a banker of his customer’s cheque because in this case the injury due to wrongful dishonour to the drawer of cheque is so heavy that it causes loss of credit and reputation to him. A business man whose credit has suffered will get exemplary damages even if he has sustained no pecuniary loss. But a non-trader cannot get heavy damages in the like circumstances, unless the damages are alleged and proved as special damages. (Gibbons v West Minister Bank)(iv) Nominal damages: Nominal damages are awarded where the plaintiff has proved that there has been a breach of contract but he has not in fact suffered any real damage. It is awarded just to establish the right to decree for the breach of contract. The amount may be a rupee or even 10 paise.(v) Damages for deterioration caused by delay: In the case of deterioration caused to goods by delay, damages can be recovered from carrier even without notice. The word ‘deterioration’ not only implies physical damages to the goods but it may also mean loss of special opportunity for sale.(vi) Prefixed damages: Sometimes, parties to a contract stipulate at the time of its formation that on a breach of contract by any of them, a certain amount will be payable as damage. It may amount to either liquidated damages (i.e., a reasonable estimate of the likely loss in case of breach) or a penalty (i.e., an amount arbitrarily fixed as the damages  payable). Section 74 provides that if a sum is named in a contract as the amount to be paid in case of a breach, the aggrieved party is entitled to receive from the party at fault a reasonable compensation not exceeding the amount so named (Section 74).Example: If the penalty provided by the contract is Rs. 1,00,000 and the actual loss because of breach is Rs. 70,000, only Rs. 70,000 shall be available as damages, i.e., the amount of actual loss and not the amount stipulated. But if the loss is, say, Rs. 1,50,000, then only, Rs. 1,00,000 shall be recoverable.