In this unit we shall briefly examine what is called a ‘contingent contract’, its essentials and the rules regarding enforcement of this type of contracts. Again, the Contract Act recognises certain cases in which an obligation is created without a contract. Such obligations arise out of certain relations which cannot be called as contracts in the strict sense. There is no offer, no acceptance, no consensus ad idem and in fact neither agreement nor promise and yet the law imposes an obligation on one party and confers a right in favour of the other. We shall have a look on these cases of ‘Quasi-contracts’.

1.43 WHAT IS A CONTINGENT CONTRACT ?According to Section 31 of the Act, contingent contract is a contract to do or not to do something, if some event collateral to such contract, does or does not happen. Contracts of insurance are of this class.Example : A contracts to pay B Rs. 1,00,000 if B’s house is destroyed by fire. This is a contingent contract.

1.44 ESSENTIALS OF A CONTINGENT CONTRACT(1) The performance of a contingent contract is made dependent upon the happening or non-happening of some event. A contract may be subject to a condition precedent or subsequent.(2)The event on which the performance is made to depend, is an event collateral to the contract, i.e., it does not form part of the reciprocal promises which constitute the contract. Thus the event should neither be a performance promised, nor the consideration for a promise. Thus (i) where A agrees to deliver 100 bags of wheat and B agrees to pay the price only afterwards, the contract is a conditional contract and not contingent; because the event on which B’s obligation is made to depend is part of the promise itself and not a collateral event. (ii) Similarly, where A promises to pay B Rs. 1,00,000 if he marries C, it is not a contingent contract.(3) The contingent event should not be the mere will of the promisor. For instance, if A promises to pay B Rs. 10,000, if he so chose, it is not a contingent contract. (In fact, it is not a contract at all). However, where the event is within the promisor’s will but not merely his will, it may be contingent contract. For example, if A promises to pay B Rs. 10,000 if A left Delhi for Bombay on a particular day, it is a contingent contract, because going to Bombay is an event no doubt within A’s will, but is not merely his will. 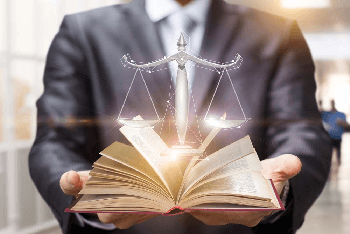 In the case of every contract, the promisor voluntarily undertakes an obligation in favour of the promise. A similar obligation may be imposed by law upon a person for the benefit of another even in the absence of a contract. Such cases are known as quasi contracts. The obligation created in either of the cases is identical. Quasi contracts are based on principles of equity, justice and good conscience.The salient features, of quasi contractual right, are as follows:(a) Firstly, it does not arise from any agreement of the parties concerned, but is imposed by the law; and(b) Secondly, it is a right which is available not against the entire world, but against a particular person or persons only. 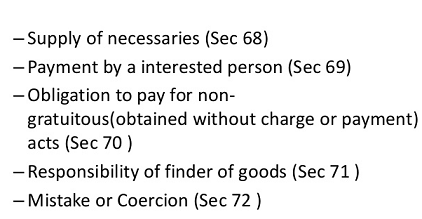 Under the provisions of the Indian Contract Act, the relationship of quasi contract is deemed to have come to exist in five different circumstances which we shall presently dilate upon. But you will notice that in none of these cases there comes into existence any contract between the parties in the real sense. Due to peculiar circumstances in which they are placed, the law imposes in each of these cases of contractual liability.(a) Claim for necessaries supplied to persons incapable of contracting (Section 68): If necessaries are supplied to a person who is incapable of contracting, e.g. minor or a person of unsound mind, the supplier is entitled to claim their price from the property of such a person.Accordingly, if A supplies to B, a lunatic, necessaries suited to B’s status in life, A would be entitled to recover their price from B’s property. He would also be able to recover the price for necessaries supplied by him to his (B’s) wife or minor child since B is legally bound to support them. However, if B has no property, nothing would be realisable. You should, however, note that in such circumstances, the price only of necessaries and not of articles of luxury, can be recovered. To establish his claim, the supplier must prove not only that the goods were supplied to the person who was minor or a lunatic but also that they were suitable to his actual requirements at the time of the sale and delivery. Similarly, if money has been advanced in like circumstances for the purchase of necessaries, its reimbursement can be claimed.(b) Right to recover money paid for another person : A person who has paid a sum of money which another is obliged to pay, is entitled to be reimbursed by that other person provided the payment has been made by him to protect his own interest.(c) Obligation of a person enjoying benefits of non-gratuitous act (Section 70): Such an obligation arises under the provision of Section 70 reproduced below: “Where a person lawfully does anything for another person, or delivers anything to him not intending to do so gratuitously and such other person enjoys the benefit thereof, the latter is bound to make compensation to the former in respect of, or to restore, the thing so done or delivered.” It thus follows that for a suit to succeed, the plaintiff must prove:(i) that he had done the act or had delivered the thing lawfully;(ii) that he did not do so gratuitously; and

(iii) that the other person enjoyed the benefit.(d) Responsibility of a finder of goods: Such a responsibility arises under Section 71 which is reproduced below:“A person who finds goods belonging to another and takes them into his custody is subject to the same responsibility as a bailee”.He is, therefore, required to take proper care of things found, not to appropriate it to his own use and, when the owner is traced, to restore it to the owner. Further, he must take as much care of the goods found as a man of ordinary prudence would, under similar circumstances, take care of his own goods of the same bulk, quantity and value as those of the goods found. Let us exemplify this rule by means of an illustration. P, a customer in D’s shop, puts down a broach with her coat and forgets to pick it up. One of D’s assistants found it and it was placed in a drawer over the weekend. On Monday, it was discovered as missing. D was liable to P in view of the absence of that ordinary care which in the circumstances, a prudent man would have taken.(e) Liability for money paid or thing delivered by mistake or under coercion: Such liability arises under Section 72 of the Contract Act which is reproduced below:“A person to whom money has been paid, or anything delivered, by mistake or under coercion must repay or return it.”In each of the above cases, contractual liability is the creation of law and does not depend upon any mutual agreement between the parties.

1.49 SUMMARYContingent Contracts are the contracts, which are conditional on some future event happening or not happening and are enforceable when the future event or loss occurs. (Section 31)Rules for enforcement(a) If it is contingent on the happening of a future event, it is enforceable when the event happens. The contract becomes void if the event becomes impossible, or the event does not happen till the expiry of time fixed for happening of the event.(b) If it is contingent on a future event not happening. It can be enforced when happening of that event becomes impossible or it does not happen at the expiry of time fixed for non-happening of the event.(c) If the future event is the act of a living person, any conduct of that person which preventsthe event happening within a definite time renders the event impossible.(d) If the future event is impossible at the time of the contract is made, the contract is void ab initio.Quasi Contracts arise where obligations are created without a contract. The obligations which they give rise to are expressly enacted:(a) If necessaries are supplied to a person who is incapable of contracting, the supplier is entitled to claim their price from the property of such a person.(b) A person who is interested in the payment of money which another is bound to pay, and who therefore pays it, is entitled to be reimbursed by the other.(c) A person who enjoys the benefit of a non-gratuitous act is bound to make compensation.(d) A person who finds lost property may retain it subject to the responsibility of a bailee.(e) If money is paid or goods delivered by mistake or under coercion, the recipient must repay or make restoration.