Transactions are first entered in this book to show which accounts should be debited and which credited. Journal is also called subsidiary book. Recording of transactions in journal is termed as journalizing the entries.

All transactions are first recorded in the journal as and when they occur; the record is chronological; otherwise it would be difficult to maintain the records in an orderly manner. The form of the journal is given below :

The columns have been numbered only to make clear the following but otherwise they are not numbered. The following points should be noted:

(i) In the first column the date of the transaction is entered-the year is written at the top, then the month and in the narrow part of the column the particular date is entered.

(ii) In the second column, the names of the accounts involved are written; first the account to be debited, with the word “Dr” written towards the end of the column. In the next line, after leaving a little space, the name of the account to be credited is written preceded by the word “To” (the modern practice shows inclination towards omitting “Dr.” and “To”). Then in the next line the explanation for the entry together with necessary details is given-this is called narration.

(iii) In the third column the number of the page in the ledger on which the account is written up is entered.

(iv) In the fourth column the amounts to be debited to the various accounts concerned are entered.

(v) In the fifth column, the amount to be credited to various accounts is entered.

8.2 POINTS TO BE TAKEN INTO CARE WHILE RECORDING  A TRANSACTION  IN THE JOURNAL

2. If journal entries are recorded in several pages then both the amount column of each page should be totalled and the balance should be written at the end of that page and also that the same total should be carried forward at the beginning of the next page.

An entry in the journal may appear as follows:

We will now consider some individual transactions.

5,000. This means t hat the firm has ` 5,000 cash. According to the rules given above, the increase in an asset has to be debited to it. The firm also now owes

5,000 to the proprietor, Mohan as capital. The rule given above also shows that the increase in capital should be credited to it. Therefore, the journal entry will be:

500 is deposited in the bank. By this transaction the cash balance is reduced by

500 and another asset, bank account, comes into existence. Since increase in assets is debited and decrease is credited, the journal entry will be:

(iii) Furniture is purchased for cash

200. Applying the same reasoning as above the entry will be:

400. The student can see that the required entry is:

1,000 credit from M/s. Ram Narain Bros. Purchase of merchandise is an expense item so it is to be debited.

1,000 is now owing to the supplier; his account should therefore be credited, since the amount of liabilities has increased. The entry will be:

600. The amount of cash increases and therefore, the cash amount should be debited; sale of merchandise is revenue item so it is to be credited. The entry will be:

(vii) Sold goods to Ramesh on credit for

300. The Inventories of goods has decreased and therefore, the goods account has to be credited. Ramesh now owes ` 300; that is an asset and therefore, Ramesh should be debited. The entry is:

300. The amount of cash increased therefore the cash account has to be debited. Ramesh no longer owes any amount to the firm, i.e., this particular form of assets has disappeared; therefore, the account of Ramesh should be credited. The entry is:

1,000. The liability to M/S Ram Narain Bros. has been discharged; therefore this account should be debited. The cash balance has decreased and, therefore, the cash account has to be credited. The entry is:

100. The cash balance has decreased and therefore, the cash account should be credited. No asset has come into existence because of the payment; the payment is for services enjoyed and is an expense. Expenses are debited. Therefore, the entry should be:

200 to the clerk as salary. Applying the reasons given in (x) above, the required entry is:

When transactions of similar nature take place on the same date, they may be combined while they are journalised. For example, entries (x) and (xi) may be combined as follows

When journal entry for two or more transactions are combined, it is called composite journal entry. Usually, the transactions in a firm are so numerous that to record the transactions for a month will require many pages in the journal. At the bottom of one page the totals of the two columns are written together with the words “Carried forward” in the particulars column. The next page is started with the respective totals in the two columns with the words “Brought forward” in the particulars column.

5,000.What conclusions one can draw from the above analysis? 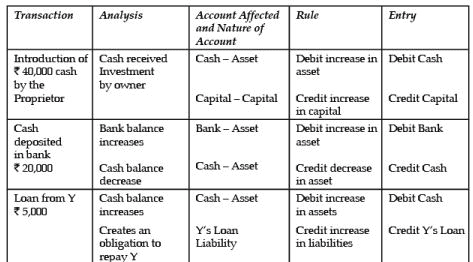 Conclusion: It is evident from above analysis that procedure for analysis of transactions, classification of accounts and rules for recording business transactions under accounting equation approach and traditional approach are different. But the accounts affected and entries in affected accounts remain same under both approaches. Thus, the recording of transactions in affected accounts on the basis of double entry system is independent of the method of analysis followed by a business enterprise. In other words, accounts to be debited and credited to record the dual aspect remain same under both the approaches.

Illustration 4 Journalise the following transactions. Also state the nature of each account involved in the Journal entry.

500 and salaries to staff 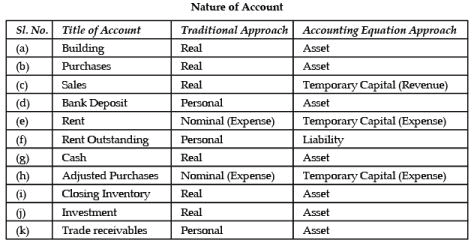 Illustration 6 Transactions of Ramesh for April are given below. Journalise them. 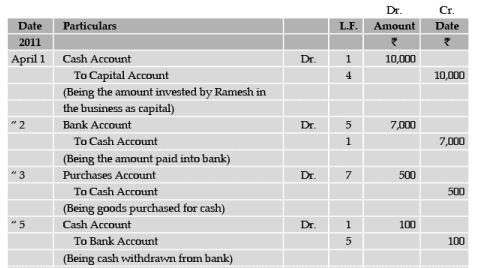 Illustration 7 Pass Journal Entries for the following transactions in the books of Gamma Bros.

(i) Employees had taken inventory worth

7,500) on the eve of Deepawali and the same was deducted from their salaries in the subsequent month.(ii) Wages paid for erection of Machinery

1,700 was paid out of petty cash.(iv) Purchase of goods from Naveen of the list price of

50 cash discount was also allowed for quick payment.Solution Journal Entries in the books of Gamma Bros.

1. As transactions are recorded on chronological order, one can get complete information about the business transactions on time basis.

2. Entries recorded in the journal are supported by a note termed as narration, which is a precise explanation of the transaction for the proper understanding of the entry. One can know the correctness of the entry through these narrations.

3. Journal forms the basis for posting the entries in the ledger. This eases the accountant in their work and reduces the chances of error.