There are following two methods of reconciling the bank balances :

For reconciliation purposes students can take any of the four balances as the starting point and can proceed further with the causes of differences.  Based on the earlier explanation the following table has been prepared for student’s ready reference when reconciliation is done on the basis of ‘Balance’ presentation. The final balance, which will come after addition and subtraction, will be the balance as per the other book.

It is proper to prepare a neat statement showing the reconciliation of the two balances. Taking the example given in the para 5.2, the statement may be prepared as follows: 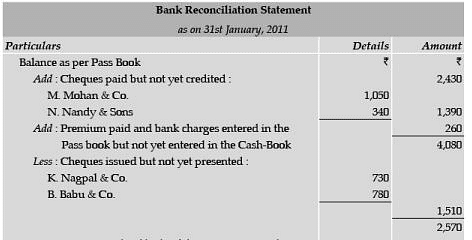 Illustration 1 From the following particulars ascertain the balance that would appear in the Bank Pass Book of A on 31st December, 2011.

30 are debited in the Pass Book only.

(5) Cheques paid into bank but not cleared before 31st December, 2011 were for

The above illustration can also be presented with the column for “Plus” and “Minus.” 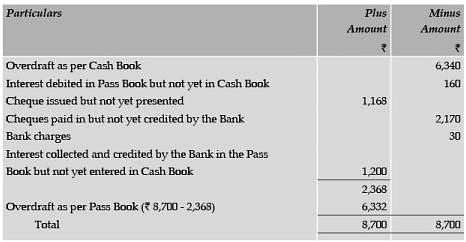 7.2 BANK RECONCILIATION STATEMENT AFTER THE PREPARATION OF  ADJUSTED CASH-BOOK

Illustration 2 On 30th September, 2011, the bank account of X, according to the bank column of the Cash- Book, was overdrawn to the extent of

4,062. On the same date the bank statement showed a balance of

1,400 in favour of X. An examination of the Cash Book and Bank Statement reveals the following :

1,740 received from a customer of X, but the advice was not received by X until 1st October, 2011.4. Bank charges amounting to

(a) to show the appropriate rectifications required in the Cash Book of X, to arrive at the correct balance on 30th September, 2011 and(b) to prepare a bank reconciliation statement as on that date.Solution

Note : Bank has credited X by 2,000 in error on 6th September, 2011. If this mistake is rectified in the bank statement, then this will not be deducted in the above statement along with

3,760 resulting in debit balance of

Illustration 3 On 30th December, 2011 the bank column of A. Philip’s cash book showed a debit balance of

461. On examination of the cash book and bank statement you find that :

630 which were issued to trade payables and entered in the cash book before 30th December, 2011 were not presented for payment until that date. 2. Cheques amounting to

73 had been dishonoured prior to 30th December, 2011, but no record of this fact appeared in the cash book.4. A dividend of

38, paid direct to the bank had not been recorded in the cash book.5. Bank interest and charges amounting to

27 drawn by B. Philip had been charged to A. Philip’s bank account by mistake in December, 2011.You are required : (a) to make appropriate adjustments in the cash book bringing down the correct balance, and(b) to prepare a statement reconciling the adjusted balance in the cash book with the balance shown in the bank statement.Solution 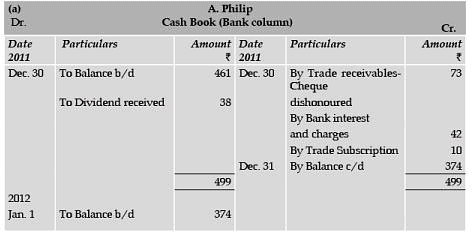 Illustration 4 From the following information, prepare a Bank reconciliation statement as at 31st December, 2011 for Messrs New Steel Limited : 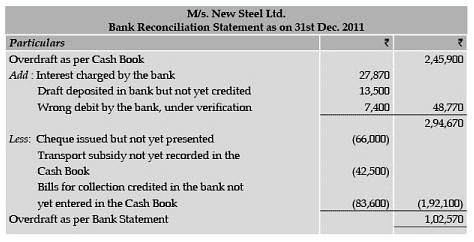 8,364 as the balance at Bank as on 31st December, 2011, but you find that it does not agree with the balance as per the Bank Pass Book. On scrutiny, you find the following discrepancies :

1,526 as on the previous day, was brought forward as credit balance.(5) Of the total cheques amounting to

250 collected by the Bank and subscription of `

100 paid by it were not recorded in the Cash Book.(7) One out-going Cheque of

350 was recorded twice in the Cash Book. Prepare a Reconciliation Statement. 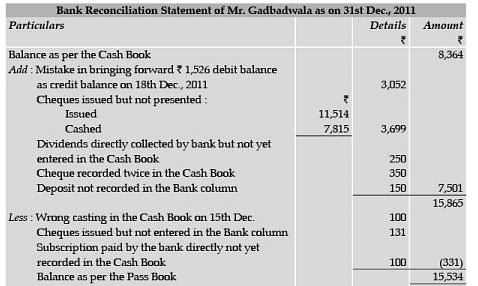 Illustration 6 The following are the Cash Book and Pass Book of Jain for the month of March, 2011 and April, 2011.

On scrutiny of the debit side of the Cash Book of March 2011 and receipt side of the Pass Book of April, 2011 reveals that :

6,500) in March were not credited by the Bank till 31/3/2011 and on scrutiny of the credit side of the cash book and payment side of the Pass Book reveals that :

2. A cheque issued to Ramesh for

Illustration 7 When Nikki & Co. received a Bank Statement showing a favourable balance of

10,392 for the period ended on 30th June, 2011, this did not agree with the balance in the cash book.An examination of the Cash Book and Bank Statement disclosed the following

4,000 paid the firm a cheque on 12th June. The cashier erroneously entered the gross amount in the bank column of the Cash Book.4. Bank charges amounting to

300 had not been entered in Cash-Book.5. On 28th June, a customer of the company directly deposited the amount in the bank

1,200 paid into the bank had been entered twice in the Cash Book.7. A debit of

100 appeared in the Bank Statement for an unpaid cheque, which had been returned marked ‘out of date’. The cheque had been re-dated by the customer and paid into Bank again on 5th July, 2011. 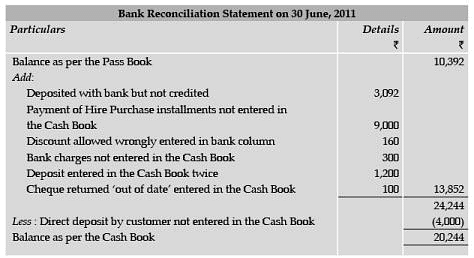 Illustration 8 The bank account of Mukesh was balanced on 31st March, 2011. It showed an overdraft of

5,000. The bank statement of Mukesh showed a credit balance of

76,750. Prepare a bank reconciliation statement taking the following into account :

1,00,000 representing collection of Murukesh’s cheque was wrongly credited to the account of Mukesh by the bank in their bank statement. 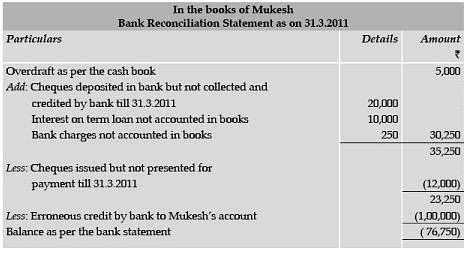 Illustration 9 From the following information (as on 31.3.2011), prepare a bank reconciliation statement after making necessary amendments in the cash book.

The bank balance of

Illustration 10 On 31st March, 2011 the pass-book of a trader showed a credit balance of

1,565, but the pass book balance was different for the following reasons from the cash book balance:

384 were not yet presented for payment.2. Bank charged ` 35 for bank charges and ‘Z’ directly deposited

816 into the bank account, which were not entered in the cash book.3. Two cheques one from ‘A’ for 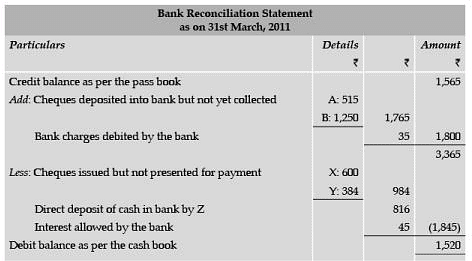