Where it is practicable to keep a record of the actual running hours of each machine, depreciation may be calculated on the basis of hours that the concerned machine worked. The machine hour rate of the depreciation, is calculated after estimating the total number of hours that machine would work during its whole life; however, it may have to be varied from time to time, on a consideration of the changes in the economic and technological conditions which might take place, to ensure that the amount provided for depreciation corresponds to that considered appropriate in the changed circumstances. It would be observed that the method is only a slight variation of the Straight Line Method under which depreciation is calculated per year. Under this method it is calculated for each hour the machine works.

A machine was purchased for

20,000 and anticipated pattern of distribution of effective hours is as follows :

Under this method depreciation of the asset is determined by comparing the annual production with the estimated total production. The amount of depreciation is computed by the use of following method :

Depreciation for the period = Depreciable Amount

The method is applicable to machines producing product of uniform specifications.

A machine is purchased for

20,000. The machine is expected to produce 1.5 lakh units during its life time. Expected distribution pattern of production is as follows:

Determine the value of depreciation for each year using production units method.

1,00,00,000. As per technical estimate the total quantity of mineral deposit is 2,00,000 tonnes. Depreciation was charged on the basis of depletion method. Extraction pattern is given in the following table: 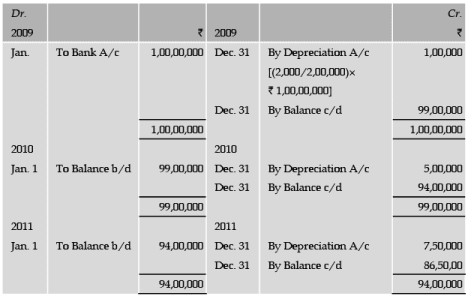 4.  PROFIT OR LOSS ON THE SALE / DISPOSAL OF DEPRECIABLE ASSETS

Whenever any depreciable asset is sold during the year, depreciation is charged on it for the period it has been used in the sale year. The written down value after charging such depreciation is used for calculating the profit or loss on the sale of that asset. The resulting profit or loss on sale of the asset is ultimately transferred to profit and loss account.For example: The book value of the asset as on 1st January, 2011 is

32,000. In such a situation, profit or loss on the sale will be calculated as follows:

A firm purchased on 1st January, 2010 certain machinery for

38,600 and on the same date fresh machinery was purchased at a cost of

40,000. Depreciation was provided for annually on 31st December at the rate of 10 per cent p.a. on written down value. Prepare machinery account. 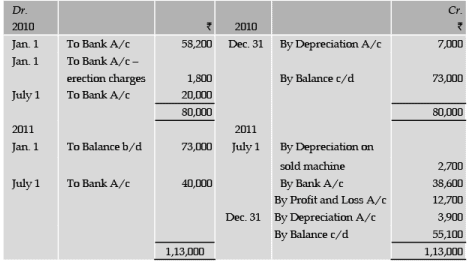 A company’s plant and machinery account at 31st December, 2011 and the corresponding depreciation provision account, broken down by year of purchase are as follows:

Depreciation is at the rate of 10% per annum on cost. It is the Company’s policy to assume that all purchases, sales or disposal of plant occurred on 30th June in the relevant year for the purpose of calculating depreciation, irrespective of the precise date on which these events occurred.During 2012 the following transactions took place:

1. Purchase of plant and machinery amounted to

You are required to:

Calculate the provision for depreciation of plant and machinery for the year ended 31st December, 2012. In calculating this provision you should bear in mind that it is the company’s policy to show any profit or loss on the sale or disposal of plant as a completely separate item in the Profit and Loss Account.

Calculation of provision for depreciation of plant and machinery for the year ended 31st December, 2012.

Prepare the following ledger accounts during 2012 from the information given in illustration 11 :

(iii) Sale or disposal of Plant and Machinery Account (for 2012)

The Machinery Account of a Factory showed a balance of

28,000 and installation charges incurred in erecting the machine works out to

750. Another machine which had cost

Write a plant and machinery account for the year 2012, allowing the same rate of depreciation as in the past calculating depreciation to the nearest multiple of a Rupee.