A forfeited share is merely a share available to the company for sale and remains vested in the company for that purpose only. Reissue of forfeited shares is not allotment of shares but only a sale.The share, after forfeiture, in the hands of the company is subject to an obligation to dispose it of. In practice, forfeited shares are disposed off by auction. These shares can be re-issued at any price so long as the total amount received (from the original allottee and the second purchaser) for those shares is not less than the amount in arrear on those shares.

In connection with re-issue, the following points are important:

12.2 CALCULATION OF PROFIT ON RE-ISSUE OF FORFEITED SHARES

Students will appreciate that the credit balance of forfeited shares account cannot be considered a surplus until the shares forfeited have been re-issued, because the company may, on re-issue, allow the discount to the new purchaser equivalent to the amount held in credit in this regard in the forfeited shares Account. Suppose 120 shares of a nominal value of Rs 10 have been forfeited upon which Rs 5 per share was paid up and transferred to Forfeited Share Account. Afterwards, 50 shares are re-issued, Rs 6 per share being collected to make them fully paid up; Rs 200 out of shares forfeited will be credited to Share Capital Account to make up the deficiency on re-issued shares, and Rs 50 will be transferred to the Capital Reserve Account being the surplus on re-issue of the 50 shares. It would have in the Forfeited shares Account balance equivalent to the amount collected on the remaining 70 forfeited shares which will be carried forward till these are re-issued.In the above case, it has been assumed that the amount paid up on all the 120 forfeited shares was Rs 5 per share. But in practice, shares may be forfeited on which varying amounts are out-standing.

For instance, if in the above case 70 shares were forfeited with Rs 5 paid up thereon and 50 shares with Rs 7.50 was paid up thereon, the credit in the forfeited Shares Account would be Rs 725. The amount to be credited to Capital Reserve will depend on the lot of shares re-issued; it will be Rs 175 if the shares are those on which Rs 7.50 was originally paid.

Mr. Long who was the holder of 200 preference shares of Rs 100 each, on which Rs 75 per share has been called up could not pay his dues on Allotment and First call each at Rs 25 per share. The Directors forfeited the above shares and reissued 150 of such shares to Mr. Short at Rs 65 per share paid-up as Rs75 per share.Give Journal Entries to record the above forfeiture and re-issue in the books of the company.

working note:(1) calculation of amount to be transferred to capital reserve

Beautiful Co. Ltd issued 3,000 equity shares of Rs10 each payable as Rs 3 per share on Application, Rs 5 per share (including Rs 2 as premium) on Allotment and Rs 4 per share on Call. All the shares were subscribed. Money due on all shares was fully received excepting Ram, holding 50 shares, failed to pay the Allotment and Call money and Shyam, holding 100 shares, failed to pay the Call Money. All those 150 shares were forfeited. Of the shares forfeited, 125 shares (including whole of RamRss shares) were subsequently re-issued to Jadu as fully paid up at a discount of Rs 2 per share.Pass the necessary entries in the Journal of the company to record the forfeiture and re-issue of the share. Also prepare the Balance Sheet of the company.

In the books of beautiful co. Ltd.

Balance Sheet of Beautiful Limited as at……

Working Note : (1) calculation of amount to be transferred to capital reserve

B Ltd. issued 20,000 equity shares of Rs 10 each at a premium of Rs 2 per share payable as follows: on application Rs 5; on allotment Rs 5 (including premium); on final call Rs 2. Applications were received for 24,000 shares. Letters of regret were issued to applicants for 4,000 shares and were allotted to all the other applicants. Mr. A, the holder of 150 shares, failed to pay the allotment and call money, the shares were forfeited. Show the Journal Entries and Cash Book in the books of B Ltd.

In the books of b Ltd. cash book (bank column only) 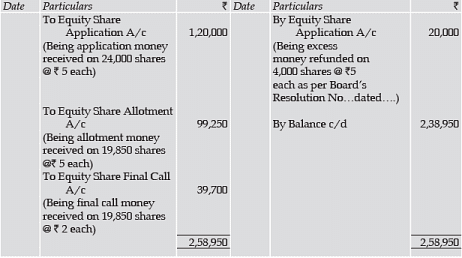 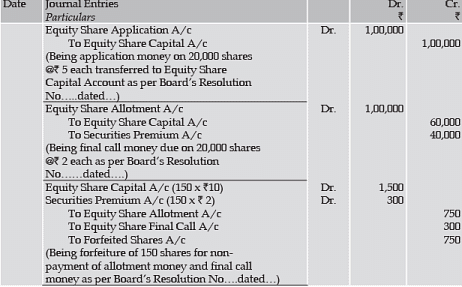 Tutorial Note : Here, securities premium on forfeited shares has not been realised, so Securities Premium Account will be debited at the time of forfeiture of these shares.

13. ISSUE OF SHARES FOR CONSIDERATION OTHER THAN CASH

Public limited companies, generally, issue their shares for cash and use such cash to buy the various types of assets needed in the business. Sometimes, however, a company may issue shares in a direct exchange for land, buildings or other assets. Shares may also be issued in payment for services rendered by promoters, lawyers in the formation of the company. These shares should be shown separately under the heading RsShare CapitalRs.Within specified time of allotment, the company must produce before the Registrar a written contract of sale of service in respect of which shares have been allotted.

(a) When assets are purchased in exchange of shares

(b) When shares are issued to promoters

X Co. Ltd. was incorporated with an authorized share capital of 1,00,000 equity shares of Rs 10 each. The directors decided to allot 10,000 shares credited as fully paid to the promoters for their services.The company also purchased land and buildings from Y Co. Ltd for Rs 4,00,000 payable in fully paid-up shares of the company. The balance of the shares were issued to the public, which were fully subscribed and paid for.You are required to pass Journal Entries and to prepare the Balance Sheet.

balance Sheet of x company Limited as at….