In the earlier units of this chapter, we have studied the issue of share capital as a means of raising funds for financing the business activities. But with increasing and ever growing needs of the corporate expansion and growth, equity source of financing is not sufficient. Hence corporates turn to debt financing through various means. Issuing debt instruments by offering the same for public subscription is one of the sources of financing the business activities. Debt financing does not only helps in reducing the cost of the capital but also helps in designing appropriate capital structure of the company. Debenture is one of the most commonly used debt instrument issued by the company to raise funds for the business.

The most common method of supplementing the capital available to a company is to issue debentures which may either be simple or naked carrying no charge on assets, or mortgage debentures carrying either a fixed or a floating charge on some or all of the assets of the company.

A debenture is a bond issued by a company under its seal, acknowledging a debt and containing provisions as regards repayment of the principal and interest. If a charge* has been created on any or on the entire assets of the company, the nature of the charge and the assets charged are described therein. Since the charge is not valid unless registered with the Registrar, and the certificate registering the charge is printed on the bond. It is also customary to create a trusteeship in favour of one or more persons in the case of mortgage debentures. The trustees of debenture holders have all powers of a mortgage of a property and can act in whatever way they think necessary to safeguard the interest of debenture holders.

1. It is a document which evidences a loan made to a company.2. It is a fixed interest-bearing security where interest falls due on specific dates.3. Interest is payable at a predetermined fixed rate, regardless of the level of profit.4. The original sum is repaid at a specified future date or it is converted into shares or other debentures.5. It may or may not create a charge on the assets of a company as security.6. It can generally be bought or sold through the stock exchange at a price above or below its face value.

4. DISTINCTION BETWEEN DEBENTURES AND SHARES

The following are the types of debentures issued by a company. They can be classified on the basis of: (1) Security; (2) Convertibility; (3) Permanence; (4) Negotiability; and (5) Priority. 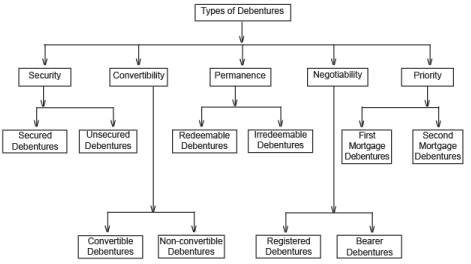 (a) Secured Debentures : These debentures are secured by a charge upon some or all assets of the company. There are two types of charges: (i) Fixed charge; and (ii) Floating charge. A fixed charge is a mortgage on specific assets. These assets cannot be sold without the consent of the debentureholders. The sale proceeds of these assets are utilized first for repaying debentureholders. A floating charge generally covers all the assets of the company including future one.

(b) Unsecured or “Naked” Debentures : These debentures are not secured by any charge upon any assets. A company merely promises to pay interest on due dates and to repay the amount due on maturity date. These types of debentures are very risky from the view point of investors.

(a) Convertible Debentures :  These are debentures which will be converted into equity shares (either at par or premium or discount) after a certain period of time from the date of its issue. These debentures may be fully or partly convertible. In future, these debentureholders get a chance to become the shareholders of the company.

(b) Non-Convertible Debentures : These are debentures which cannot be converted into shares in future. As per the terms of issue, these debentures are repaid.

(a) Redeemable Debentures :  These debentures are repayable as per the terms of issue, for example, after 8 years from the date of issue.

(b) Irredeemable Debentures : These debentures are not repayable during the life time of the company. These are also called perpetual debentures. These are repaid only at the time of liquidation.

(a) Registered Debentures : These debentures are payable to a registered holder whose name, address and particulars of holding is recorded in the Register of Debentureholders. They are not easily transferable. The provisions of  the Companies Act, 2013 are to be complied with for effecting transfer of these debentures. Debenture interest is paid either to the order of registered holder as expressed in the warrant issued by the company or the bearer of the interest coupons.

(b) Bearer Debentures : These debentures are transferable by delivery. These are negotiable instruments payable to the bearer. No kind of record is kept by the company in respect of the holders of such debentures. Therefore, the interest on it is paid to the holder irrespective of any identity. No transfer deed is required for transfer of such debentures.