8. ISSUE OF DEBENTURES IN CONSIDERATION OTHER THAN FOR CASH

Just like shares, debentures can also be issued for consideration other than for cash, such as for purchase of land, machinery, etc. In this case, the following entries are passed :

In the books of X company Ltd.

Note : No entry is made in the books of account of the company at the time of making issue of such debentures. In the Balance Sheet the fact that the debentures being issued as collateral security and outstanding are shown under the respective liability.

9. TREATMENT OF DISCOUNT/LOSS ON ISSUE OF DEBENTURES

The discount on issue of debentures is amortised over a period between the issuance date and redemption date. It should be written-off in the following manner depending upon the terms of redemption:

(a) If the debentures are redeemable after a certain period of time, say at the end of 5 years, the total amount of discount should be written-off equally throughout the life of the debentures (applying the straight line method). The main advantage of this method is that it spreads the burden of discount equally over the years.

(b) If the debentures are redeemable at different dates, the total amount of discount should be written-off in the ratio of benefit derived from debenture loan in any particular year (applying the sum of the year’s digit method). This method is suitable when debentures are redeemed by unequal instalments.

The accounting entries would be as follows :

Loss on issue of debentures is also a capital loss and should be written off in a similar manner as discount on debentures issued. In the balance sheet both the items (Discount and Loss) are shown as Non-current/current assets depending upon the period for which it has to be written off.

Calculation of amount of discount to be written-off

Interest payable on coupon debenture is treated as a charge against the profits of the company. Interest on debenture is paid periodically and is calculated at coupon rate on the nominal value of debentures. The company will pay interest net of tax to the debenture holders because the company is under obligation to deduct tax at source at the rates applicable under tax rules from time to time. The companies will deposit the tax so deducted with income tax authorities. Following accounting entries are to be recorded in this regard: 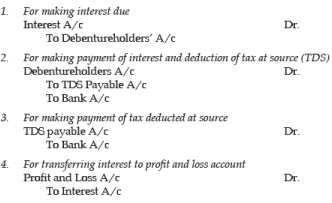 It may be noted that loss on issue of debenture is also written off in the ratio of debentures outstanding during different accounting years.