The Mathematical Olympiad Programme in India, which leads to participation of Indian students in the International Mathematical Olympiad (IMO) is organized by the Homi Bhabha Centre for Science Education (HBCSE) on behalf of the National Board for Higher Mathematics (NBHM) of the Department of Atomic Energy (DAE), Government of India. This programme is one of the major initiatives undertaken by the NBHM. Its main purpose is to spot mathematical talent among pre-university students in the country.

For the purpose of training and selection of students for the Olympiad contest, 25 regions all over the country have been designated and each assigned a Regional Coordinator (RC). Additionally, three groups (Central Board of Secondary Education (CBSE), Navodaya Vidyalaya Samiti (NVS) and Kendriya Vidyalaya Sangathana (KVS) have a ‘Regional Coordinator’ each. The Mathematical Olympiad programme consists of six stages. 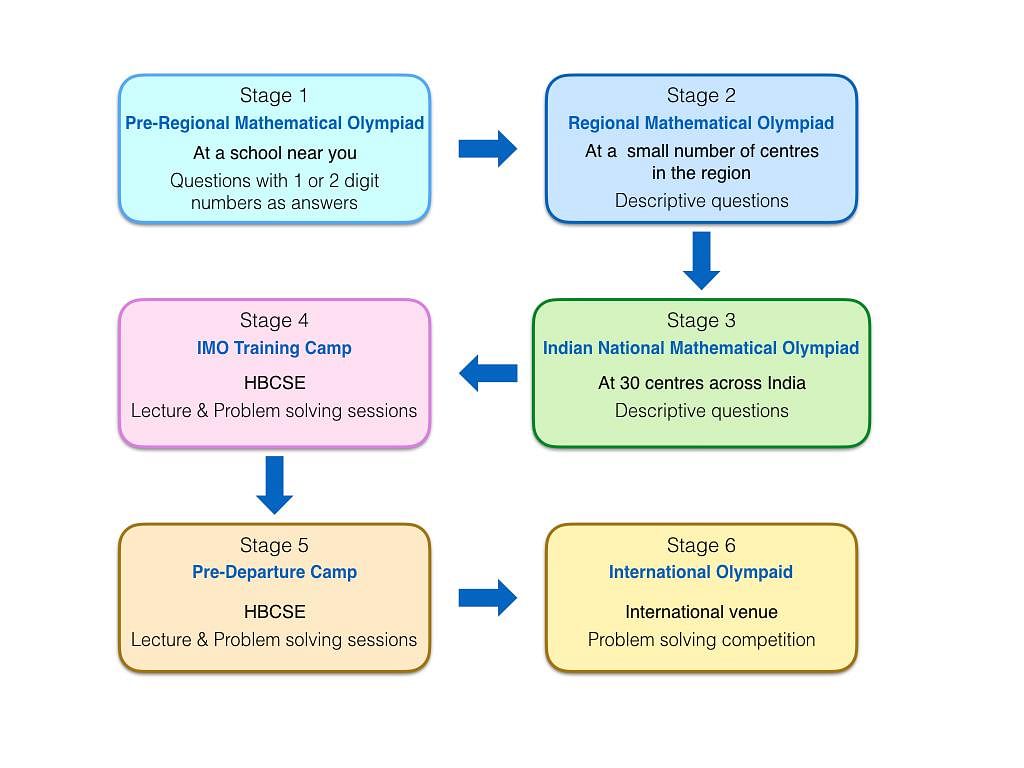 The first stage examination, the pre-Regional Mathematical Olympiad (PRMO) is a two and half hour examination with 30 questions. The answer to each question is either a single digit number or a two digit number and will need to be marked on a machine readable OMR response sheet. The PRMO question paper will be in English and Hindi.

Instructions for how to enroll for PRMO will be available after April 30, 2019.

Queries regarding PRMO may be sent by email to mtaprmo@gmail.com Queries will not be replied to individually.

The second stage examination, the Regional Mathematical Olympiad (RMO) is a three hour examination with six problems. The RMOs are offered in English, Hindi and other regional languages as deemed appropriate by the respective Regional Coordinators.  The problems under each topic involve high level of difficulty and sophistication.

The best-perfroming students from the RMO (approximately 900) qualify for the third stage – the Indian National Mathematical Olympiad (INMO). The INMO is held on the third Sunday of January at 28 centres across the country.

The top students from the INMO (approximately 35) are invited for the fourth stage, the International Mathematical Olympiad Training Camp (IMOTC) held at HBCSE during April to May. At this camp orientation is provided to students for the International Mathematical Olympiad (IMO). Emphasis is laid on developing conceptual foundations and problem-solving skills. Several selection tests are held during this camp. On the basis of perfromance in these tests six students are selected to represent India at the IMO. Resource persons from different institutions across the country are invited to the training camps.

The selected team undergoes a rigorous training programme for about 8-10 days at HBCSE prior to its departure for the IMO.

The Olympiad programme culminates with the participation of the students in the IMO. The students are accompanied by 4 teachers or mentors.

The INMO is conducted by the MO CELL which is held on the third Sunday of January at 30 centers across the country. Prospective candidates first need to write the Pre-Regional Mathematical Olympiad(known as PRMO) then the Regional Mathematical Olympiad of their respective state or region. Around thirty students are selected from each region, to write the INMO. The best-performing students from the RMO (approximately 900) qualify for the second stage INMO.

The important PRMO exam dates are tabulated below:

The document INTRODUCTION ABOUT MATHEMATICS OLYMPIAD Notes - JEE is a part of JEE category.
All you need of JEE at this link: JEE