Pad cells surround the rectangular metal patches where external bonds are made. Pads must be sufficiently large and sufficiently spaced apart from each other. There are three types of pad cells, input, output, power (also, tristate, analog). Typical structures inside pad cells should have

Pads are generally arranged around the chip perimeter in a "pad frame". Pad frame will have a signal ring of pads in smaller designs. Lower limit on pad size is minimum size to which a bond wire can be attached; typically 100-150 micrometers. It is also a minimum pitch at which bonding machines can operate.

Input pads of gates of input buffer transistors are susceptible to high voltage build up, so we need to have ESD protection for it. Output pads are expected to drive large capacitance loads, so characteristics of load must be met by proper sizing of output buffer. Due to large transistors, I/O currents are higher and hence Latch-Up may occur. To prevent this, we use guard rings in layout. For area efficiency, I/O transistors should be constructed from several small transistors in parallel. Long gates must be provided to reduce avalanche breakdown tendency

ESD damage is usually caused by poor handling procedures. ESD is especially severe in low humidity environments. Electrostatic discharge is a pervasive reliability concern in VLSI circuits. It is a short duration (<200ns) high current (>1A) event that causes irreparable damage. The most common manifestation is the human body ESD event, where a charge of about 0.6uC can be induced on a body capacitance of 100pF, leading to electrostatic potentials of 4KV or greater.

Whenever body comes in contact with plastic or other insulating material, static charge is generated. It can be a very small charge, as low as nano Coulombs, but it can cause potential damage to MOS devices, as voltages are pretty high.

Let us consider a modest 1pF capacitor, in which, this 1nC charge is put (can be through a 100uA current for a millisec). This results in

This can easily be generated by walking across a carpet!! A human touch can produce instanteous voltages of 20,000 volts! These clamping transistors are very big structures consisting of a number of transistors connected in parallel, and are able to sustain significant current. The thick field NMOS used design is not suitable for deep submicron processes, and the thin field oxide NMOS presents oxide breakdown problems while interfacing between blocks with high power supply voltages.

Scaling of VLSI devices have reduced the dimensions of all structures used in ICs and this has increased their susceptibility to ESD damage. Hence ESD protection issues are becoming increasingly important for deep submicron technologies. The gate oxide thicknesses are approaching the tunneling regime of around 35 Angstroms. From an ESD perspective, the important issue is whether the oxide breakdown is reached before the protection devices are able to turn on and protect them!

The intra-chip buffer circuits are relatively well known. They are fast, and need only be as big as needed to drive their particular load capacitances. However, in the inter-chip buffer design case, there are some very important limitations. First, these buffers must be able to drive large capacitive loads, as they are driving off-chip signals, which means driving I/O pads, parasitic board capacitances, and capacitances on other chips. Adding a few picofarads of capacitance at the output node is really inconsequential, and shouldnt significantly degrade the propagation delay through this structure. So, the O/P load for worst case design is considered to be 50 times normal load, approximately 50pF. The simplest driver for the output pad consists of a pair of inverters with large transistors in addition to the standard ESD protection circuitry. The driver must be able to supply enough current (must have enough driving capability) to achieve satisfactory rise and fall times (tr, tf) for a given capacitive load. In addition the driver must meet any required DC characteristics regarding the levels of output voltages for a given load type, viz. CMOS or TTL.

Design method is same as we have already discussed in previous lectures. Optimum number of stages are found for a load capacitance assumed a-priori. Logical effort method can be used to decide sizing.

Second, the voltage across any oxide at any time should not be greater than the supply voltage, which ensures oxide reliability; most process design engineers will not guarantee oxide reliability for oxide voltages greater than the chip VDD. If a low voltage chip is tied to a bus which connects several chips, some with higher supply voltages, then the Input buffer must be designed such that there is no chance of a problem with the oxide.

The circuits of VLSI chips are designed to be tri-statable as shown in Figure 33.41, which is designed to be driven only when the output enable signal

is asserted. The circuit implementation requires 12 transistors. However in terms of silicon area, this implementation may require a relatively small area since the last stage transistors need not be sized large. 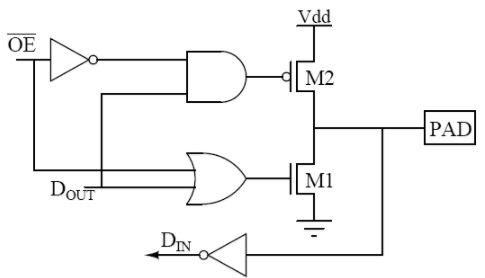 Large MOS transistors are susceptible to the latch-up effect. In the chip substrate, at the junctions of the p and n material, parasitic pnp and npn bipolar transistors are formed as in the following cross-sectional view shown in Figure 33.51 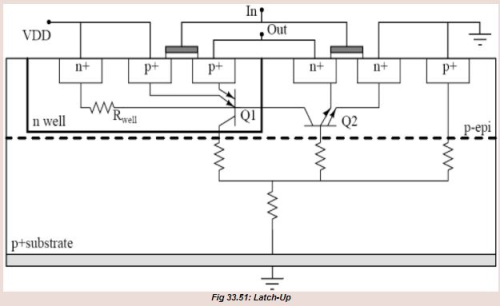 These bipolar transistors form a silicon-controlled rectifier (SRC) with positive feedback as in the following circuit model shown in Figure 33.52 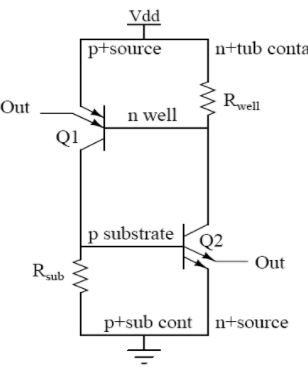 The final result of the latch-up is the formation of a short-circuit (a low impedance path) between VDD and GND which results in the destruction of the MOS transistor.

The following techniques can be used to prevent latch-up: