Ip (Internet Protocol)An internetwork is often referred to as a network of networks because it is made up of lots of smaller networks. The n odes that interconnect the networks are called routers. They are also sometimes called gateways, but since this term has several other connotations, we restrict our usage to router. The internet protocol is the key tool used today to build scalable, heterogeneous internetwork. 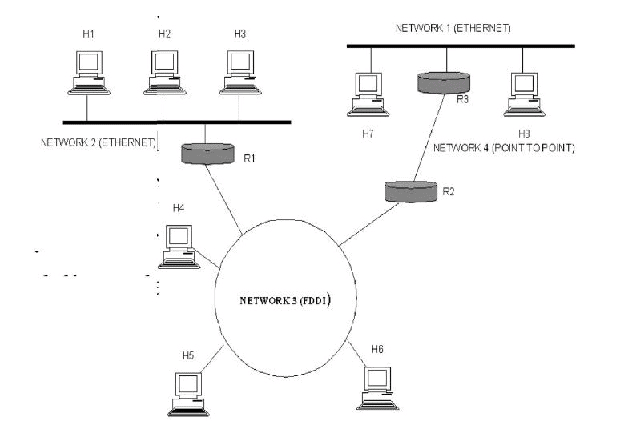 Service Model :|The main concern in defining a service model for an internetwork is that we can provide a host-to-host service only if this service can somehow be provided over each of the underlying physical networks. For Example, it would be no good deciding that our internetwork service model was going to pro vide guaranteed delivery of every packet in 1 m s or less if there were underlying network techno logies that could arbitrarily delay packets.The IP service model can be thought of as having two parts: an ad dressing scheme, which provides a way to identify all hosts in the internetwork, and a datagram (connectionless) model of data delivery. This service model is sometimes called best effort bec ause, although IP makes every effort to delivery da tagram, it makes no guarantees.Datagram Delivery:A datagram is a type of packe t that happens to be sent in a connectionles s manner over a network. Every datagram carries enough information to let network forward the packet to its correct destination; there is no need for any advance setup mechanism to tell the network what to do when the packet arrives. The network makes its best effort to get it to the desired destination. The best-effort part means that if something goes wrong and the packet gets lost, corrupted, misdelivered,or in any way fails to reach its intended destination, the network does nothing-it made its best effort, and that is all it had to do. It does not make any attempt to recover from the failure. This is sometimes called an unreliable service.Packet Format:The IP datagram, like most packets, consists of a header followed by a number of bytes of data.The Version field specifies the version of IP. The current version of IP is 4, and it is sometimes called IPv4^2.putting this field right at the start of the datagram makes it easy for everything else in the packet format to be redefined in subsequent versions; the header processing software starts off by looking at the version and then branches off to process the rest of the packet according to the appropriate format. 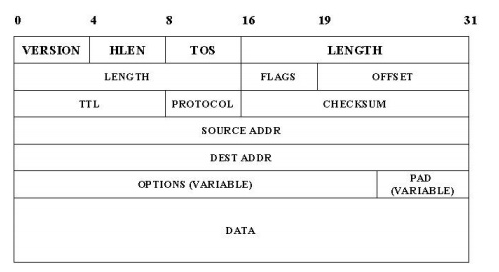 The next field, HLEN, specifies the length of the header in 32-bit words. When there are no options, which is most of the time, the header is 5 words (20 bytes) long. The 8_bit type of service (TOS) field has had a number of different definitions over the years, but its basic function is to allow packets to be treated differently based on application needs. For example, the TOS value might determine whether or not a packet should be placed in a special queue that receives low delay.

The next 16-bit of the header contain the Length of the datagram, including the header. Unlike the HLEN field, the Length field counts bytes rather than words. Thus, the maximum size of an IP datagram is 65,535 bytes. The physical network, over which IP is running, however, may not support such long packets. For this reason, IP supports a fragmentation and reassembly process, the second word of the header contains information about fragmentation. The next byte is the time to live (TTL) field. The intent of the field is to catch packets that have been going around in routing loops and discard them, rather than let them consume resources indefinitely.The Protocol field is simply a demultiplexing key that identifies the higher-level protocol to which this packet should be passed. These are values defined for TCP (6), UDP (17), and many other protocols that may sit above IP in the protocol graph.

The Checksum is calculated by considering the entire IP header as a sequence of 16-bit words, adding them up using ones complement arithmetic, and taking the ones complement of the result.The last two required fields in the header are the SourceAddr and the DestinationAddr for the packet. The latter is the key to datagram delivery: every packet contains a full address for its intended destination so that forwarding decisions can be made at each router. The source address is required tom allow recipients to decide if they want to accept the packet and to enable them to reply.Finally, there may be a number of options at the end of the header. The presence or absence of options may be determined by examining the header length (HLen) field. While options are used fairly rarely, a complete IP implementation must handle them all.Fragmentation and Reassembly:One of the problems of providing a uniform host-to-host service model over a heterogeneous collection of network is that each network technology tends to have its own idea of how large a packet can be. For example, an Ethernet can accept packets up to 1,500 bytes long, while FDDI packets may be 4,500 bytes long.This leaves two choices for the IP service model: make sure that all IP datagram are small enough to fit inside one packet on any network technology, or provide a means by which packets can be fragmented and reassembled when they are too big to go over a given network technology.

The latter turns out to be a good choice, especially when you consider the fact that new network technologies are always turning up, and IP needs to run over all of them; this would make it hard to pick a suitably small bound on datagram size.This also means that a host will not send needlessly small packets, which wastes bandwidth and consumes processing resources by acquiring more headers per byte of data sent. For example, two hosts connected to FDDI networks that are interconnected by a point-to-point link would not need to send packets small enough to fit on an Ethernet.

The central idea here is that every network type has a maximum transmission unit (MTU), which is the largest IP datagram that it can carry in a frame.The unfragmented packet has 1,400 bytes of data and a 20-byte IP header. When the packet arrives at the R2, which has an MTU of 532 bytes, it has to be fragmented. A 532-byte MTU leaves 512 bytes for data after the 20-byte IP header , so the first fragment contains 512 bytes of data. The router sets the M bit in the Flags field, meaning that there are more fragments to follow, and it sets the offset to 0,since this fragmented contains the first part of the original datagram.

The data carried in the second fragment starts with the 513th byte of the original data, so the Offset field in this header is set to 64,which is 512/8. Why the division by 8? Because the designers of IP decided that fragmentation should always happen on 8-byte boundaries, which means that the Offset field counts 8-byte chunks, not bytes. The third fragment contains the last 376 bytes of data, and the offset is now 2*512/8=128.since this is the last fragment, the M bit is not set. 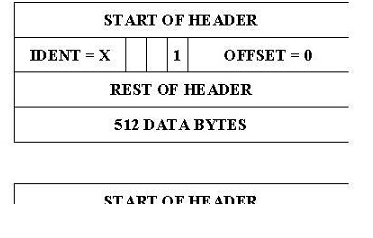 Global Adressess:Global uniqueness is the first property that should be provided in an addressing scheme. Ethernet addresses are globally unique but not sufficient to address entire network. And also they are flat that is no structure in addressing.IP addresses are hierarchical. They made up of two parts, they are a network part and a host part. There are approximately 4 billion possible IP addresses, one half for class A, one quarter for class B and one-eighth for class C address. There are also class D and class E are there. But class D for multicast and class E are currently unused.IP addresses are written as four decimal integers separated vy dots. Each integer represents the decimal value contained in 1 byte of the address, starting at the most significant.Datagram Forwarding In IpA datagram is sent from a source to a destination, possibly passing through several routers along the way. Any node, whether it is a host or a router, first tries to establish whether it is connected to the same network as the destination. It compares the network part of the destination address with its network part. If match occurs, then it directly deliver the packet over the network. Else, then it sends to a router. Among several routers, the nearest one will be selected. If none of the entries in the table match the destination‟s network number it forwards to the default router.Datagram forwarding algorithm is,If (networknum of destination = networknum of one of my interface) then Deliver packet to destination over that interfaceElseIf (networknum of destination is in my forwarding table) then Deliver packet to nexthop routerElseDeliver packet to default router 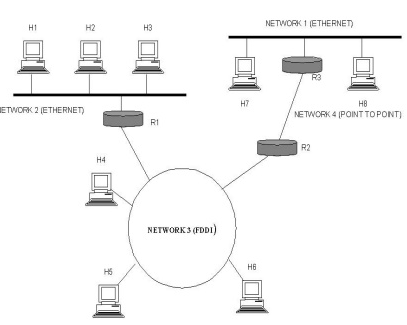 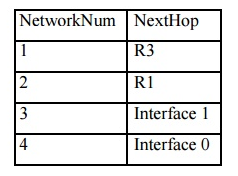