In the gaseous state, the molecules are farthest apart as compared to solid and liquid states and the intermolecular forces are negligible so the particles move randomly.

A given substance may occur in solid, liquid or gaseous phase depending upon the relative value of two tendencies namely Mutual Attraction (MA) and Escaping Tendency (ET)

Out of the three states of matter, the most simplest one is the gaseous state.

Gases show maximum equality in their behavior irrespective of their nature.

The gases possess mass. The mass of gas is generally used in the of form of number of moles which is related as

Volume of gas is nothing but volume of the container in which it is present.

Relation between different units of volume

Note: Mass, volume and number of moles are extensive properties that depend on mass hence then all divertly additive

Note:  Density, Pressure and Temperature are intensive properties they does not depend on mass hence they are non-additive in nature. 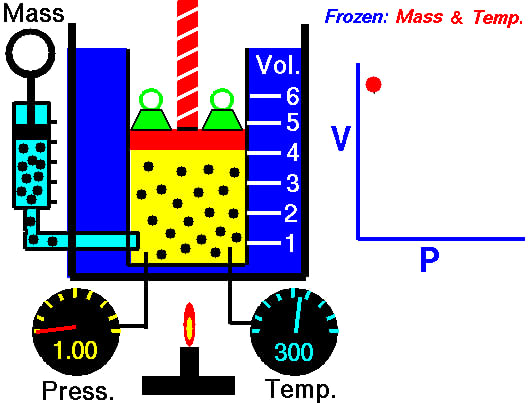 (when temperature and number of moles are kept constant)

The proportionality can be changed into an equality by introducing a constant k, i.e.,

Boyle’s law can be verified by any one of the following three ways graphically.

Alternatively, Boyle’s law can also be stated as follows:

“Temperature remaining constant, the product of pressure and volume of a given mass of a gas is constant”. The value of the constant depends upon the amount of a gas and the temperature.

Mathematically, it can be written, as,

Location of straight line and curve change with temperature in the isotherm shown in the following figure.

According to Boyle’s law, PV = Constant at constant temperature

It relates the volume and  temperature of a gives mass of gas at constant pressure.

For each degree change of temperature, the volume of a sample changes by the fraction 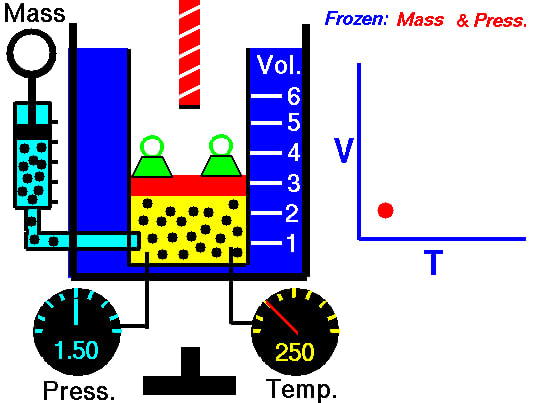 Let the volume of a given amount of gas be V0 at 0°C. The temperature is increased by t°C and the new volume becomes Vt

A new temperature scale was introduced known as Kelvin scale or absolute scale (named after the British physicist and mathematician Lord Kelvin). The lower limit of the scale is called absolute zero which corresponds to –273°C.

At absolute zero or –273°C, all molecular motions would stop and the volume of the gas would become zero. The temperature in absolute scale is always obtained by adding 273 to the temperature expressed in °C.

This new temperature scale may be used for deducing Charles’ law.

Alternatively, Charles’ law can be stated as follows:

“The volume of a given amount of a gas at constant pressure varies directly as its absolute temperature”.

(if pressure is kept constant)

It relates the pressure and absolute temperature of a given mass of a gas at constant volume. 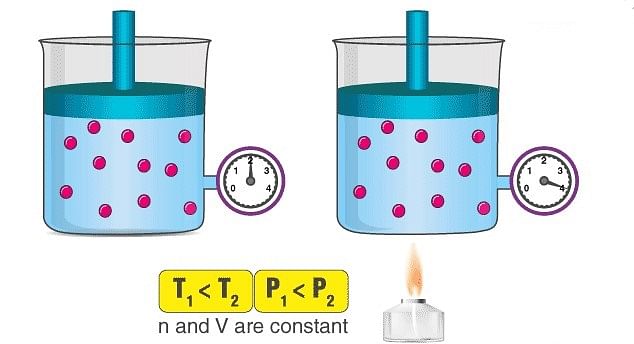 An illustration describing the increase in pressure that accompanies an increase in the absolute temperature of a gas kept at a constant volume is provided above. Volumes remaining constant, the pressure of given mass of a gas increases or decreases by

of its pressure at 0°C per degree change of temperature.

(if volume and number of moles are kept constant)

At constant volume, the pressure of a given amount of a gas is directly proportional to its absolute temperature.

(i)  For Solid, liquid and gas

In 1812, Amadeo Avogadro stated that samples of different gases which contain the same number of molecules (any complexity, size, shape) occupy the same volume at the same temperature and pressure. It follows from Avogadro’s hypothesis that  v  ∝ n (T and P are constant)

Combining all these gas laws, a simple equation can be derived at, which related P, V, n and T for a gas 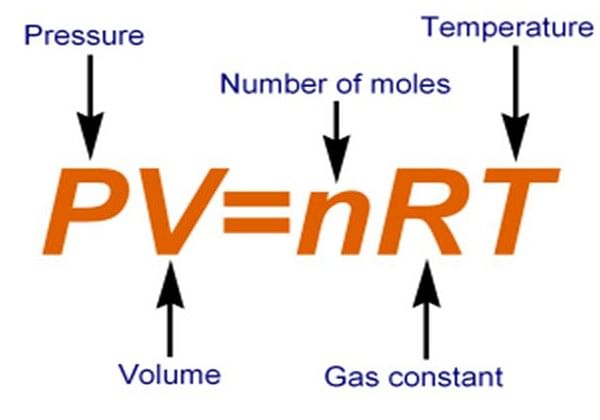 P is the pressure of the gas and can be expressed in atm of Pa. Correspondingly, the volume must be expressed in litres or m3 respectively. n is the number of moles and T is the temperature in Kelvin. R is called the universal gas constant.

Vapour density of a gas is same at any temperature, pressure and volume.

The total pressure of a mixture of non-reacting gases is equal to the sum of their partial pressures.

By the partial pressure of a gas in a mixture is meant, the pressure that the gas will exert if it occupies alone the total volume of the mixture at the same temperature. 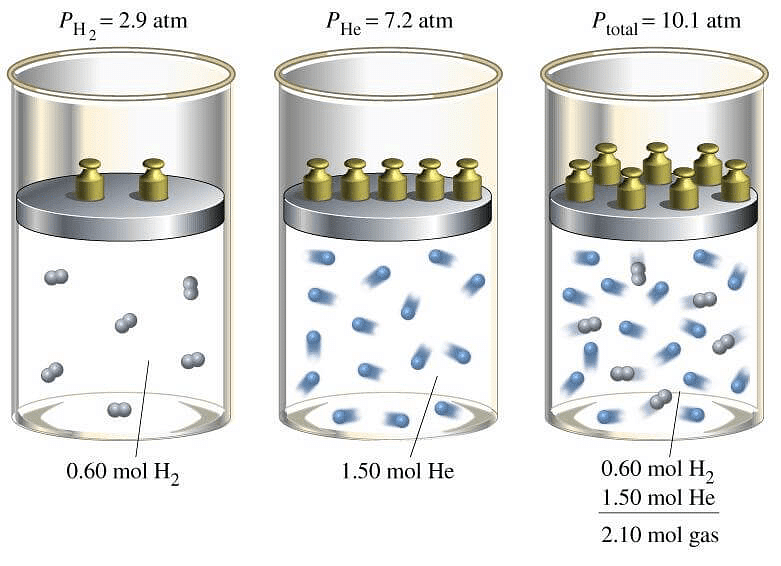 Assumption: Volume of all the gases is same as they are kept in same container.

Relationship between Partial Pressure and Number of Moles

(ii) Partial pressure of gas in the mixture =

Dalton’s law is used to calculate the pressure of a dry gas when it is collected over water at atmospheric pressure.

Diffusion is the tendency of any substance to spread throughout the space available to it. Diffusion will take place in all direction and even against gravity.

The steaming of gas molecules through a small hole is called effusion.

According to Graham, the rate of diffusion (or effusion) of a gas at constant pressure and temperature is inversely proportional to the square root of its molecular mass.

, at constant P and T

at constant P and T

at constant P and T

at constant T only.

Therefore, according to Graham’s law of diffusion (effusion) at constant P and T.

d1 and d2 are the respective densities and V1 and V2 are volumes diffused (effused) in time t1 and t2.

Where x1 and x2 are distances travelled by molecules in a narrow tube in time t1 and t2.