Until recently, the thought that there might ever be a cure for aging seemed preposterous. Growing older and more decrepit appeared to be an inevitable and necessary part of being human. Over the last decade, however, scientists have begun to see aging differently. Some now believe that the average life expectancy may soon be pushed up to 160 years; others think that it may be extended to 200 or 300 years. A handful even wonder whether we might one day live for a millennium or more.Behind this new excitement is the theory that the primary cause of aging lies in highly reactive molecules called free radicals, left behind by the oxygen we breathe. Free radicals react with the molecules in our bodies, damaging DNA, proteins, and other cell tissues, and are known to be implicated in diseases as diverse as cataracts, cancer, and Alzheimer's. The body does its best to protect itself against free radicals by producing its own chemicals to prevent aging, such as vitamins E and C, but it is always fighting a losing battle.A year ago Gordon Lithgow of the University of Manchester discovered a way to help combat free radicals. Using one of these anti-aging chemicals. he managed to increase the lifespan of one species of earthworm by 50 percent. Despite cautionary words from the scientists, many welcomed this as the first step towards a drug that would extend life. Research involving the mutation of genes has also thrown up fascinating results: after identifying two of the genes that appear to control how long the earthworm lives, similar genes were found in organisms as various as fruit-flies, mice, and human beings. When one considers the vast evolutionary distances that separate these species, it suggests that we may have discovered a key to how aging is regulated throughout the entire animal kingdom.In June last year, a small American company called Eukarion sought permission to carry out the first trials of an anti-aging drug, SCS, on human beings. Although it will initially be used to treat diseases associated with old age, Eukarion said, that 'if the effect of treating diseases of old age is to extend life, everyone's going to be happy.'Some scientists, however, are quick to discourage extravagant speculation. 'There is no evidence whatsoever that swallowing any chemical would have an effect on mammals', says Rich Miller of the University of Michigan. 'And those people who claim it might need to go out and do some experimenting'. Some research, moreover, has produced alarming results. As well as controlling aging, these, genes also partly control the hormones which regulate growth. The upshot of this is that although the lives of mutant mice can be extended by up to 80 percent, they remain smaller than normal.Quite apart from these sorts of horrors, the ethical implications of extending the human lifespan are likely to worry many people. Even if the falling birth rates reported in the world's developed nations were to be repeated throughout the world, would this be sufficient to compensate for massively extended life expectancy, and would we be willing to see the demographic balance of our society change out of all recognition? David Gems, the head of the Centre for Research into Ageing at University College, London, is enthusiastic about the opportunities opened up by extended life, but even he observes, 'If people live much longer, the proportion of children would. of course, be very small. It strikes me that it might feel rather claustrophobic: all those middle-aged people and very few children or young people.'The philosopher John Polkinghorne emphasizes that any discussion of the merits of life-extending therapies must take into account the quality of the life that is lived: 'One would not wish to prolong life beyond the point it had ceased to be creative and fulfilling and meaningful,' he says. 'Presumably, there would have to come to a point at which life ceased to be creative and became just repetition. Clearly, there are only so many rounds of golf one would want to play.'But Polkinghorne, a member of the Human Genetics Commission, also observes that so far our experience of extended life-expectancy has not resulted in world-weariness. Throughout the last century, life expectancy rose consistently, thanks to improved diet, better hygiene, continuous medical innovation, and the provision of free or subsidized healthcare. In 1952 the Queen sent out 225 telegrams to people on their 100th birthday; in 1996 she sent out 5218. 'Consider also, the lives of our Roman and Anglo-Saxon ancestors' he says. By and large, the doubling of human lifespan we have seen since then has not been a bad thing. Life has not become frustrating and boring. For example, we now live to see our children's children, and this is good.'Questions 1-5: Do the following statements agree with the information given in the Reading Passage? Answer Yes, No or Not given. Note:Yes: if the statement agrees with the claims of the writerNo: if the statement contradicts the claims of the writerNot given: if it is impossible to say what the writer thinks about this

Q.1. Scientific predictions about how much it will be possible to lengthen human life vary greatly._______Q.2. Research into extending life involves both new drugs and changes to genes. _______Q.3. Scientific experiments have not succeeded in making any animals live longer. _______Q.4. Most people in the future will decide not to have children. _______Q.5. Life expectancy has improved partly because people eat better. _______

Questions 6-9: Look at the following names of people or organisations and the list of opinions (A-F). Match each name with the opinion which the person or organisation expressed. Note: There are more opinions than names, so you will not use them all. 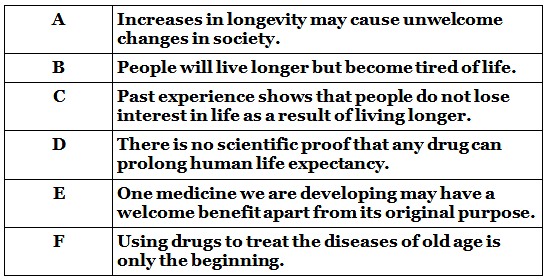 Question 10: Which TWO of the following are characteristics of free radicals? Choose TWO letters from A-E.

Questions 11-14: Complete the following summary of the scientific progress towards extending life expectancy. Choose your answers from the below list.

In one experiment using anti-aging chemicals, the life of (11) _______ was extended by half. (12) _______ like the ones which control the aging process in these animals have also been found in other species. Unfortunately, however, experiments on (13) _______ have been less successful: while they live longer, the (14) _______ controlling their growth are also affected with the result that they grow less.

Scientific predictions about how much it will be possible to lengthen human life vary greatly. - Yes

Research into extending life involves both new drugs and changes to genes. - Yes

Scientific experiments have not succeeded in making any animals live longer. - No

Most people in the future will decide not to have children. - Not Given

(A, D)A - They are a partial cause of certain diseases.D -  They harm our body chemistry.

In one experiment using anti-aging chemicals, the life of (11) (earthworms) was extended by half. (12) (Genes) like the ones which control the aging process in these animals have also been found in other species. Unfortunately, however, experiments on (13) (mice) have been less successful: while they live longer, the (14) (hormones) controlling their growth are also affected with the result that they grow less.