Averages can be defined as the central value in a set of data. 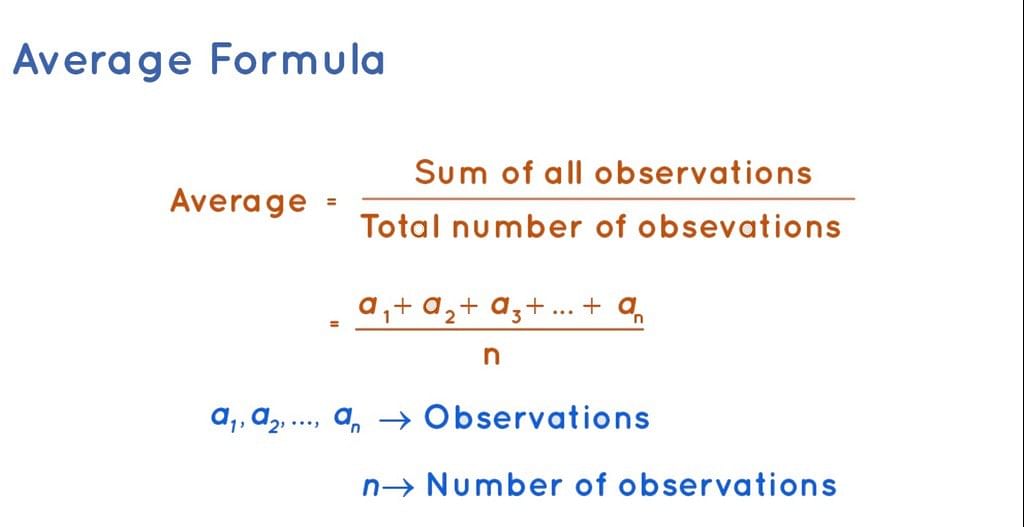 What is the average of the first five consecutive odd numbers?

Here, the number of data or observations is 5 and the sum of these 5 numbers is 25.

Some Basic Formulae to Remember:

Questions based on averages can be easily solved using shortcuts. By using shortcuts, any question can be solved quickly and efficiently which can save a lot of time.

1. To find average or change in average

The average of a batsman in 16 innings is 36. In the next innings, he is scoring 70 runs. What will be his new average?

The average mark of 19 children in a particular school is 50. When a new student with marks 75 joins the class, what will be the new average of the class?

2. Another example where the average dips:

3. To find new value when the average is given:

Using the shortcut, based on the same method used previously:

Method of Deviation to Find the Average

The concept of an assumed mean is not new. It is widely used to reduce the calculation in finding the average in statistics where the data is huge.

Here, We will demonstrate the application of the assumed mean to solve some aptitude questions based on averages and weighted averages.

Let us take an example to understand the concept

Applying the standard approach, the total age of the 30 students =

years. When the class teacher is included, the new total age of the class =

To understand the deviation method, let us simulate the problem. In the case of average age, assume that each student has 12 chocolates with them.

Let us take one more example:

The Concept of Weighted Mean/Average

Total weight of the group of boys =

and for the group of girls, the total weight =

Therefore, the average height of the class =

Assume that each boy and each girl is carrying 150 and 140 chocolates respectively.

Question for Important Formula & Tips: Averages
Try yourself:Suppose that a marketing firm conducts a survey of 1,000 households to determine the average number of TVs each household owns. The data show a large number of households with two or three TVs and a smaller number with one or four. Every household in the sample has at least one TV and no household has more than four. Find the mean number of TVs per household.

As many of the values in this data set are repeated multiple times, you can easily compute the sample mean as a weighted mean. Follow these steps to calculate the weighted arithmetic mean:

Step 1: Assign a weight to each value in the dataset:

Step 2: Compute the numerator of the weighted mean formula.

Multiply each sample by its weight and then add the products together:

Step 3: Now, compute the denominator of the weighted mean formula by adding the weights together.

Step 4: Divide the numerator by the denominator

The mean number of TVs per household in this sample is 2.566

e) None of these

To maximize the number of players who scored 18 and above number of goals, one should assume that only one person has scored 20. To counter him, there will be one person who will score 12 goals.

One more person is included and the weight = 48 kg