Q1. Define nationalism?Ans. The feeling of oneness and unity among the people of a nation or patriotic feeling, principles and policy of national independence is termed as nationalism.

The dissatisfaction with British rule intensified in the 1870s and 1880s. They posted various laws which upset the people of India.1. The Arms Act was passed in 1878, disallowing Indian from possessing arms.2. In the same year the Vernacular Press Act was also enacted in an effort to silence those who were critical of the government. The Act allowed government to confiscate the assets of newspapers published anything that was found “objectionable”.3. In 1883, there was a furore over the attempt by the government to introduce the Ilbert Bill. The bill provided for the trial of British or European persons by Indians, and sought equality between British and Indian judges in the country. But when white opposition forced the government to withdraw the bill, Indians were enraged.

The event highlighted the racial attitudes of the British in India. 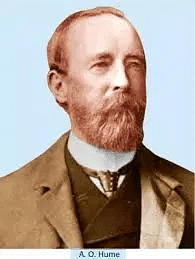 A. O. HumeQ6. Why were the early years of the Indian National Congress referred to as the moderate phase? Ans.

Q7. What were the economic issues that were raised by the Indian National Congress in its moderate phase?Ans.

Q8. Why was Bengal partitioned?Ans.

Q9. What was the result of the partition of Bengal?Ans. The portion of Bengal infuriated people all over India:

Q10. What do you understand by the term – ‘Swadeshi Movement’?Ans. The word ‘Swadeshi’ comes from twp words – ‘ swa’ and ‘desh’ which means ones own country.

Q11. Who were the revolutionaries?Ans. The revolutionaries were a small group of people who suggested that the use of violence to make a radical change within the society would be necessary to overthrow British rule.

Q12. When was the Muslim league formed and what were its demands?Ans. A groups of Muslim landlords and Nawabs formed the All India Muslim league at Dacca in 1906.The league supported the partition of Bengal.* It desired separate electorates for Muslims, a demand conceded by the government in 1906. Some seats in the councils were now reserved for Muslims who would be elected by Muslims voters.

Q13. How did the Ist World War affect the economical condition of India?Ans.

Q14. What was Rowlatt Act?Ans. Rowlatt Act was introduced by the British in 1919.According to this act, any Indian could be arrested without trial in the court of law. The act curbed fundamental rights such as the freedom of expression and strengthened police powers.

Q15. Why did the nationalist leader oppose Rowlett Act?Ans. Mahatma Gandhi, Mohanmad Ali Jinnah and others felt that the government had no right to restrict people’s basic freedoms.They criticized the Act as “devilish” and tyrannical

Q16. What were the effects of the Jallianwala Bagh massacre?Ans. On learning about the massacre, Rabindranah Tagore expressed the pain and anger of the country be renouncing his knighthood.

During the Rowlatt Satyagraha the participants tried to ensure that Hindus and Muslims were united in the fight against British rule.

Q19. What were the methods adopted in the Non – cooperation Movement?Ans.

Q22. Why did Mahatma Gandhi organize a ‘dandi march’?Ans. Purna Swaraj would never come on its own. It had to be fought for. In 1930, Gandhi declared that he would lead a march to break the salt law.

According to this law, the state had a monopoly on the manufacture and sale of salt. Gandhi along with other nationalists reasoned that it was sinful to tax salt since it is such an essential item of our food. The salt March related the general desire of freedom to a specific grievance shared by everybody, and thus did not divide the rich and the poor.

Q23. How did the British expand its army during the War period?Ans. People in village were pressurized to supply soldiers for an alien cause. A large number of soldiers were sent overseas.Many returned after the war with an understanding of the ways in which imperialist powers were exploiting the people in Asia and Africa with a desire to oppose colonial rule in India.

Q24. Who was Mahatma Gandhi?Ans. Gandhiji, aged 46, arrived in India in 1915 from south Africa. Having led Indian in the country in non – violent marches against racist restrictions, he was already a respected leader, known internationally. His south Africa campaigns had brought him in contact with various types of Indians: Hindus, Muslims, Paris and Christians, Gujaratis, Tamil and North – Indians and upper –class merchants, lawyers and workers. Mahatma Gandhi spent his first year in India traveling throughout the country, understanding the people, their needs and the overall situation.

Q25. Discuss the people’s response about the Non –Cooperation Movement in different parts of the country.Ans.

Peasants, tribals and women participated in large number.  The British response towards this movement was – the government tried to crush the movement through brutal action against peaceful satyagrahis. Thousands were sent to jail.

Q27. What was the most important feature of the government of India act of 1935 introduced by British?Ans.

Government of India Act of 1935 prescribed provincial autonomy and the government announced elections to the provincial legislatures in 1937. Congress formed governments in 7 out of 11 provinces.

Q28. What was the Congress demand after having won the elections?Ans.

Q30. How did the British try to control the Quit India Movement?Ans.

Q31. What were the demands of the Muslim league in 1946?Ans. Meanwhite, in 1940 the Muslim league had moved a resolution demanding “Independent states” for Muslims in the north –western and eastern areas of the country.

Q32. Why is the Indian National Congress (1919 – 1947) referred to as Gandhian Era?Ans. From 1919 onwards Gandhi played a Major role in Indian National Movement as launched 3 great mass movements such as Non – cooperation Movement, Civil Disobedience Movement, Quit India Movement. Ultimately it was Gandhi who led the people of India towards independence in the year 1947.

Q33. Write a short note on Jallianwala Bagh?Ans. The Jallianwala Bagh atrocities inflicted by General Dyer in Ameritsar on Baisakhi Day (13 April), were a part of Rowlett Act repression. On  learning about the massacre, Rabindranath Tagore expressed the pain and anger of the country be renouncing his knight hood. During the Rowlate  Satyagraha the participants tried to ensure that Hindus and Muslims were in the fight against the British rule.