Income elasticity of demand is the degree of responsiveness of quantity demanded of a good to changes in the income of consumers. In symbolic form,

This can be given mathematically as follows:

(e) The income of a household rises by 5%, the demand for buttons does not change at all.

we will find income-elasticity for various goods. The results are as follows:

It is to be noted that the words ‘luxury’, ‘necessity’, ‘inferior good’ do not signify the strict dictionary meanings here. In economic theory, we distinguish them in the manner shown above. Knowledge of income elasticity of demand is very useful for a business firm in estimating future demand for its products. Knowledge of income elasticity of demand helps firms predict the outcome of a business cycle on its market demand. This enables the firm to carry out appropriate production planning and management.

Cross Elasticity of Demand Price of Related Goods and Demand: The demand for a particular commodity may change due to changes in the prices of related goods. These related goods may be either complementary goods or substitute goods. This type of relationship is studied under ‘Cross Demand’. Cross demand refers to the quantities of a commodity or service which will be purchased with reference to changes in price, not of that particular commodity, but of other inter-related commodities, other things remaining the same. It may be dened as the quantities of a commodity that consumers buy per unit of time, at dierent prices of a ‘related article’, ‘other things remaining the same’. The assumption ‘other things remaining the same’ means that the income of the consumer and also the price of the commodity in question will remain constant.Substitute Products In the case of substitute commodities, the cross demand curve slopes upwards (i.e. positively) showing that more quantities of a commodity, will be demanded whenever there is a rise in the price of a substitute commodity. In figure 9, the quantity demanded of tea is given on the X axis. Y axis represents the price of coffee which is a substitute for tea. When the price of coffee increases, due to the operation of the law of demand, the demand for coffee falls. The consumers will substitute tea in the place of coffee. The price of tea is assumed to be constant. Therefore, whenever there is an increase in the price of one commodity, the demand for the substitute commodity will increase. 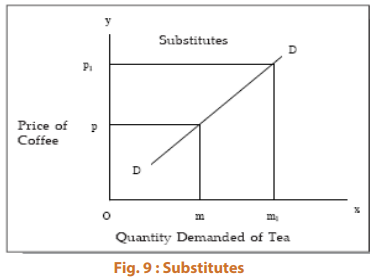 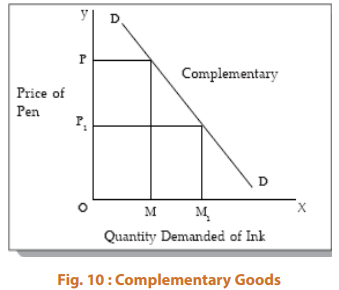 A change in the demand for one good in response to a change in the price of another good represents cross elasticity of demand of the former good for the latter good. Here, we consider the effect of changes in relative prices within a market on the pattern of demand.Symbolically, (mathematically)

The elasticity of demand of tea is +1.5 showing that the demand of tea is highly elastic with respect to coffee. The positive sign shows that tea and coffe are substitute goods.Illustration 2:- The price of 1 kg of sugar is ₹ 50. At this price 10 kg is demanded. If the price of tea falls from ₹ 30 to ₹ 25 per kg, the consumption of sugar rises from 10 kg to 12 kg. Find out the cross price elasticity and comment on its value.Solution :- Cross elasticity