Example 35.2Determine bar forces in the 3-panel truss of the previous example (shown in Fig. 35.2a) assuming that the diagonals can carry only tensile forces.

Solution:In this case, the load carried by the compressive diagonal member is zero. Hence the panel shear is completely resisted by the tension diagonal. Reactions of the truss are the same as in the previous example and is given by,

Consider again the equilibrium of free body diagram of the truss shown left of A − A. This is shown in Fig. 35.3a. 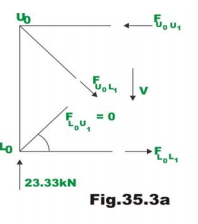 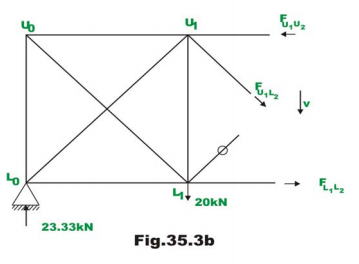 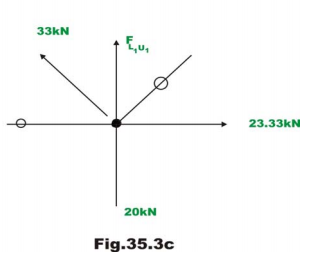 It is easily seen that,

Considering the vertical equilibrium of joint L0, we ge

Since diagonals are inclined at 45° to the horizontal, the vertical and horizontal components of forces are equal in any panel.

In this panel, the shear is 3.33 kN. Considering the vertical equilibrium of the free body diagram,

Taking moment of all forces about U1,

Considering the equilibrium of right side of the section B − B (ref. Fig. 35.3d) the forces in the 3rd panel are evaluated. 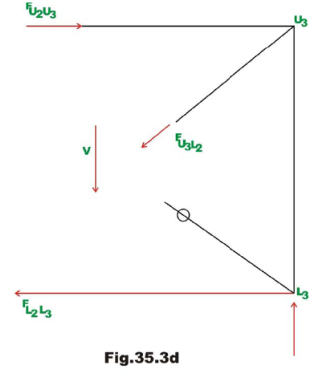 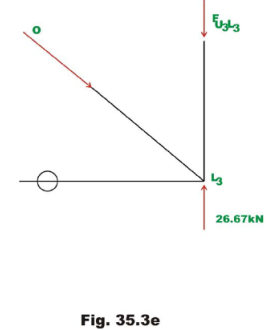 The complete solution is shown in Fig. 35.3f. Also in the diagram, bar forces obtained by exact method are shown in brackets. 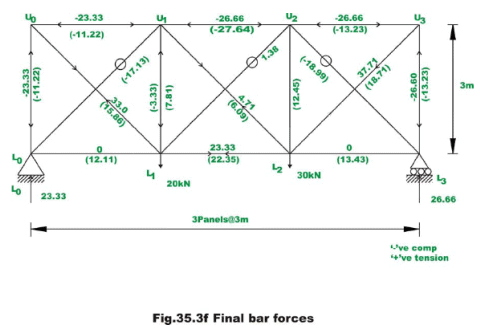 Common types of industrial frames are shown in Fig. 35.4a and 35.4b. They consist of two columns and a truss placed over the columns. They may be subjected to vertical loads and wind loads (horizontal loads). While analyzing for the gravity loads, it is assumed that the truss is simply supported on columns. However, while analyzing the frame for horizontal loads it is assumed that, the truss is rigidly connected to columns. The base of the column are either hinged or fixed depending on the column foundation. When the concrete footing at the column base is small, then it is reasonable to assume that the columns are hinged at the base. However if the column are built into massive foundation, then the column ends are considered as fixed for the analysis purposes. 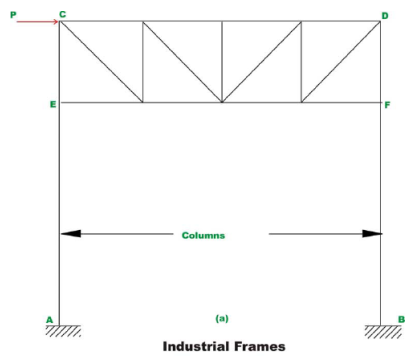 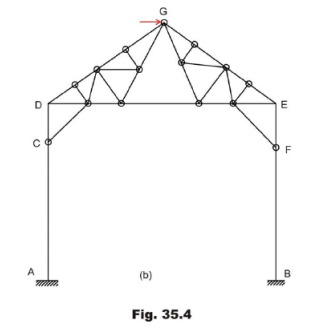 Before considering the analysis of structures to wind load (horizontal load) consider the portals which are also used as the end portals of bridge structure (see Fig. 35.5). Their behaviour is similar to industrial trusses. The portals are also assumed to be fixed or hinged at the base depending on the type of foundation. 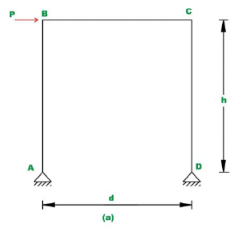 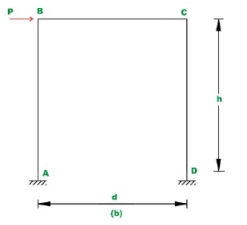 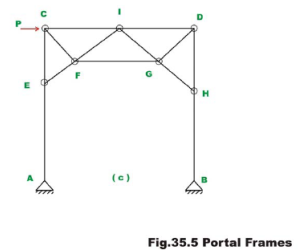 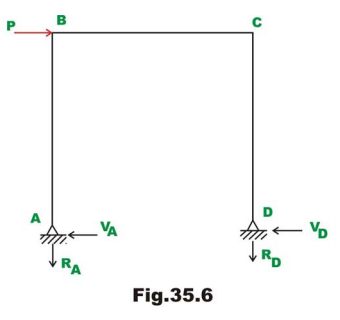 Reactions and Bending moments:As per the assumption, shear at the base of columns is given by (vide Fig. 35.6)

The bending moment diagram is shown in Fig. 35.7. 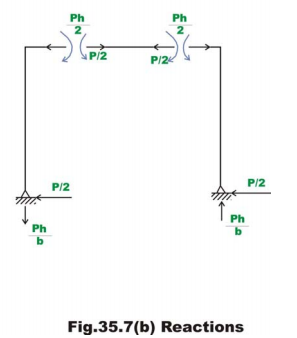 Now consider a portal frame which is fixed at the base as shown in Fig. 35.5b. This is statically indeterminate to third degree and one needs to make three independent assumptions to solve this problem by equations of static equilibrium alone. Again it is assumed that the shear at the base of each column is equal provided their stiffnesses are equal. The deformed shape of the portal is shown in Fig. 35.8a and the deformed shape of the industrial frame is shown in Fig.35.8b. 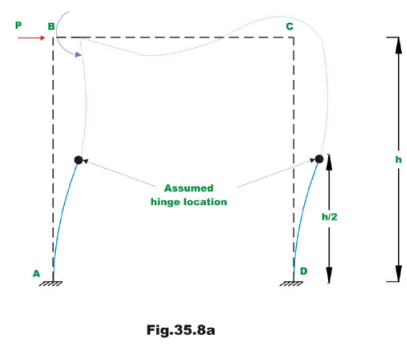 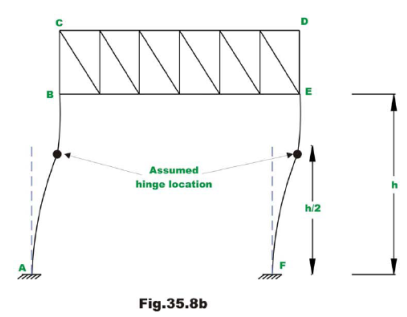 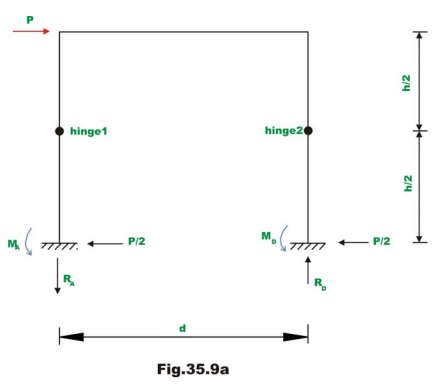 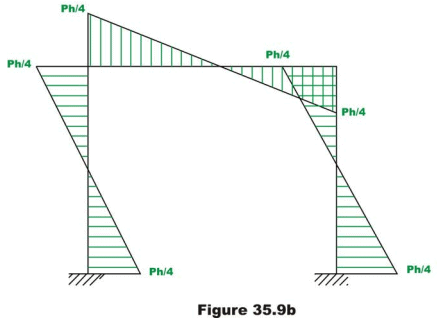 Taking moment of all forces left of hinge 1 about hinge 1 (vide Fig. 35.9a),yields

Similarly taking moment of all forces left of hinge 2 about hinge 2,

Taking moment of all forces right of hinge 1 about hinge 1 gives,

The bending moment diagram is shown in Fig. 35.9b.

Example 35.3Determine approximately forces in the member of a truss portal shown in Fig. 35.10a. 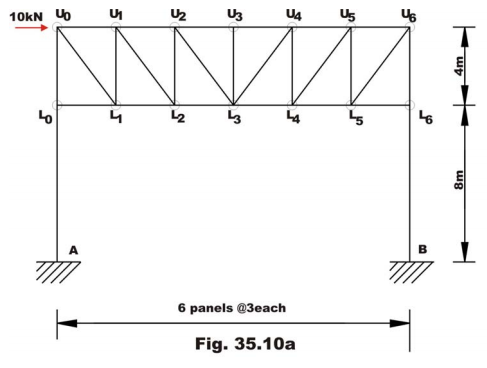 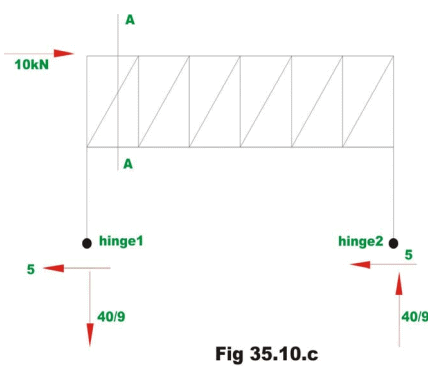 Taking moment of all forces right of hinge 2 about hinge 2, results

Taking moment of all forces right of hinge 1 about hinge 1 gives,

Forces in the truss member can be calculated either by method of sections or by method of joints. For example, consider the equilibrium of truss left of A − Aas shown in Fig. 35.10d. 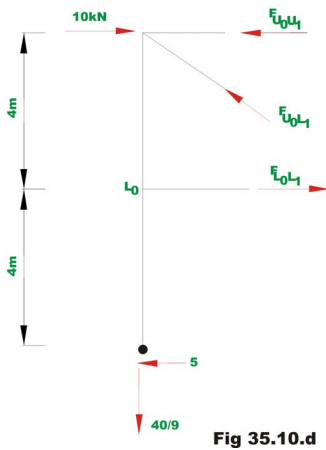 Taking moment about , U0,