i. Projects under Coastal Berth Scheme will be executed in total eight states.With 12 projects, Maharashtra is the state having highest number of projects under this scheme.

ii. 10 projects will be executed in Andhra Pradesh & Goa, 6 projects in Karnataka, 3 projects in Kerala and Tamil Nadu, 2 projects in Gujarat and 1 in West Bengal… 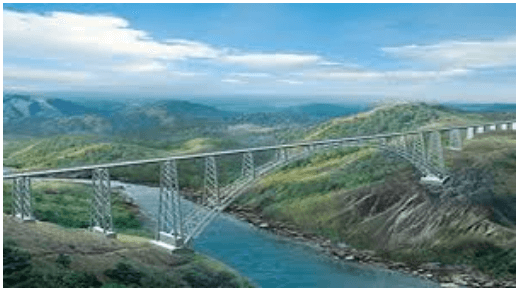 i. The bridge will stand 359 metres above the bed of the River Chenab and will be 30 metres higher than the Eiffel Tower in Paris.

ii. The bridge forms link in the 111-km distance between Katra and Banihal which is part of the Udhampur-Srinagar-Baramulla section of the Kashmir Railway project.

♦ Major river of India and Pakistan
♦ Forms in the upper Himalayas and flows through the Jammu region into the plains of the Punjab, Pakistan

i. As per the order, the biometric attendance system would be first implemented in the offices of all divisions, zones, Metro Rail Kolkata, railways workshop, factories and production units by 30th November 2017.

ii. In the second phase, it will be implemented in all the offices of Railways, including public undertakings, attached and subordinate offices by 31st January 2018.  Currently, the system is in practice in the railway board and few zonal headquarters.

iii. It will be monitored by the divisional railway manager’s office. CCTV cameras will be provided with the biometric machine.

i. Biryani dish is believed to be of Persian origin. In South India, several Persian and Turkish dishes were introduced by Qutub Shahis and Biryani was one such dish. However, the famous Hyderabadi Biryani does have a lot of local spices.

ii. Bagare baingan (Brinjal recipe) has long been a signature dish of royal kitchens of Hyderabad. This dish is believed to have indigenous origin as brinjal is a native Indian plant.

iii. Seviyan is a dessert/sweet dish which is a part of Id-ul-Fitr celebrations. This dish too was introduced into Deccan by the Qutub Shahis.

iv. Postage stamps on these dishes is part of Department of Post’s initiative to issue stamps on 24 different Indian dishes, including the famous Tirupati laddu.

i. This event was organised by Defence Institute of Physiology and Allied Science (DIPAS) of Defence Research and Development Organisation (DRDO).

ii. The conference was held with an objective to update the scientific community about most latest advances in human Physiology in extreme environments, Sport Physiology, Yoga, Neuroscience, and translational research.  16 sessions and 118 lectures were conducted on these subjects.

ii. These painting have been made by the students from top Fine Art Colleges in Delhi. The paintings were selected through competition conducted by the Embassy of Sweden.

iii. The jury of the competition included Kaveree Bamzai , the Editor of India Today Group, Artist Naresh Kapuria and Josa Karre, the Head of Economic section at the Embassy of Sweden.

iv. Objective of exhibiting this wall is to spread awareness about all the Nobel Laureates from India and their contribution to the society.

ii. 20 officers each from both the sides will participate in CPX, whereas one infantry company from both the armies will take part in FTX.

ii. Exercise ‘SAMPRITI’ is held alternately in India and Bangladesh every year.

iii. Objective of this exercise is to enhance interoperability between army personnel of India and Bangladesh while carrying out joint counter-insurgency or counter-terrorism operations.
iv. Previous edition of ‘SAMPRITI’ was held at Tangail in Dhaka, Bangladesh in 2016