i. 1,400 representatives from 110 countries, and 2000 delegates from India participated in the Organic World Congress – 2017. The goal is to move from organic India to the organic world.

ii. The Organic World Congress (OWC) is organized once every three years in a different country. The International Federation of Organic Farming Movements (IFOAM) and Organic Farming Association of India (OFAI) are organizing the event.

iii. One of the highlights of the event is the exhibition of carefully preserved diverse indigenous seed varieties over generations. 55 seeds group from 15 Indian states showcase 4,000 varieties of seeds in the event.

ii. The Nordic-Baltic countries are Denmark, Estonia, Finland, Iceland, Latvia, Lithuania, Norway and Sweden. They are tied together geographically and historically through trade, culture and many other value systems.

iii. The festival would offer a diverse mix of some of the most celebrated and Oscar nominated movies from the Nordic-Baltic region. Movies would range from action movies to family films to documentaries. 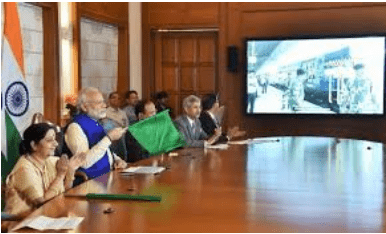 ii. It is a fully air-conditioned passenger train and will run every Thursday from both Kolkata and Khulna.

iii. ’Bandhan Express’ will cover 172 kms distance between Kolkata and Khulna in four hours. It will have two stoppages, one at Petrapole (on the India side) and other at Benapole (in Bangladesh).

iv. It is the second Indo-Bangla train service after the Maitree Express, which runs between Dhaka and Kolkata.

i. This agreement, referred to as ‘Establishment of Friendship City Relationship’ was signed between Park Won Soon, Mayor of Seoul (South Korea) Metropolitan Government and Delhi and Chief Minister Arvind Kejriwal.

iii. The twin city agreement between Delhi and Seoul will come into effect after being approved by Union Government.

iv. It is to be noted that Arvind Kejriwal and Park Won Soon, both received Ramon Magsaysay Award in year 2006.