i. It is a part of NITI Aayog’s plan on ‘National Strategy for Artificial Intelligence’.

Key Points:
i. In the collaboration:

About ICTAI:
i. It would conduct advanced research to produce AI-led solutions in three important areas – healthcare, agriculture and smart mobility.
ii. It would work on the following domains of ICTAI:
Governance, fundamental research, physical infrastructure, compute and service infrastructure needs, and talent acquisition.
iii. This would in turn help in building policies and standards related to information technology such as data-storage, information security, privacy, and ethics for data capture and use.
iv. Another key area of focus is collaboration with industries and startups to produce more AI based technologies and increase skilled talent.
v. The learning and best practices developed through this model ICTAI will be used by NITI Aayog to set up the future ICTAIs across country.

Objective:
To enable Corporates and PSUs to contribute to upgradation through Corporate Social Responsibility funds.

Key Points:
i. This has been made for the Indian Railway stations for upgrading its infrastructure, technology, hygiene among other things.
ii. Corporates and PSUs willing to contribute can register themselves in the portal.
iii. The shortlisted applicants would deposit their funds with Railways/nominated agencies like RITES/RAILTEL etc.
iv. Projects to be funded under this are:

India launches new digital bridge with Africa through e-VidyaBharati and e-ArogyaBharati Network Project
On 10th September 2018, External Affairs Ministry signed an agreement with the Telecommunications Consultants India Ltd. (TCIL) in New Delhi, to set up a pan-African e-network between India and Africa.

Key Points:
i. It was organized by the Department of Administrative Reforms and Public Grievances (DAR&PG), Government of India and Government of Madhya Pradesh.
ii. Delegates from 12 States and 2 UTs participated in the conference.
iii. It consisted of 5 Technical sessions in the 2-day conference.
iv. The themes of the sessions included: ICT Enabled Education, Agriculture, Public Service and Grievance Management and Good Governance initiatives.
v. Session on Citizen centric Services was also made.

181: helpline for women in distress launched by Goa government
On September 11, 2018, the Women and Child Development ministry of Goa launched a helpline service for women in distress in the state.
i. The helpline number is : 181 and will be operated by GVK-EMRI along with the ministry.
ii. It would provide counselling, guidance, information, as well as deal with cases of domestic violence.
iii. It will help in solving crimes against women more efficiently.

Other News:
i. The government also partnered with Gomantak Lokseva Trust Mahilashram, Assagao, where rescued women would be given asylum.
ii. The Goa State Infrastructure Development Corporation (GSIC) has invested Rs. 8 crore for the construction of a centralised location at Merces for the North Goa and South Goa child welfare committees and the ministry of woman and child development.
♦ Director of Women and Child Development: Deepak Dessai.

Ethanol plant: Haryana Government inks MoU with IOC to stop straw burning.
On September 11, 2018, the Haryana government signed a Memorandum of Understanding (MoU) with Indian Oil Corporation (IOCL) to set up an ethanol plant at village Bohali in Panipat. 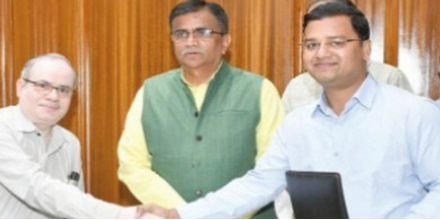 i. The Mou was signed by:

ii. It would be valid for a period of one year.
iii. The project would have a cost of over Rs 900 crore.
iv. It would have a capacity of 100 kilolitres of ethanol per day which will prevent straw burning and manage crop residue.
v. Raw fuel to the plant would be provided by 10 cooperative and three private sugar mills in Haryana.