The document Indian Economy on the Eve of Independence – Notes, Class 11 | EduRev Notes is a part of the Commerce Course Economics Class 11.
All you need of Commerce at this link: Commerce

Indian Economy on the Eve of Independence

1. Low level of income and economic development during the British rule(a) Before British rule India had following features

(b) During British Rule: Economics policies pursued by colonial government in India with concern with more with protection and promotion of their own economic interest and brought fundamental change in the structure of economy.

(c) Low level of National income and per Capita Income: No attempt was made by British Government to estimate India’s national and per Capita income some attempts made by Dadabhai Naoroji, William Dig by, V.K.R. V. Rao and R.C. Desai. But they were conflicting and inconsistent results.

Studies reveal that countries growth of aggregate real output (G.D.P.) during the first half of 21th century was less than 2% and 0.5% growth in per capita income per year. 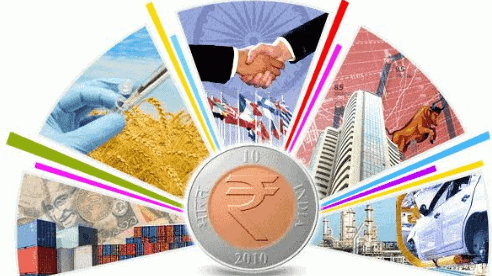 6. Occupational StructureIt refers to the distribution of working person across different industries and sectors.(a) Pre dominance of Primary Occupation

7. InfrastructureIt refers to the basic physical and organizational structure and facilities required for the operation of an economy.(a) RailwaysIntroduced in 1850Operation 1853

(b) Colonial motives behind Railways