Consider an arbitrary message denoted by xi. If the probability of the event that xi is selected for transmission, is given by

Then, the amount of the information associated with xi is defined as

Specifying the logarithmic base ‘a’ determines the unit of information. The standard convention of information theory takes a = 2 and the corresponding unit is the bit, i.e.

a) If we are absolutely certain of the outcome of an event, even before it occurs, there is no information gained, i.e.

b) The occurrence of an event either provides some or no information, but never brings about a loss of information, i.e.

c) The less probable an event is, the more information we gain when it occurs.

d) If two events xi and xj are statistically independent, then

Entropy of a source is defined as the average information associated with the source. Consider an information source that emits a set of symbols given by

If each symbol xi occurs with probability pi and conveys the information Ii, then the average information per symbol is obtained as

This is called the source entropy. Again, substituting equation

into above expression, we get the more generalized form of source entropy as

Following are some important properties of source entropy.

a) In a set of symbol X, if the probability pi = 1 for some i, and the remaining probabilities in the set are all zero; then the entropy of the source is zero, i.e

b) If all the n symbols emitted from a source are equiprobable, then the entropy of the source is

c) From above two results, we can easily conclude that the source entropy is bounded as

where T is the time required to send a message. If the message source generates messages at the rate of r messages per second, then we have

Substituting it in above equation, we get the more generalized expression for the information rate of the source as

An important problem in communication is the efficient representation of data generated by a discrete source. The process by which this representation is accomplished is called source encoding. Our primary interest is in the development of an efficient source encoder that satisfies two functional requirements:

a) The code words produced by the encoder are in binary from.

b) The source code is uniquely decodable, so that the original source sequence can be reconstructed perfectly from the encoded binary sequence.

Assume that the source has a set of n different symbols, and that the ith symbol xi occurs with probability

Let the binary code – word assigned to symbol xi by the encoder have length Ii measured in bits. Then, the average code – word length is defined as

Where H(X) is the entropy of the source, and k is the number of symbols in encoding alphabet. Thus, for the binary alphabet (k = 2), we get the minimum average code – word length as

The coding efficiency of a source encoder is defined as

Where is the minimum possible value of

. Substituting the value of

in above expression, we get the more generalized form of coding efficiency as

Where H(X) is the entropy of the source, k is the number of symbols in encoding alphabet, and

is the average code – word length. Thus, for the binary alphabet (k = 2), we get the coding efficiency as

An efficient code can be obtained by the following simple procedure, known as

Following are the steps involved in Shannon – Fano coding of a source symbol:

Step 1: The source symbols are first ranked in order of decreasing probability.

Step 2: The set is then partitioned into two sets that are as close to equiprobable as possible

Step 4: The above process is continued, each time partitioning the sets with as nearly equal probabilities as possible, until further partitioning is not possible.

Or we can represent this coding as:

It can be understood by the example given below- 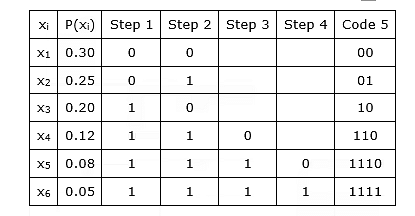 Basically, Huffman coding is used to assign to each symbol of an alphabet a sequence of bits roughly equal in length to the amount of information conveyed by the symbol in question.

Following are the steps involved in Huffman encoding coding of a source symbol:

Step 1: The source symbols are listed in order of decreasing probability.

Step 2: The two source symbols of lowest probability are assigned a 0 an a 1.

Step 3: These two source symbols are regarded as being combined into a new source symbol with probability equal to the sum of the two original probabilities. (the list source symbols, and therefore source statistics, is thereby reduced in size by one.)

Step 4: The probability of the new symbol is placed in the list in accordance with its value.

Step 5: The above procedure is repeated until we are left with a final list of source statistics (symbols) of only two for which a 0 and a 1 are assigned.

Step 6: The code for each (original) source symbol is found by working backward and tracing the sequence of 0s and 1s assigned to that symbol as well as its successors.

Or we can understand Huffman coding as:

Discrete memoryless channels are completely specified by the set of conditional probabilities that relate the probability of each output state to the input probabilities. 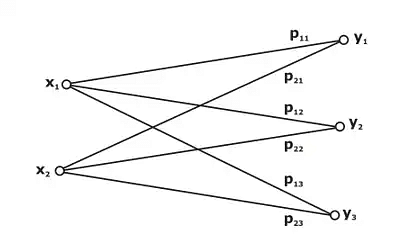 Then, the relation between the input and output probabilities are given by

In general, we can understand it as:

A channel is completely specified by the complete set of transition probabilities.

If P(X) is represented as a diagonal matrix

The joint entropy of the system is obtained as 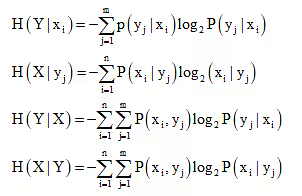 The mutual information I(X; Y) of a channel is defined by

Also, we can define the mutual information as

The channel capacity is defined as the maximum of mutual information, i.e.

Substituting above equation, we get the channel capacity as

This result can be more generalized for the Gaussian channel. The information capacity of a continuous channel of bandwidth B hertz is defined as

where S/N is the signal to noise ratio. This relationship is known as the Hartley – Shannon law that sets an upper limit on the performance of a communication system. 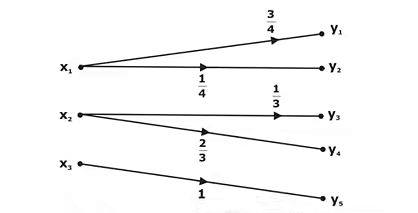 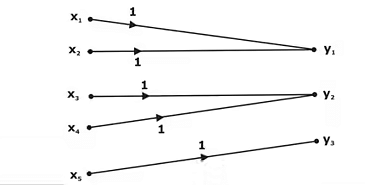 A channel is called noiseless if it is both lossless and deterministic. A noiseless channel is shown in below figure. The channel matrix has only one element in each row and in each column, and this element is unity. Note that the input and output alphabets are of the same size; that is, m = n for the noiseless channel.

The binary symmetric channel (BSC) is defined by the channel diagram shown in below figure, and its channel matrix is given by: